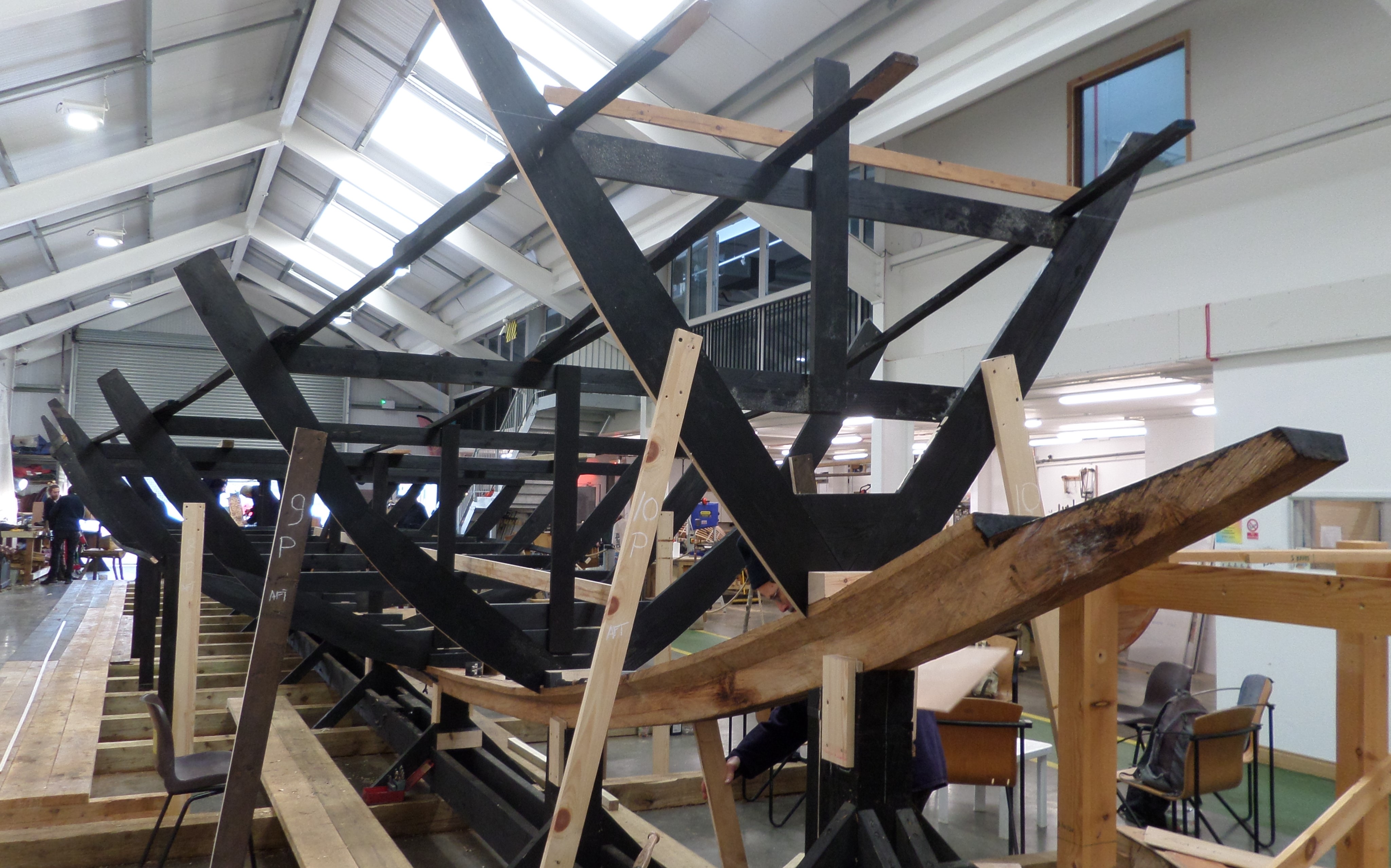 All of these components have to be shaped with extended side ‘projections’ in order to allow the planks to be attached to them. These ‘wings’ can be referred to as the ‘Lands’. The area where planks overlap each other are also called ‘lands’. The cross sections of keel and cutwaters are in Shipshape 5 and it can be seen that in order for the rivets to be clenched on the inside of the extending timbers they have to be hollowed or dished.

The way that the planks meet these ‘backbone’ timbers varies. The keel and the planks on either side of it, called Garboards, lie side-by-side with their grain going in the same direction, but the planks higher up on the hull will gradually begin to meet the underlout and cutwater timbers with their ends. These planks will also have followed the curving outside of the ship, so they will be approaching the cutwaters at an angle. This angle changes for each plank and it is difficult to determine the exact angles until all the keel components are assembled with some guiding frames in place. The ends of the joining planks are called the ‘Hood Ends’ and they will be recessed into a Rebate.

Hollowing the top of the bow underlout.

When the original ship was excavated it was thought that the keel would be joined to the other timbers with large spikes passing through scarf joints. Some spikes were found at one end where one of the joints might be, but there was no further evidence of them at the opposite end of the craft and so, it is not certain how the timbers were fixed to each other. In Volume 1 (see Investigation 1. in Ship) these scarf joins and their positions is a major issue. Six and a half pages of text (commencing Pg. 392) with five pictures and illustrations are devoted to the problems of trying to decide where the scarfs were, their dimensions, and how they were fixed.

To try to summarise: 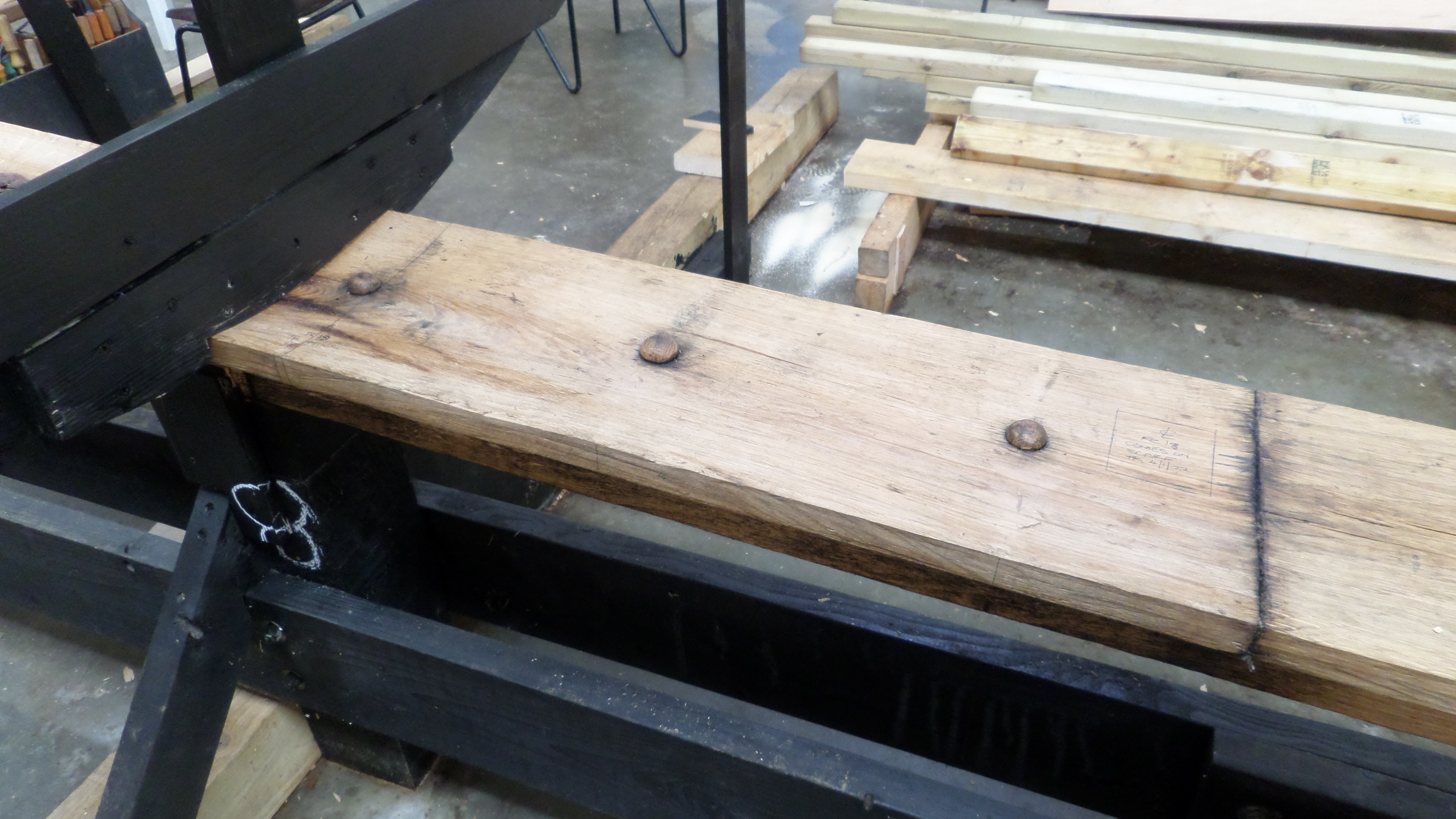 As with many aspects of the reconstruction there is a mystery here, to be evaluated. Since the 1939 excavation everyone has been able to speculate without drawing conclusions, but that has been no longer possible for the builders, this time. The double-scarf or ‘underlout’ allows the length of the curved timbers required to be reduced and the grain pattern to be stronger; it makes handling them more manageable. There is nothing to say that this method was not used in the original ship, so this is the system that has been adopted.

Volume 1 raises the possibility of using ‘Stealers’, but concludes that they were NOT used. This refers to a clever modification of the timbers at bow and stern used on some later Scandinavian craft. The problem of attaching the narrow, weak, ends of the strakes to a rebate in the cutwater timbers was overcome by carving the shape of the whole cutwater timbers to include the plank ends.They then appeared to have the ends already attached. This effectively moved the Hood-end's actual attachment further back into the craft where the planks were wider and stronger. It also staggered the weakness of the plank ends, so they were not concentrated in a single, short space. 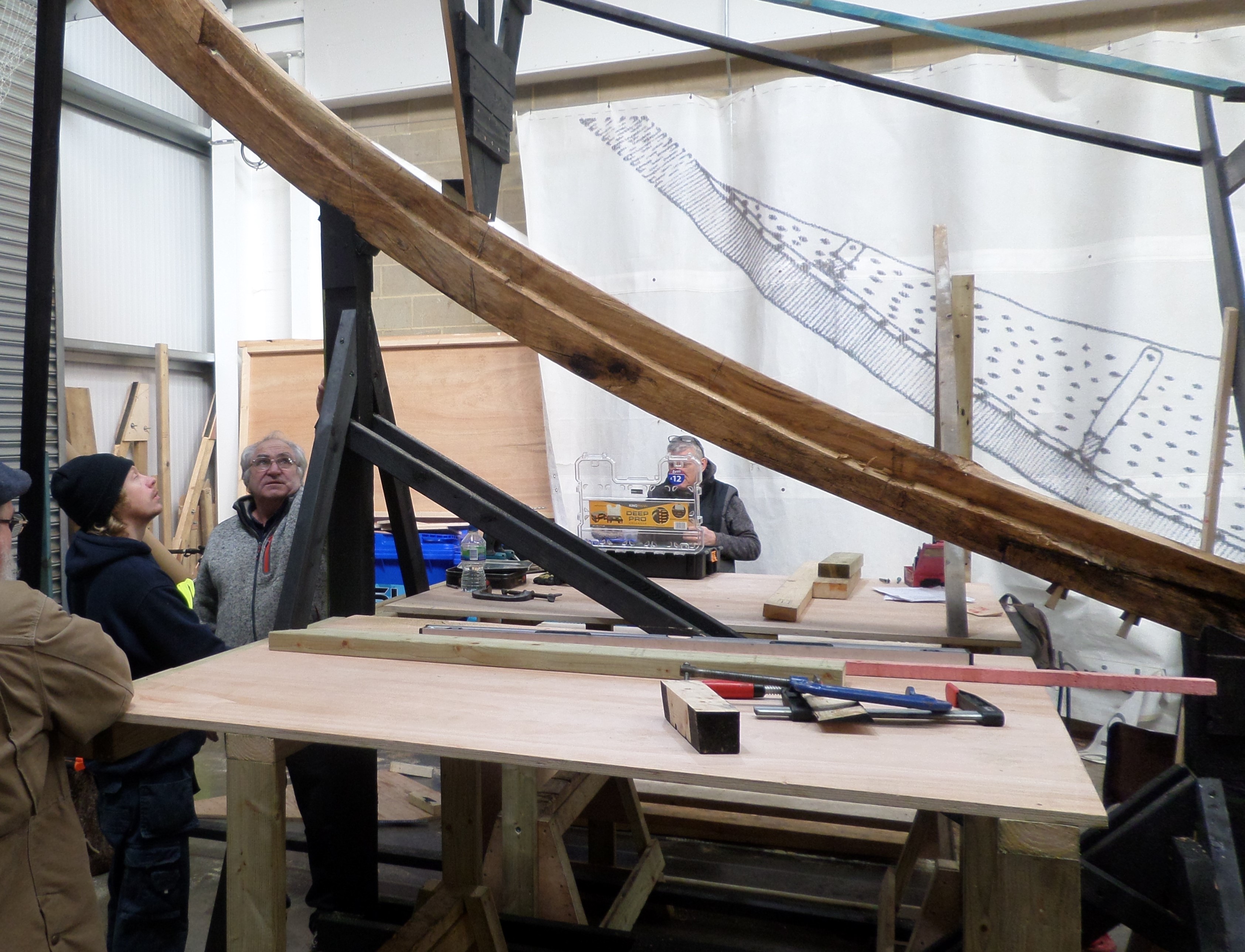 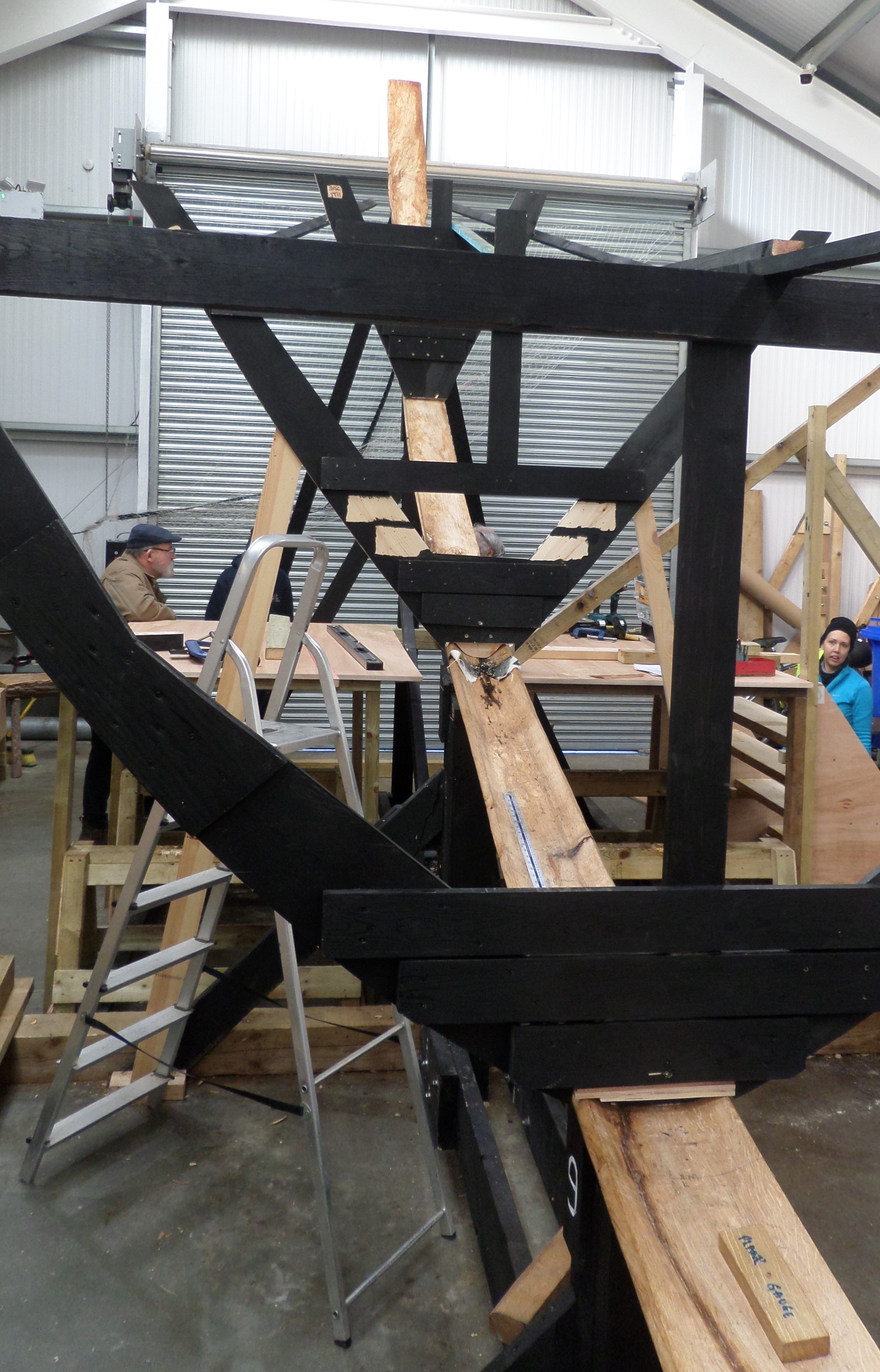 The Stern Cutwater was raised first and attached to its underlout with trenails. In the left picture the oak trenails with their willow wedges inserted can be seen projecting from the timber (lower right corner). The rebate to take the hood ends is visible in the cutwater. The guide frames for the stern are in place. The banner illustration on the wall behind the ship which was the first-ever full-size image, is not the same way round as the reconstruction. The banner has the bow at this end. The ship is being constructed with its bow towards the river, so that it can be taken out and launched directly into the water, bow first.

Safety. Working on the ship means following modern, safety, working practices. To work on the upper regions of the bow and stern means that access staging had to be put in place. 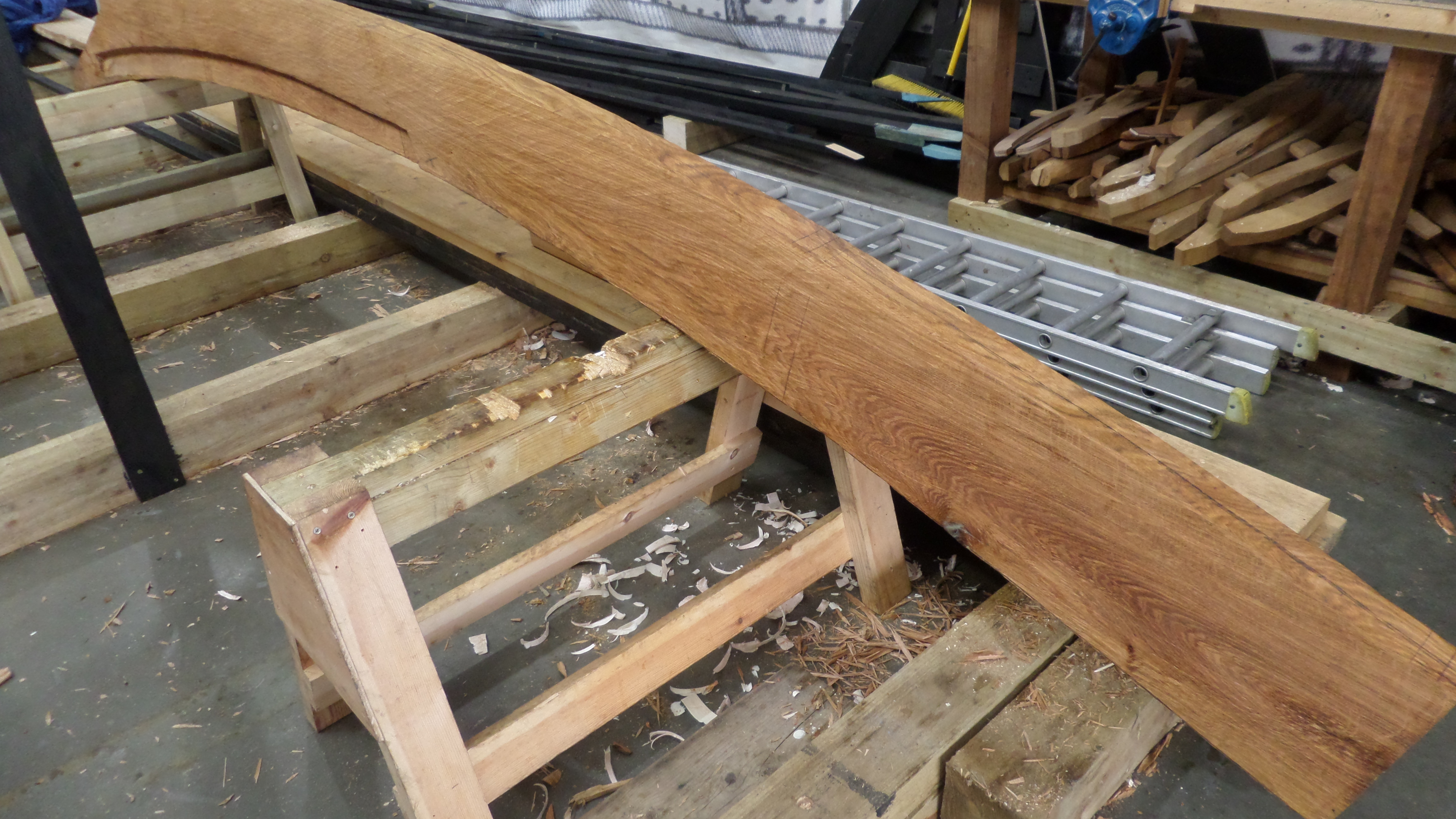 The bow cutwater ready for fitting. The top of the bow is closest. The underlout to bow scarf with Alec and David Steptoe pondering the work. The trenail holes are bored. The curved, projecting lands axed by David, can be seen close to his shoulder. 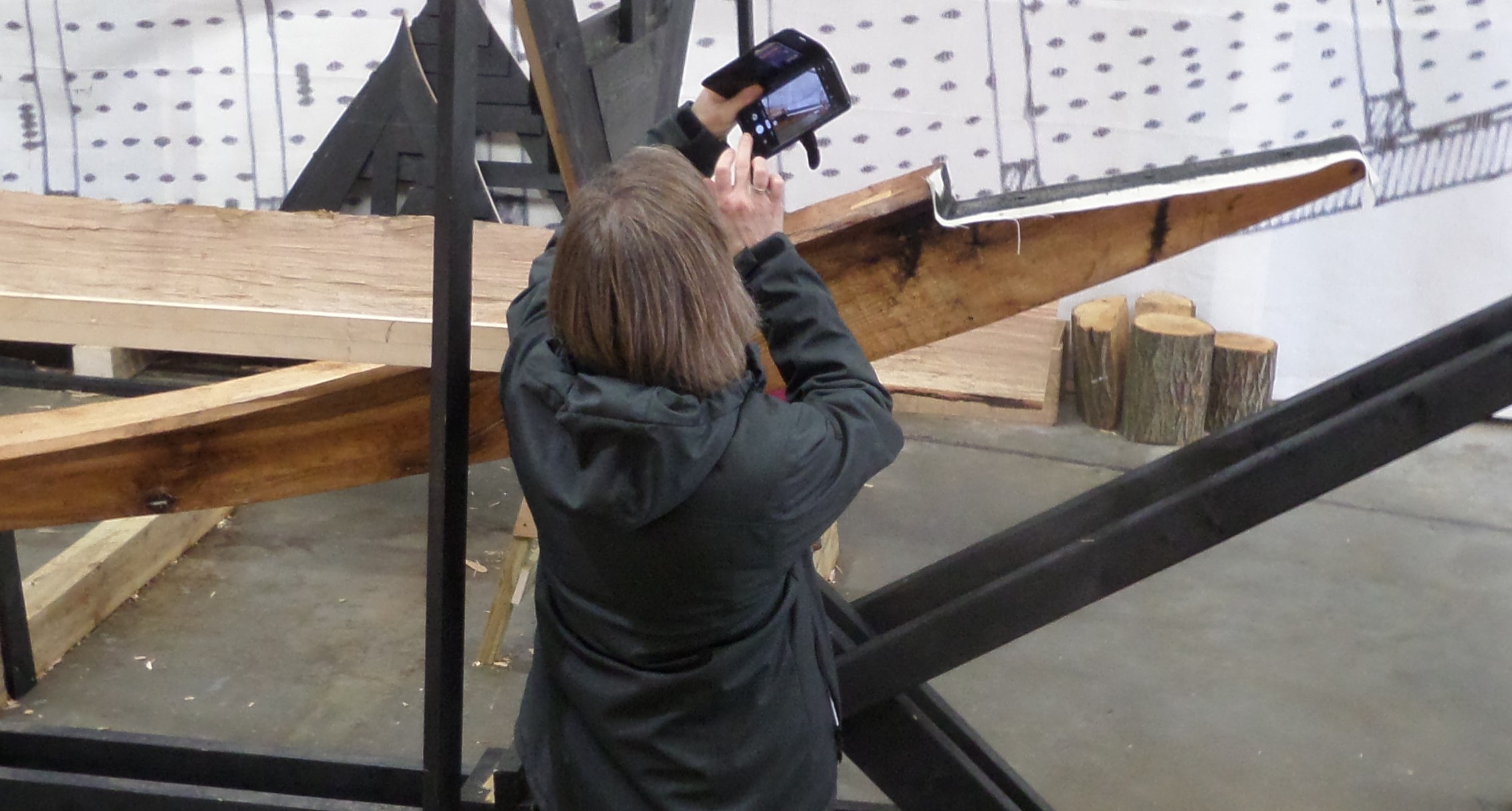 Helen Geake better known as a former Time Team presenter, takes pictures of the bow/underlout scarf. It had been prepared with a broad strip of pure woollen cloth (white), impregnated with a mixture of pine tar softened with a small addition of linseed oil (black). The timber was moved with two engine hoists (above right). Anglo-Saxons would have used manpower. 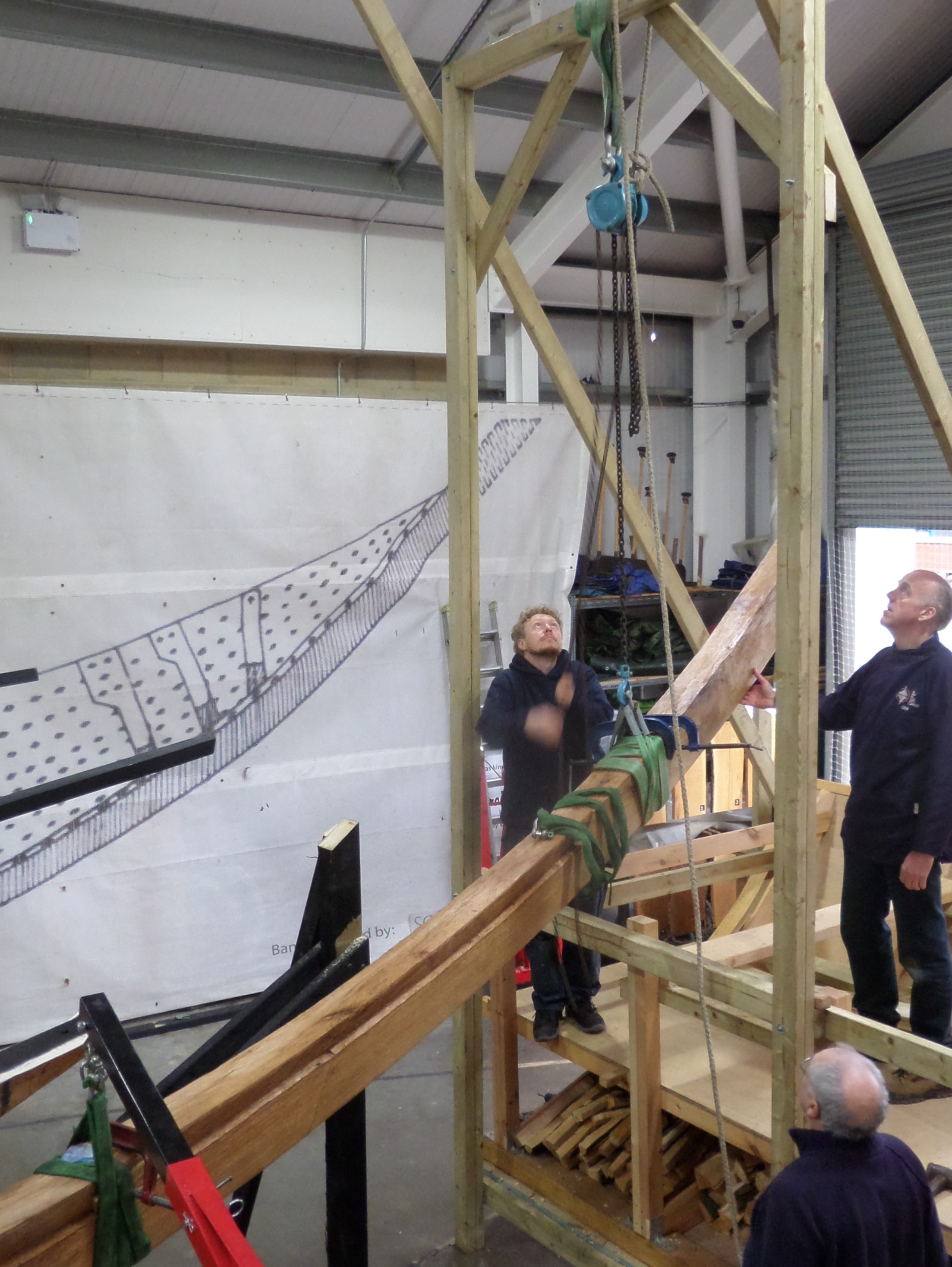 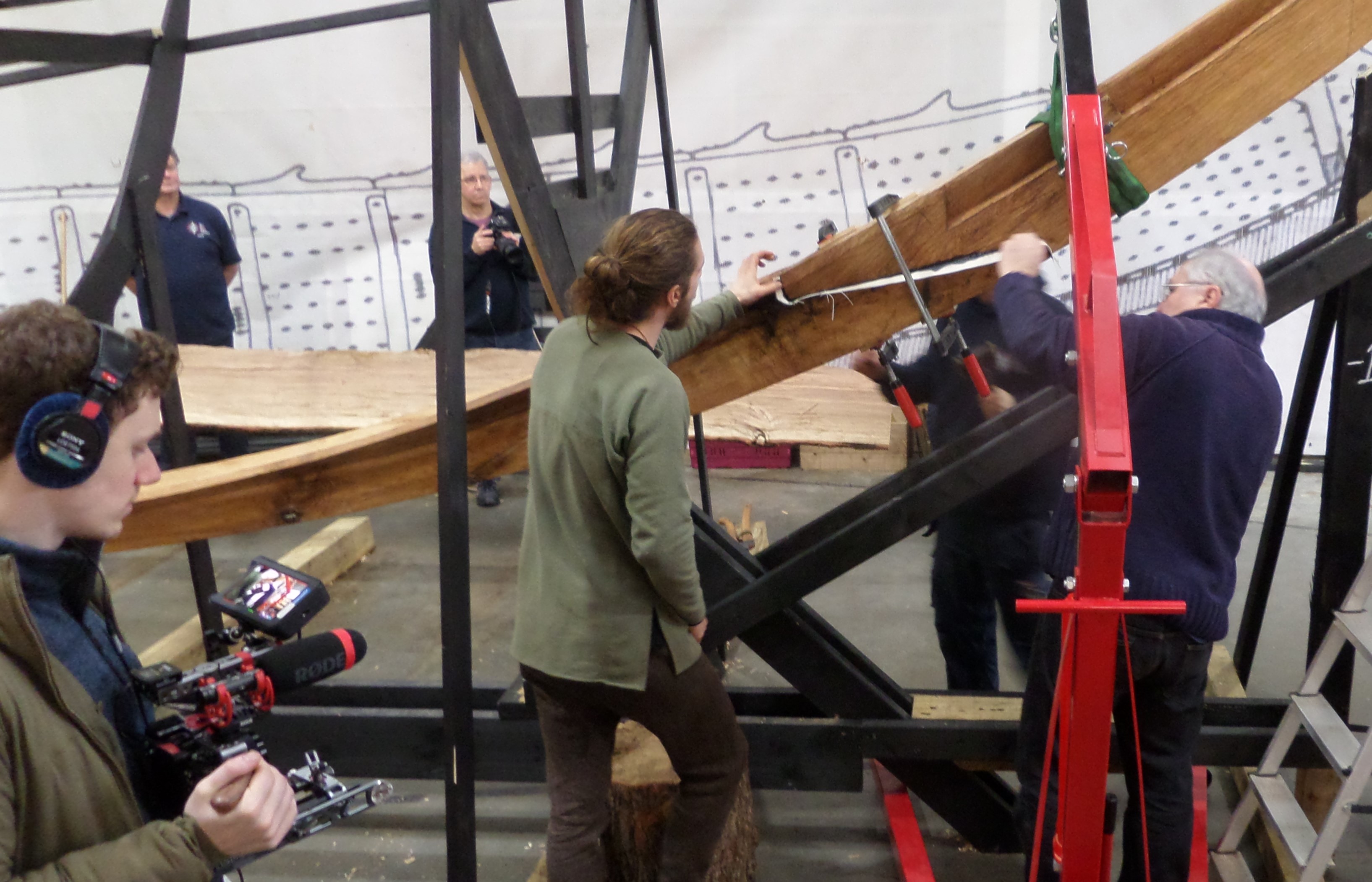 (Left) The forward sling was moved from the engine hoist to a chain hoist set up on a temporary gantry to lift the forward section of the cutwater to the correct height, when the two scarfs could be aligned. Temporary cramps were used and a horizontal beam attached to the gantry to support the timber.

(Right) The alignment is critical. A TimeTeam cameraman can be seen recording the process for future television programmes. Below) Helen Geake and Jacq Barnard the project leader, stand on the stern staging to sight along the ship to see its total length for the first time - an experience that Jacq described as 'emotional' after all the work over the years.

The final positioning of the backbone timbers took place in February 2022 with this raising of the Bow Cutwater. It was a major step in the construction process as for the first time the whole of the form of the ship could be seen three-dimensionally mapped out by the guide frames, keel, stem and stern. That part of the team present at this key moment could not resist a deserved team picture. 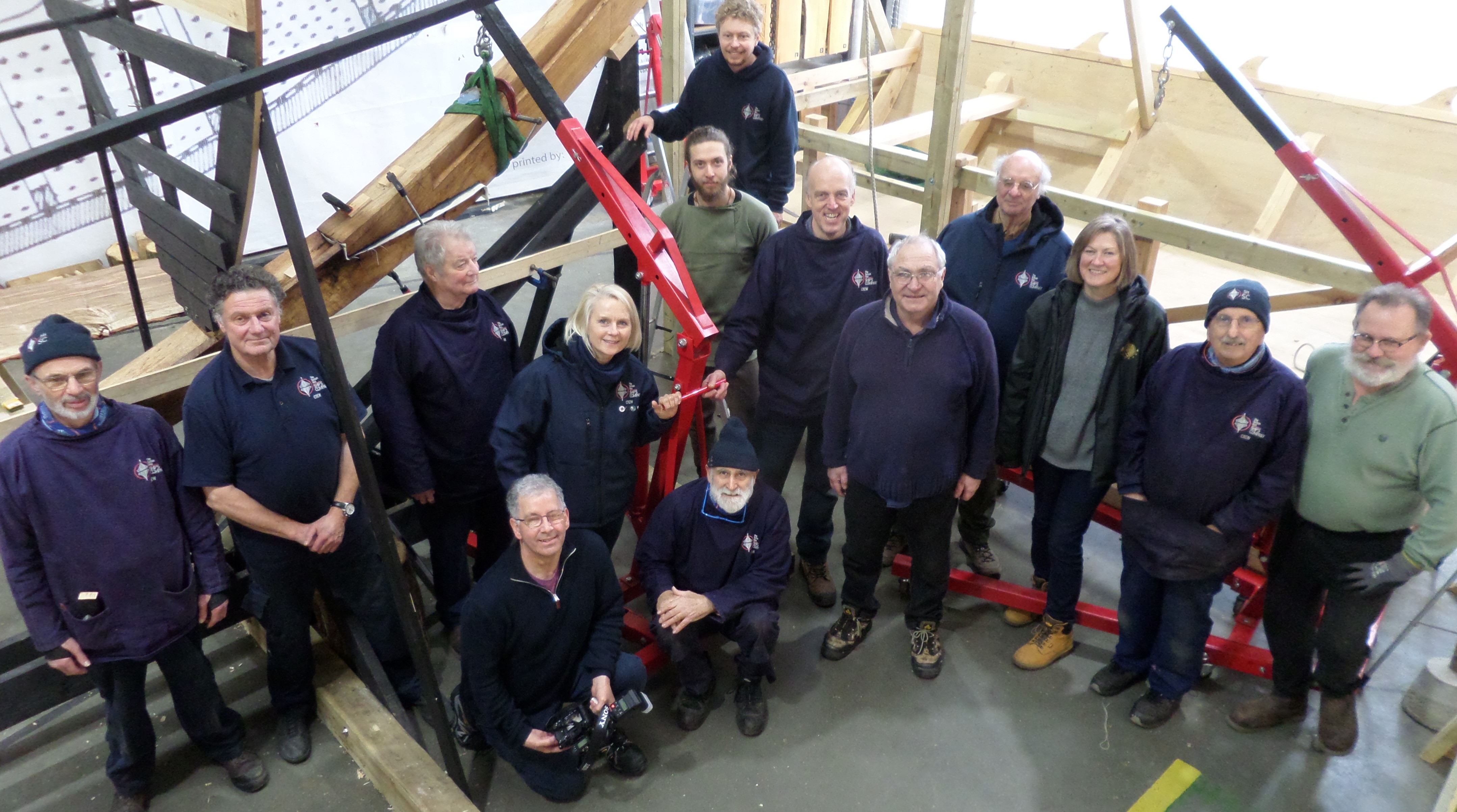