All historic, reconstructed ships have their own specific points of interest, but Hjortspring is probably the most amazing and fascinating. 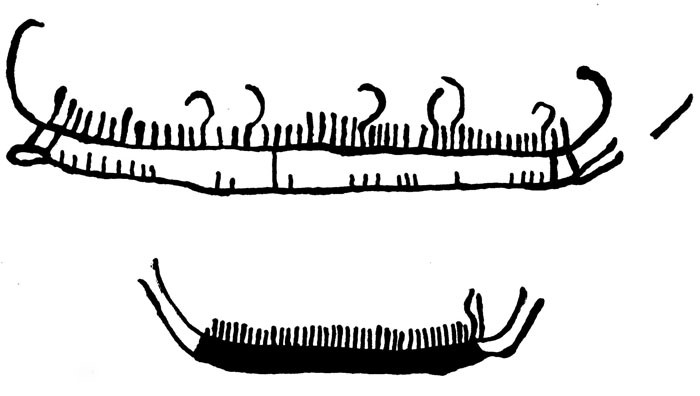 The story of this ship begins with Scandinavian rock art. Images scratched into the rock with stones or chiselled onto rocks possibly in the Late Bronze Age and Early Iron Age.The most common images were of boats, but strange boats that were difficult to understand. Many images seemed to portray sea-warfare. In these images - Are the vertical lines people? Are they spears? Are they oars? What are the long extensions at  front and back? Could they be twin-hulled craft like catamarans?

For a long time such questions occupied the minds of historians for them to theorise about. Perhaps the greatest mystery was - How were they made? Could they have been skin boats? Stretching animal skin across a framework to make a coracle or curragh can produce a strong lightweight structure. Could they be of timber construction? In the 1920s one was found in South Denmark. 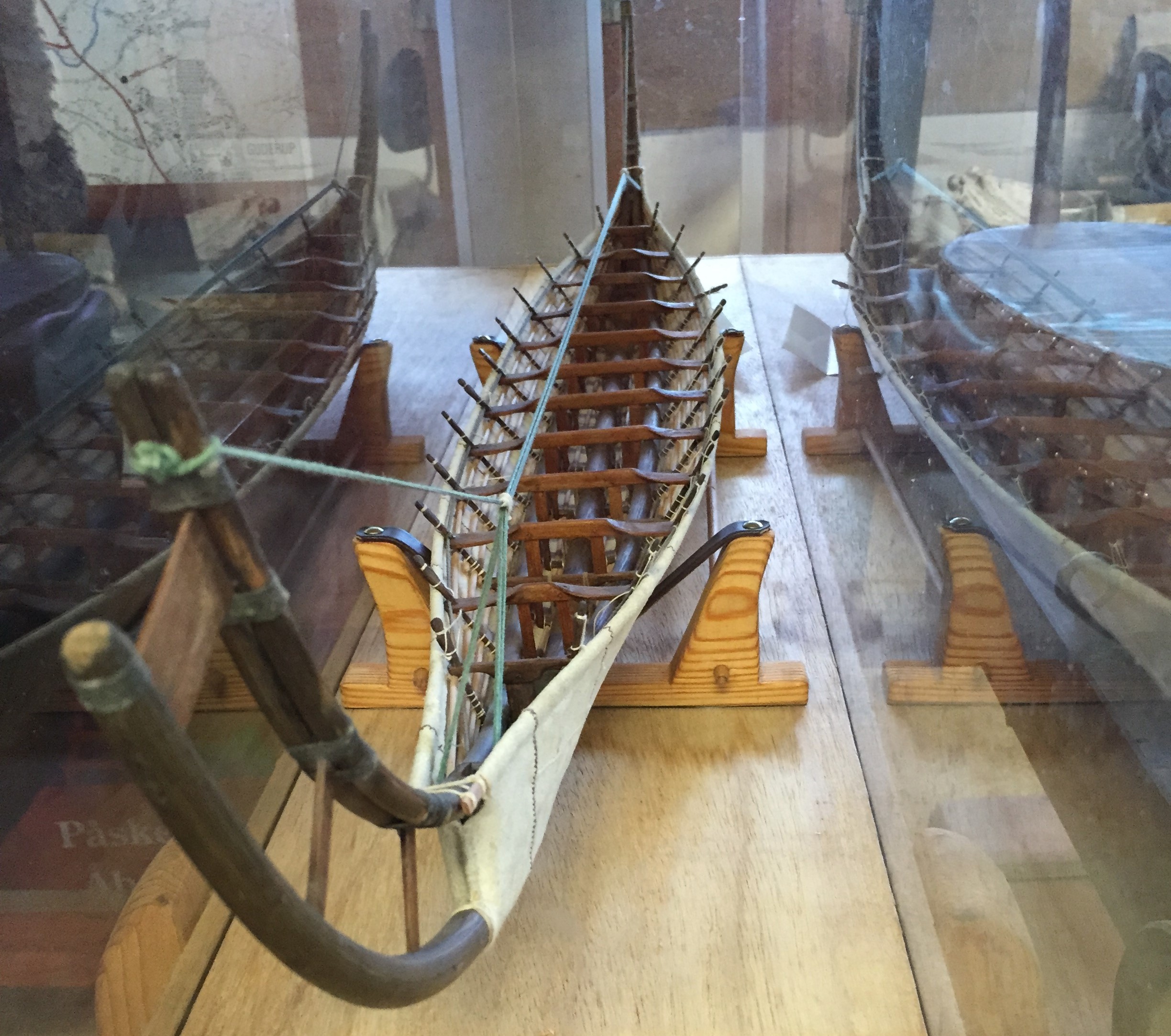 Just like the Nydam ship this one had been sunk along with all the equipment from the conquered enemy. As there are only places for 20 paddlers it is a bit of a mystery as to why the bog where the ship was discovered had more than 130 shields with similar amounts of other weapons. It seems to indicate a fleet of ships rather than just one. Much has been learned from these offerings. 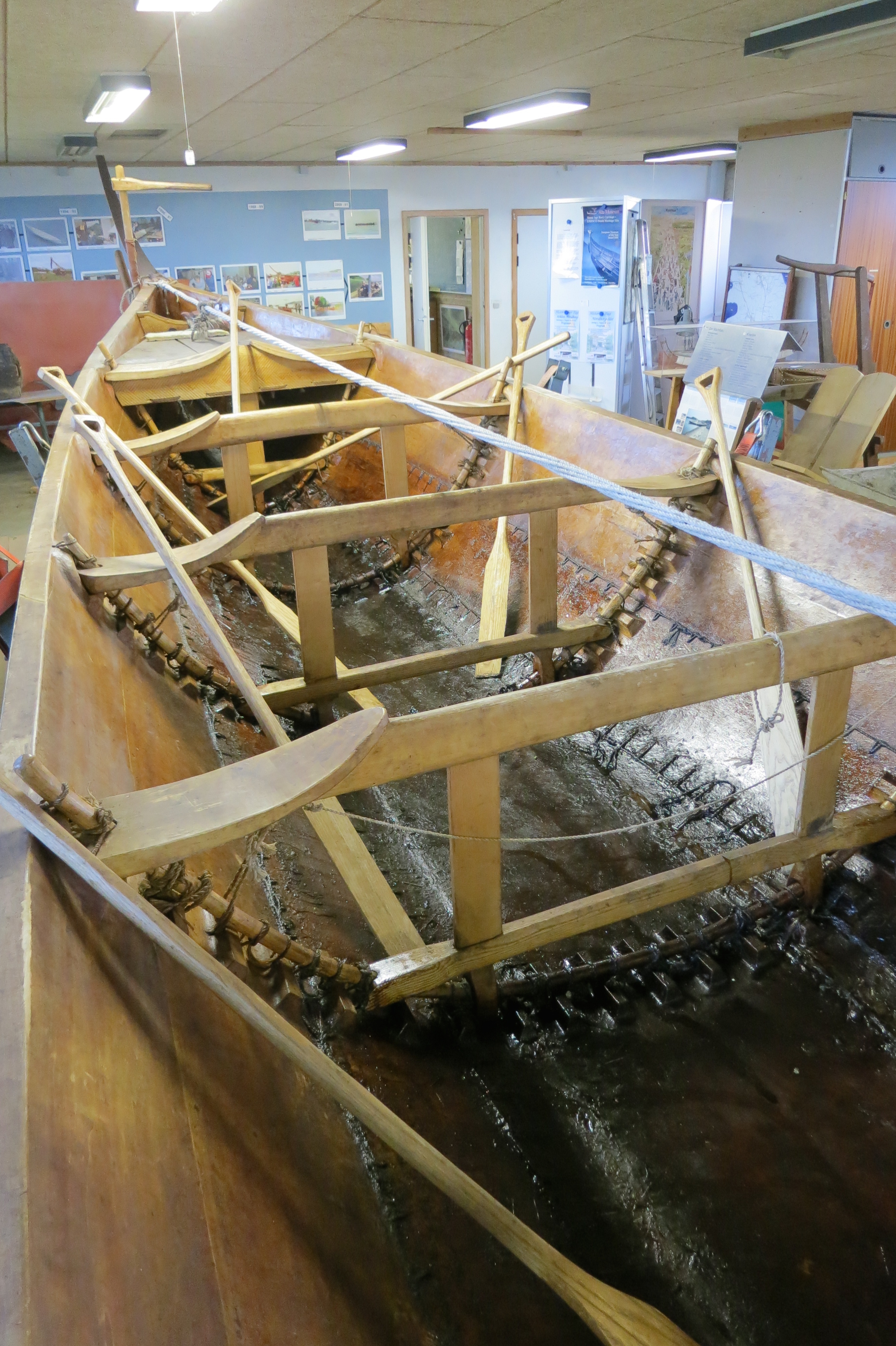 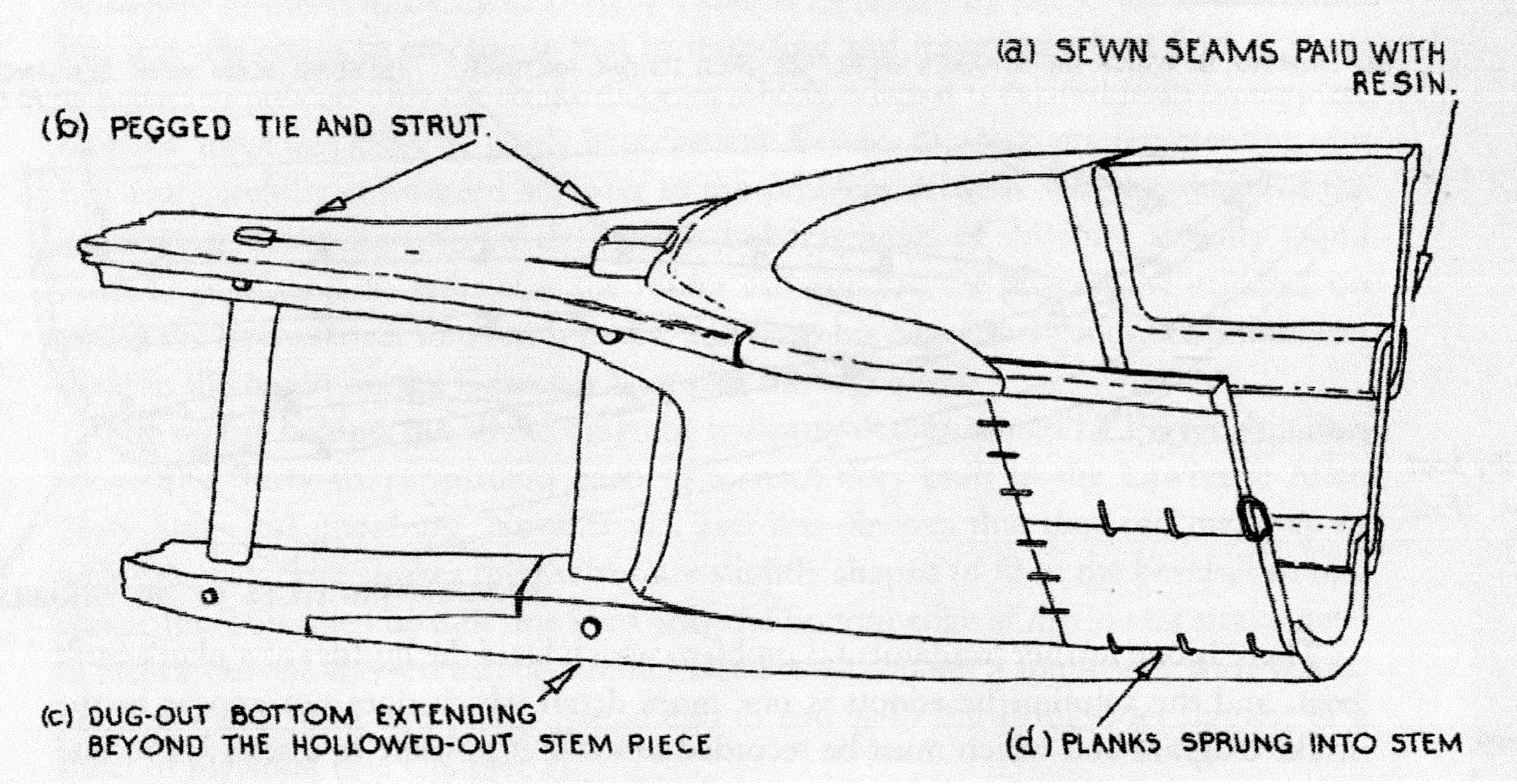 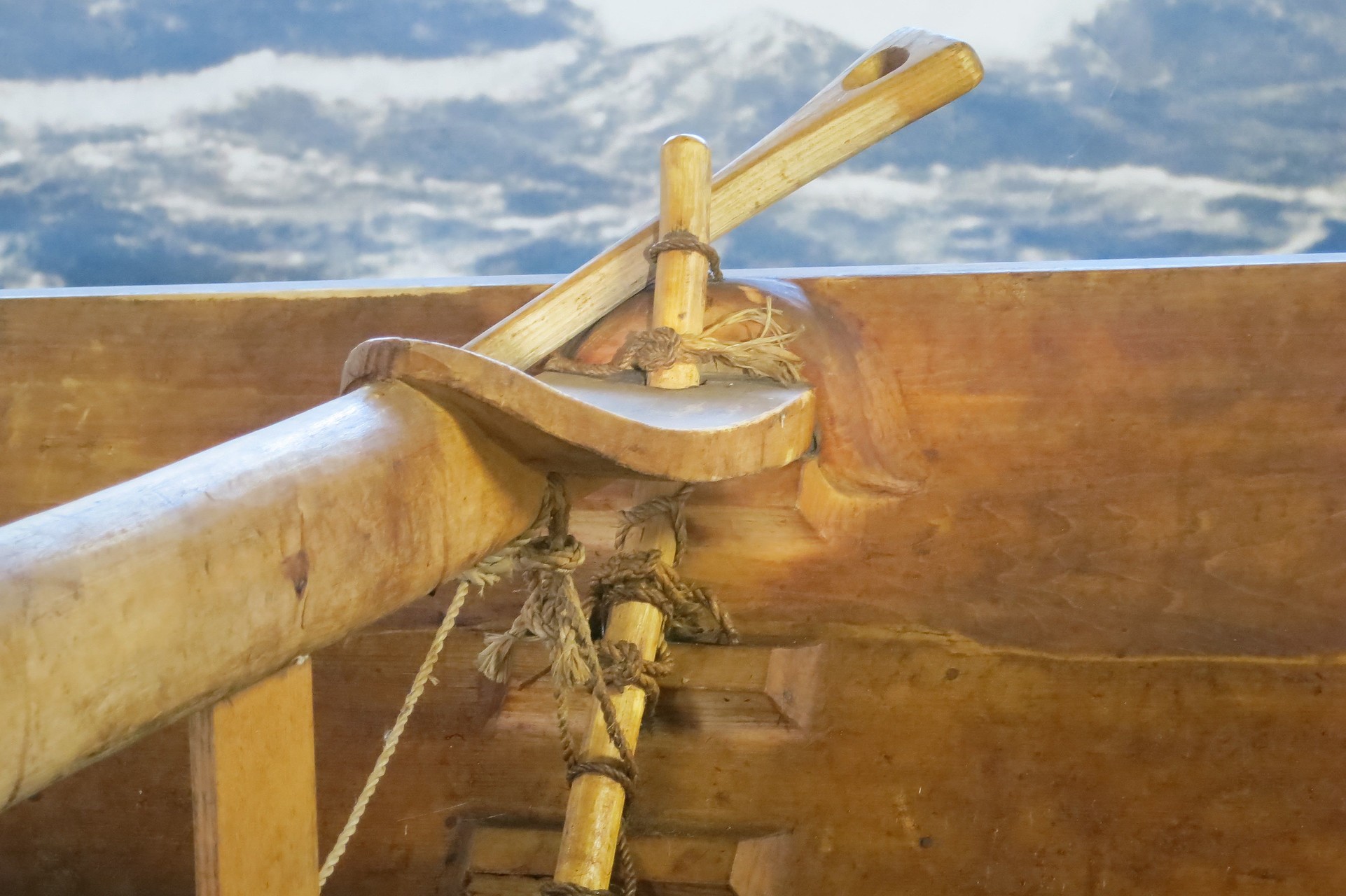 The ship was made of lime-wood planks sewn together with lime-bast rope. It was quite a challenge to find trees of sufficient size for the reconstruction. They were sourced from Poland. The bent hazel ribs are tied to cleats carved from the solid, like those in the Nydam ship. A fundamental difference is that this ship was paddled not rowed. There is a great deal of difference in the two propulsion systems. Paddling allows the crew to observe where they are going and possibly have a greater input in the actions of the craft. Scooped seats can be seen secured in place on each gunwale. Every effort has been made to lighten the craft by rounding off all corners. As illustrated in Investigation 3 on this website in the discussion about keel rocker, this ship uses a hogging truss to keep the ends elevated. It has a dugout keel and decking at the ends. 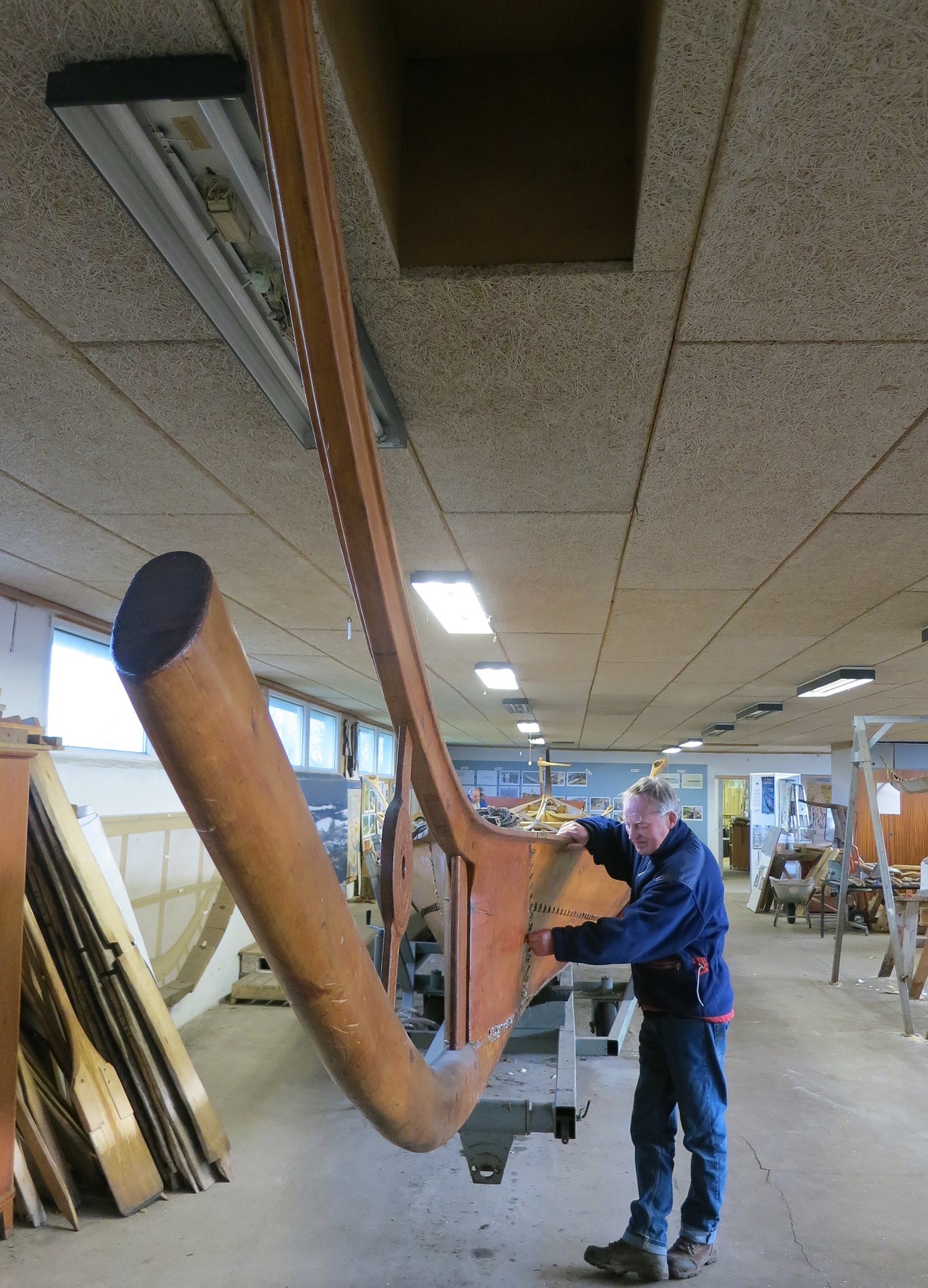 What about those projecting ends? They are so clearly illustrated in all the drawings, but it was still a surprise to see them. The rock-art drawings showed the ships being used in conflict - some kind of naval battle? Imagine the difficulty of this process. These craft are so lightweight and manoeuvring them would have taken great experience and coordination of the paddlers. If the two combatant craft are alongside each other, fighting would take place between the nearest half crew to the other craft. Tricky in such an unstable boat.

The most instantly effective way of dealing with the enemy might be not to fight hand to hand, side by side, but to capsize the enemy instead. When you stand in the room with the craft (left) it can be seen that the lower (keel) projection extends higher than the gunwale level of the ship. If the bow of your craft could be manoeuvred to hit the opposing craft amidships, your bow would ride up and over the enemy's gunwale, tipping their boat and spilling the crew into the water where they would be at your mercy.

It must said that this is wholly theoretical. There could be a totally innocent function, such as to ease lifting or to help when running the ship onto the shore, but it is interesting to speculate. In one rock art drawing a ship is shown with deer antlers decorating the bow. An indicator maybe?

It can be seen that the Hojortspring team take very aspect of their project seriously, just as the Nydam team do. They made all their own clothes as authentic to the period as possible. Operating the craft was an important social activity for all the historic groups.