Defining the hull shape of the ship (2)

Joe Startin has done a great deal of research relating to the ship and produced a number of detailed papers. To the uninitiated it would seem a simple matter to decide what shape the ship was and then reconstruct it. This is not so. The story of the ship, its hurried excavation and subsequent damage makes it very difficult to come to a definitive form. If ten experts were to examine it, they would come to at least ten different interpretations. In the final analysis whatever shape is constructed it will be an interpretation. Strictly speaking, even the very first drawings made in 1939, upon which all others should be based, were interpretations. Joe's draft document was dated October 2018,

What follows may give just a small indication of the complexity of the issues to be faced. They would near impossible to understand without Joe’s explanations printed in black below.

Explanations by Paul Constantine are in blue.

Concerning the hull, there is no more data than they had in 1975.

It is known that the people behind Volume One (1975) were immersed in the data, and very capable. We know that the published results in Bruce-Mitford, 1975, did not convince some experts that the information for a useful reconstruction was available.

We believe the value of the 1939 drawings has been underestimated.

We have computer-aided methods to help us handle the available information in ways beyond the scope of the situation in 1975.

As we have no new data, we have to be very clear about our understanding and the use of what we have available. Whether this is claimed to be the position of a location on the outside of the hull, or the position of a certain part of a rivet, it must be explained how we got it and how much reliance we want to place upon it. The explanations may be long and tedious because of adjustments made for individual archaeological features, varying levels of uncertainty and compromises made between different sources.

Philips 1940a, 1940b and 1940c give useful descriptions and some general idea of overall dimensions. As a guide to hull shape they are very limited.

What is useful is what is available from the ‘Lines plan’ included in Science Museum, 1939.

There are no working papers to back up this ‘Lines plan’. Any associated Science Museum records and any records from Commander R K D Hutchison who led the survey are known to have been destroyed. Hutchison was a retired Lieutenant Commander who was Keeper of the Department of Ship’s Models at the Science Museum. He died serving as an Acting Commander in 1944.

There is a paper, Crosley, 1942, which describes some of the survey process.

A S Crosley was a Chief Draughtsman at the Science Museum. He died in 1981.

The British Museum has a large, high-quality photographic record of the 1939 ship. These photographs were mostly taken by the well-equipped and capable amateurs, Mercie Lack and Barbara Wagstaff. Many of the choicest examples can be seen in Bruce-Mitford, 1975 Volume 1.

My interpretation of the ‘Lines plan’ is that it is to the outside of the hull. This is speculation. My feeling is that Hutchison would be inclined, by temperament, to take a traditional approach. It also has practical benefits, because it leads naturally on to consideration of the displacement and the stability of the hull.

The description of the survey in Crosley, 1942, is sometimes not very clear. From the record:

A Datum line was stretched the length of the ship 10ft above the keel. Tension was maintained by securing it to stayed, upright posts outside the ship at either end. But there must have been a catenary (sag) in the middle to be allowed for if it was used for vertical measurements. Its function must have been mainly for alignment. 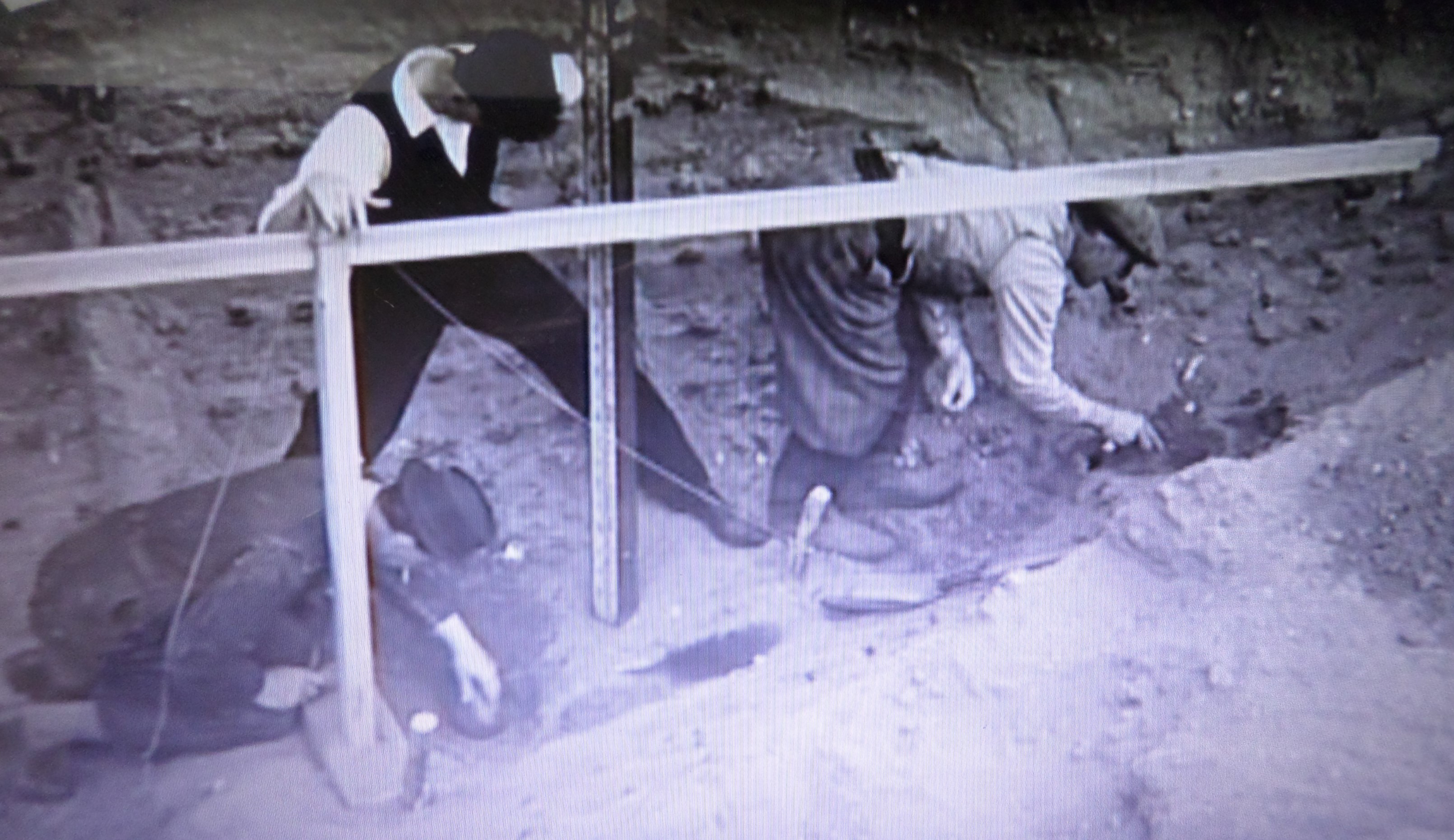 They had two 4ft tall post with heavy wooden bases made. A slot in the top of each upright housed a 14ft long, wooden beam that could slide back and forth within the slots. The uprights were positioned about 5ft apart across? the keel of the ship (Note. In his paper Crosley says the frame was set up across the ship, but all pictures show it being set up along the length of the ship. In practical terms it would make better sense to have it running along the keel. The word ‘across’ could be incorrect?) The rail was added, then its position was checked against the overhead Datum line by using plumb bobs. (Plural in his account, further reinforcing the surmise that it was along the keel.) When the location and alignment was correct, the frame was secured by using additional guy ropes as stays. 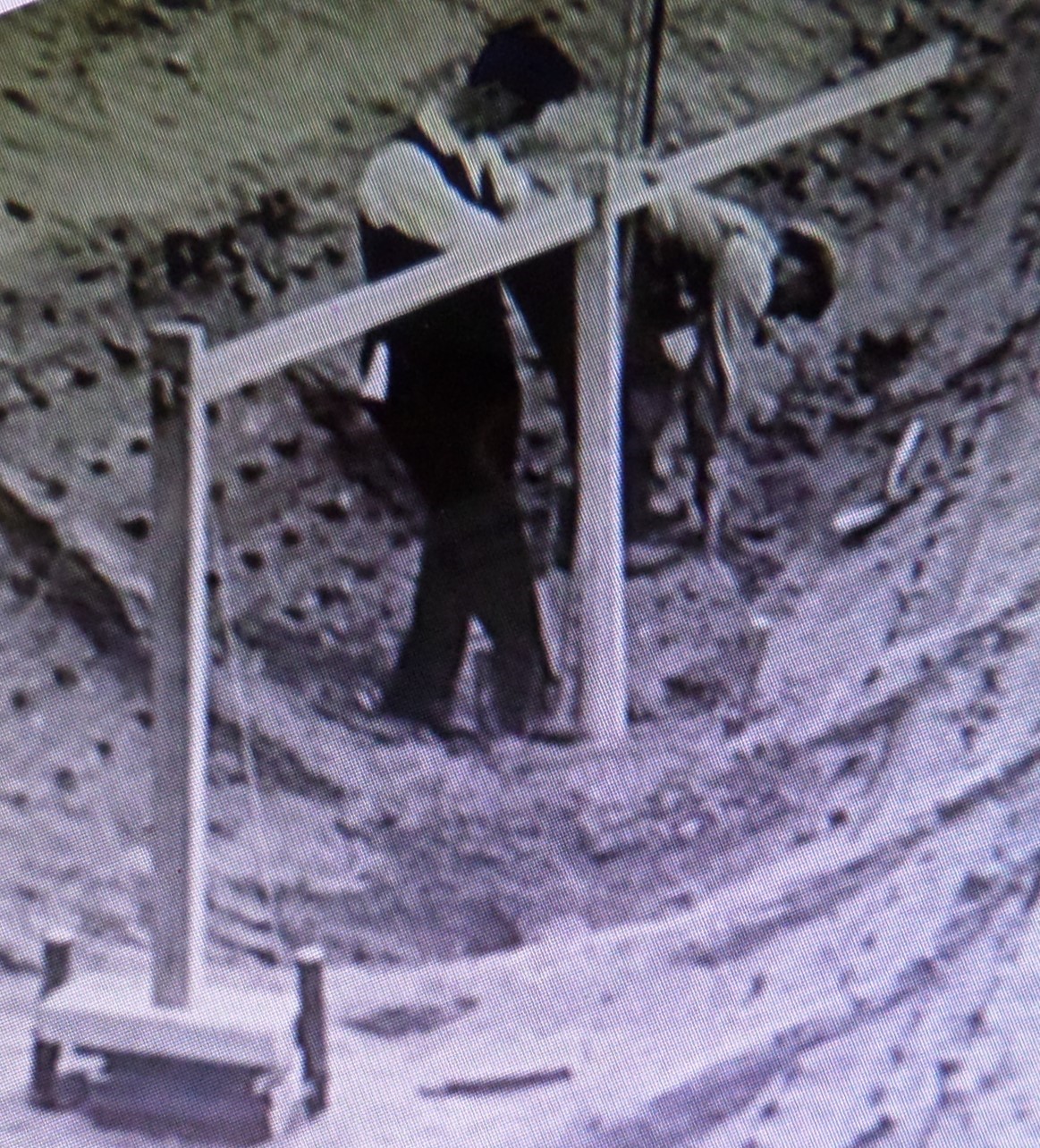 They started amidships and worked towards either end using various, smaller, wooden battens to measure across the ship at the different plank heights between, but close to, each successive rib and the sliding rail.

To take a measurement one end of a batten would be placed immediately ‘adjacent’ (see later discussion below) to a rivet near to a rib. The other end of the batten was lifted or lowered to make it level and the length to a plumb line, slung from the sliding rail was noted. At the same time the height from the keel at this point was noted.

The ribs were roughly 3ft apart, so it would have been possible to gather measurements from 3 or 4 ribs, for each setting up of the frame. Each rivet was positioned horizontally and vertically, using a rivet on either side of each rib, on each of the ascending, eight plank rows. There are 26 ribs. (See later calculations)

Where the line of the gunwale could be seen they also recorded that. They used the sliding-rail frame to measure the centre-line distance from rib to rib by using plumb bobs and by sliding the rail along they could check 4 frames from one, fixed position. At the narrowing ends of the ship they rigged up a device that looked like a child’s swing  to support one person, to gain access, whilst 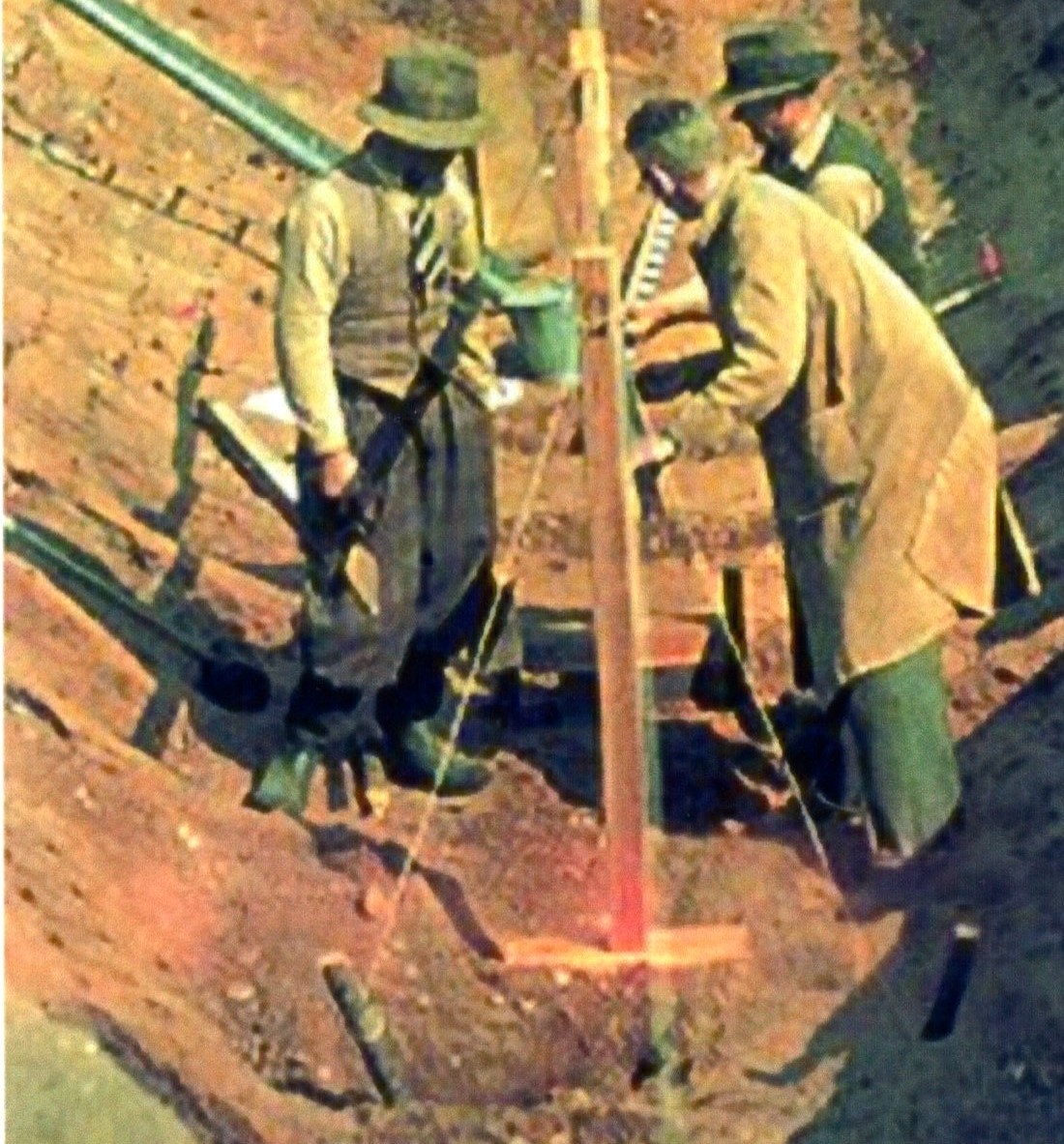 The description says that they were able to identify a 5° heel to port? (The heel was actually to starboard and he implies this later, so this is an error) and also the distortions of the keel. By scraping the sand away in the vicinity of each rib where it crossed the keel they found keel spikes which they were able to use to define the run of the keel and its relationship to stem and stern timbers.

The ribs were recorded as being 3 – 5ins wide and about 3 to 4ins in depth. Crosley says that the strakes were about 15ins wide. He guessed at possible construction methods for securing the gunwale, but it is clear that he was being influenced by the Nydam ship and other craft as he quotes several sources with which he seemed familiar. There are detailed dimensioned drawings of any metal fittings.

In later questioning, Crosley said that he was responsible for the drawings, which were based on measurements made from the port side of the craft. He thanked the director of the Science Museum for allowing him to undertake the survey and his colleagues Gillman and Jacobs for their assistance.