The Danish Nydam (pronounced Nudam) team have been particularly useful for the Woodbridge team.

They have been generous in every respect and willingly shared their expertise, advice and hospitality. 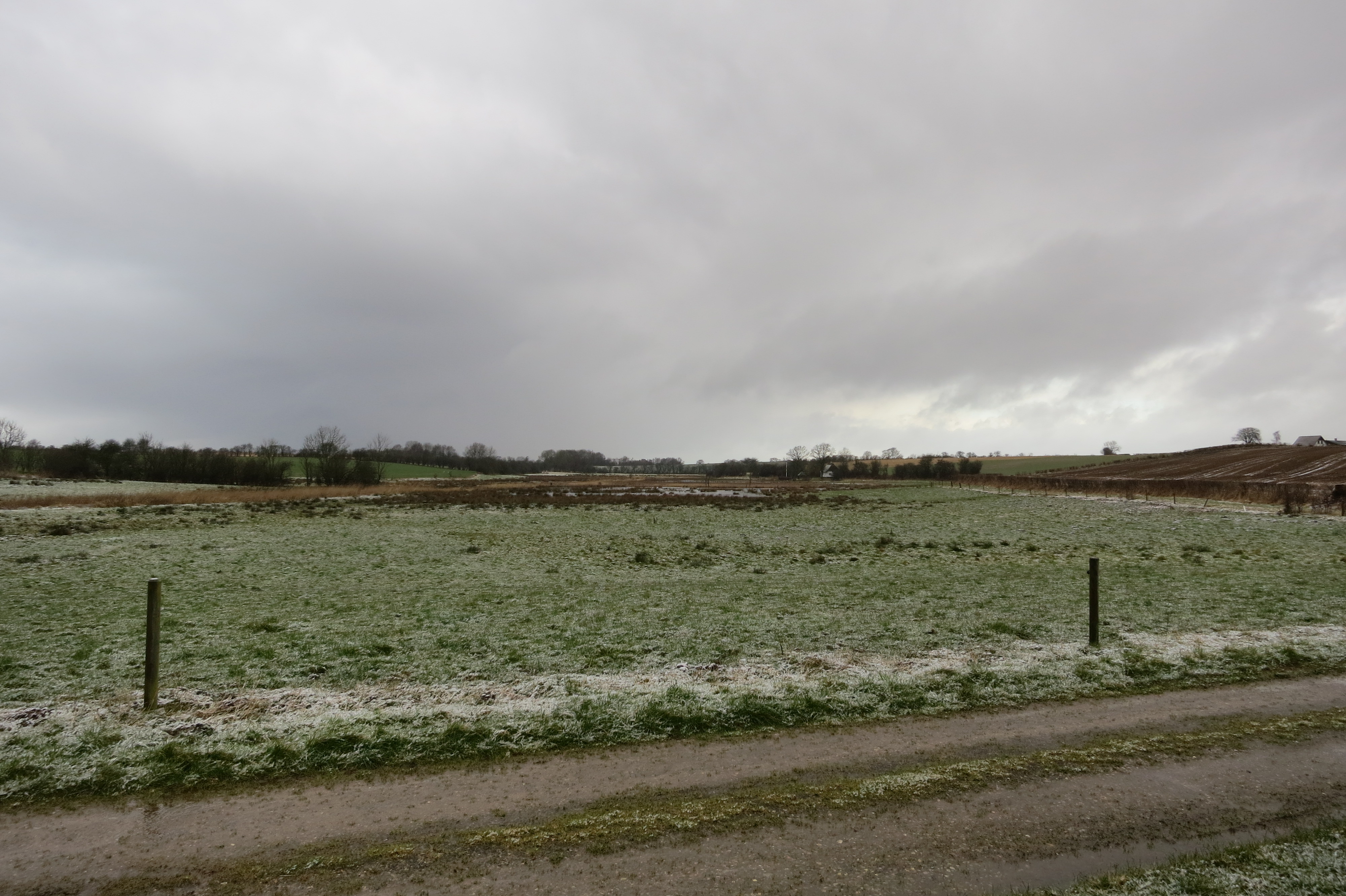 The basic story of their craft is that it was a trophy of war and was sunk in a shallow lake that gradually filled with sediment,preserving the ship. It was discovered in the late 1800s when Denmark was in dispute with Prussia about the border between their countries. The ship was virtually on the front line of the conflict and as Prussia prevailed, they kept the ship. The preserved planks could be assembled into the ship again. All the weapons and equipment of the ancient, vanquish crew of the ship were also thrown into the lake, so a great deal of information has been gathered from this particular find. The original ship is located in a museum in Schleswig-Holstein. In recent years the Danish team decided to replicate it and as it has many similarities to the British, Anglo-Saxon ship their experience of reconstructon is particularly useful.                                          The marsh as it appears today

The ship is a snug fit in the Naust. The ship's planks were initially prepared by using saws, but the final surface trimming and shaping was done by using axes, adzes and gouges. These tools have left a distinctive pattern on the timber that can be seen on the lower plank near to the bow. The ship has 5 planks a side. 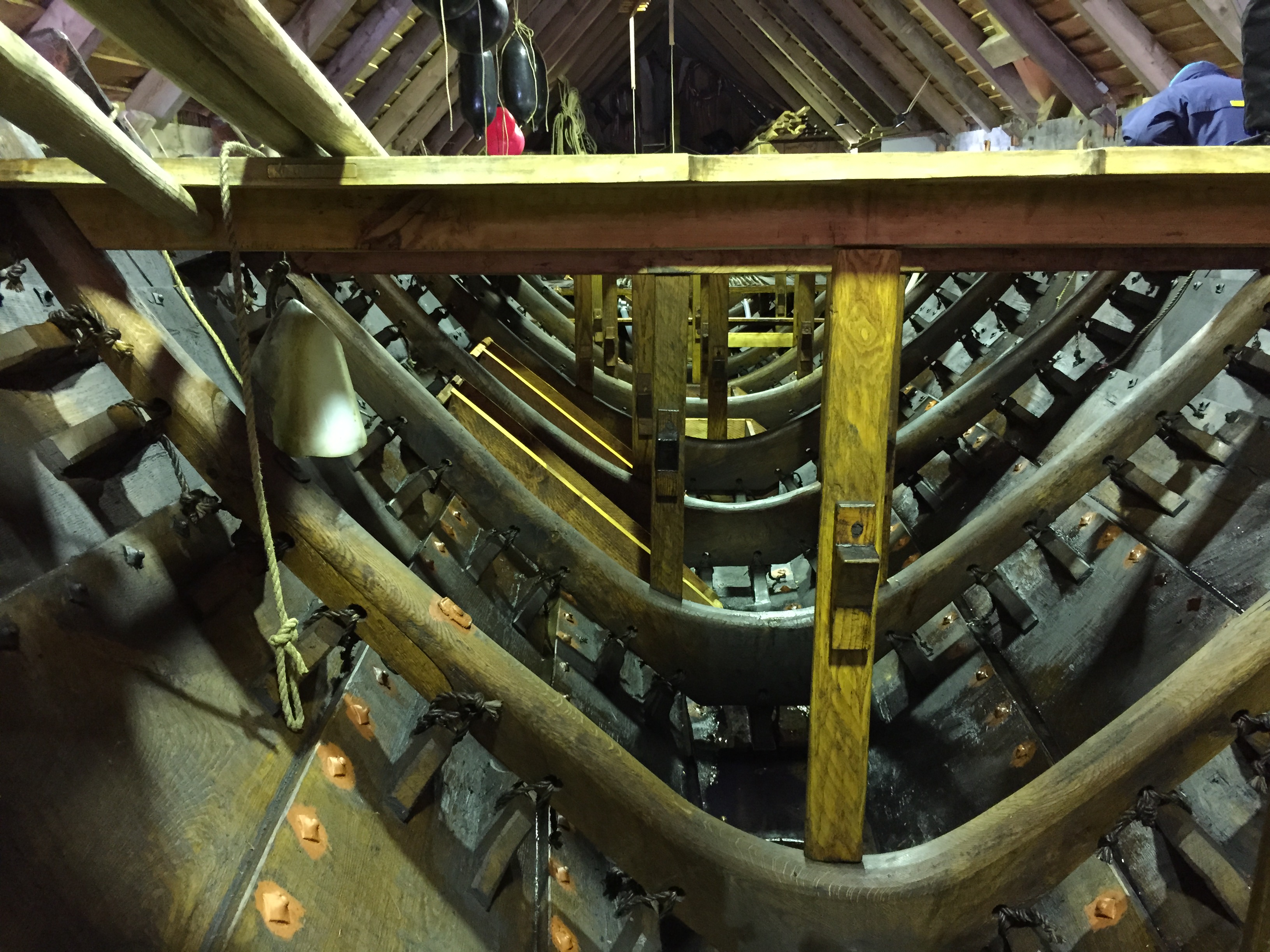 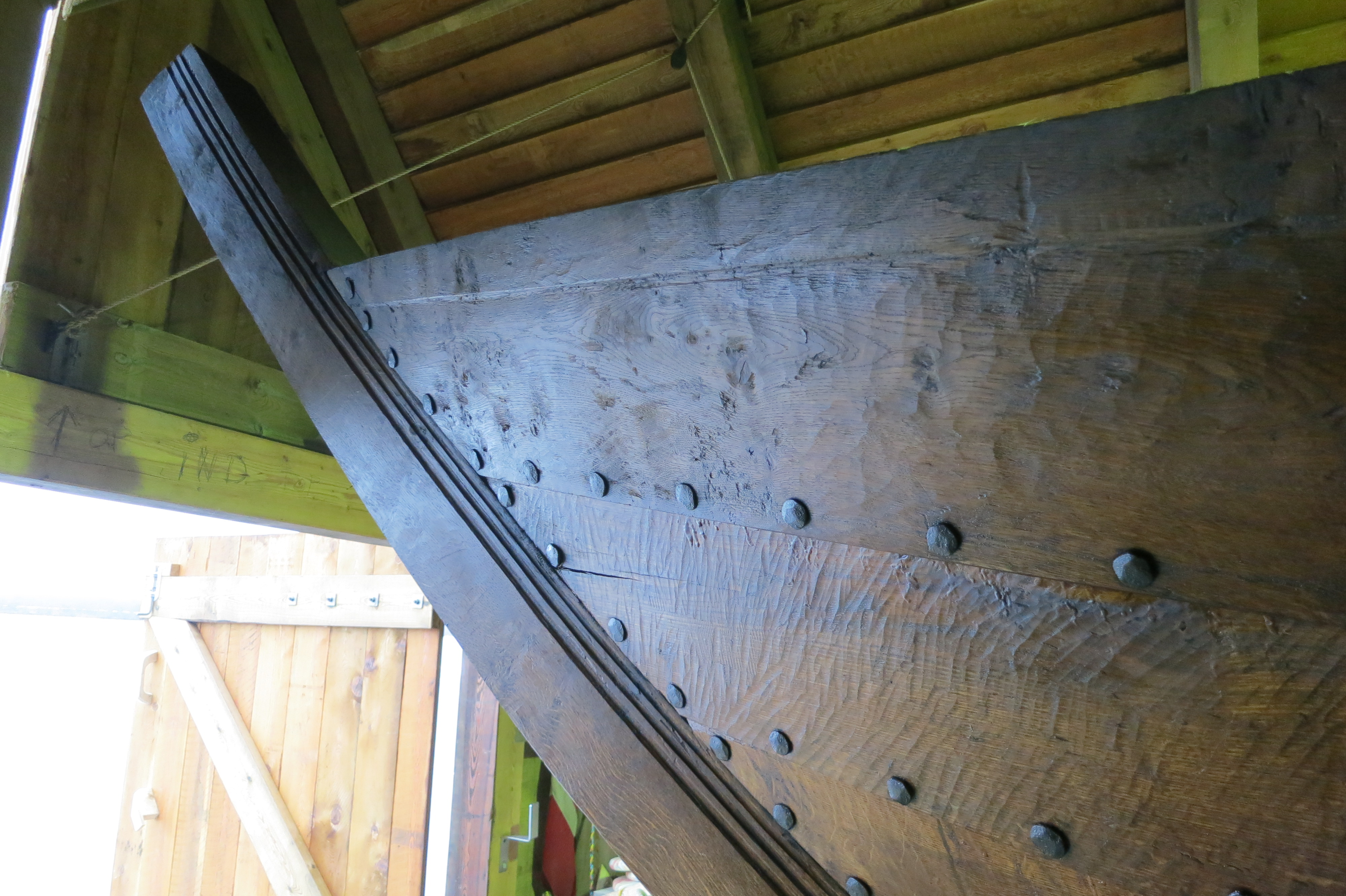 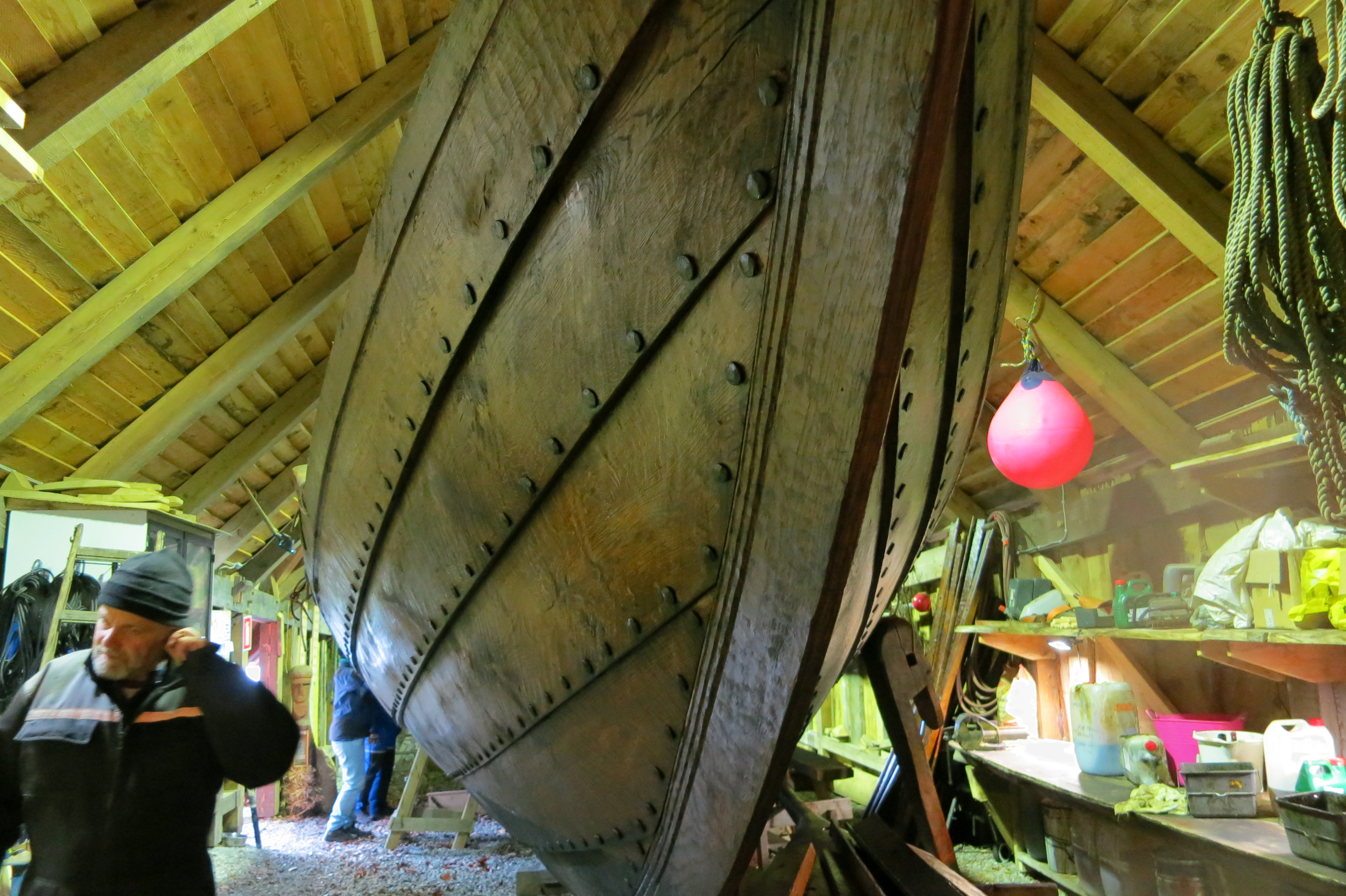 The construction of the Nydam ship is very Scandinavian and also very different from the Sutton Hoo ship. It will be seen that the planks have raised 'cleats' on the inside that have been shaped from the solid timber. The ribs have been 'grown', that is, they have been selected from timber that has grown to this shape. The ribs are tied to the plank cleats with lime-bast rope. The horizontal member is the thwart that pushes outwards on the tops of the ribs to resist the inward pressure of the water. The centre of the thwart is supported by a vertical member and about halfway up it, there is a support for the internal decking that has been removed for maintenance. The decking boards can be seen stored outside the naust beneath the projecting eaves in the upper picture. It will be seen that the Nydam ship is more 'V' shaped than the very rounded shape of the Sutton Hoo ship which was built 300 years later. The different shape would make the Sutton Hoo ship more stable. The shape of the Nydam ship has changed (see below).

People comment that this ship and the Sutton Hoo ship, do not look very deep, but the true depth only becomes apparent when the decking is removed as in the picture below. For the crew to row effectively the thwart that is used for seating, must be the correct depth below the gunwale (edge of the ship) where the tholes (rowlocks, oarlocks) are attached. The rowers must be able to plant their feet firmly on the decking to brace themselves. This determines an approximate position for that decking.

Speculation suggests that the space below the decking could be used to carry goods and equipment for the crew. It has also been suggested that animals with their feet tied together could be transported below the decking if required. The ship used a very clever system for decking that will be explained elsewhere on the website.

Investigating this operational ship brought home the fact that much other equipment is needed for its running. Fenders, bailers, buoyancy aids and securing warps are just the beginning of a lengthy list of additional requirements.

The actual ship is in the Landsmuseen, Schloss Gottorf in Schleswig-Holstein. It is in a wing slightly separate from the main museum building. There is much more information and many exhibits relating the the ship and other historical domestic activities. 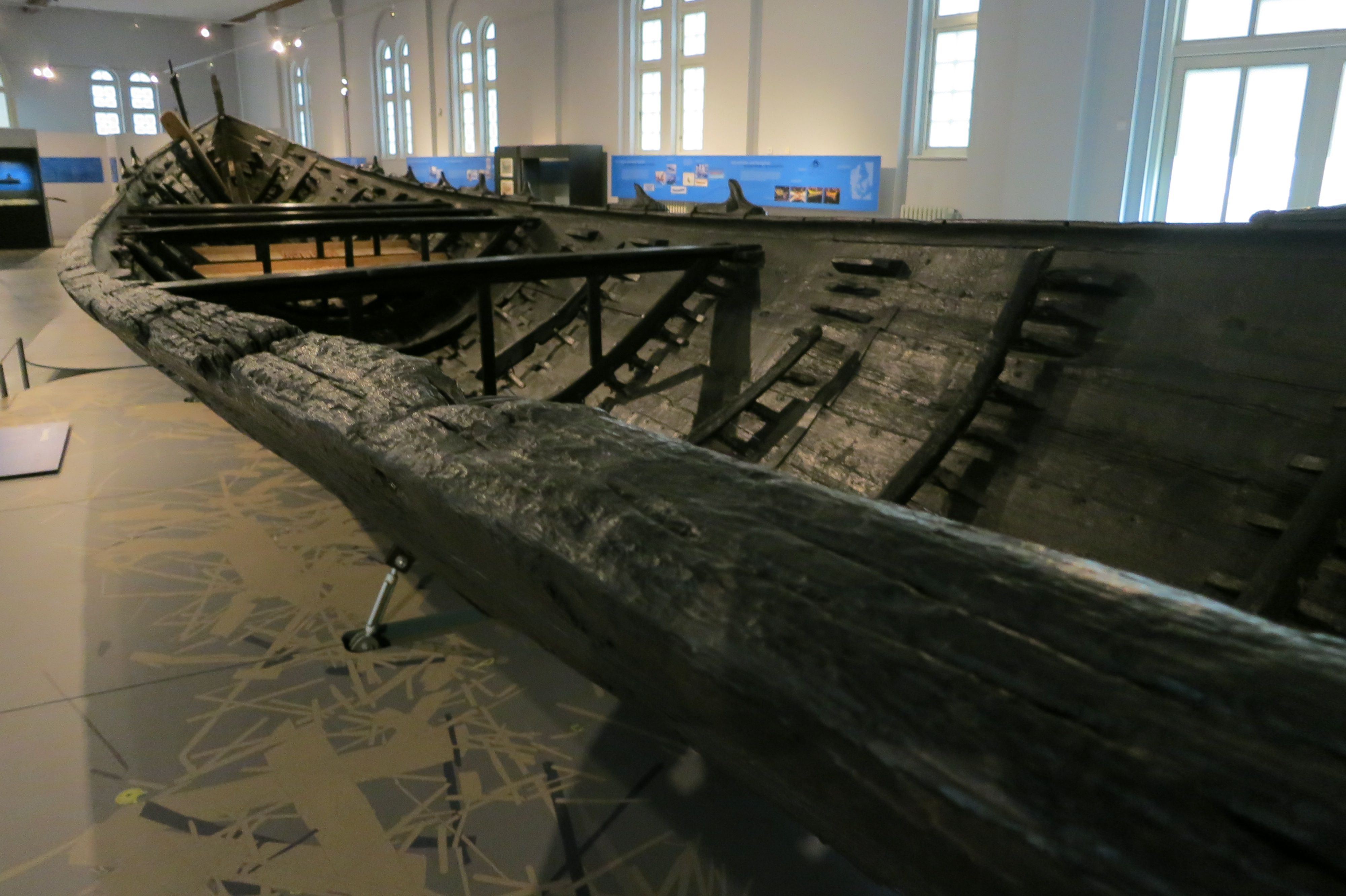 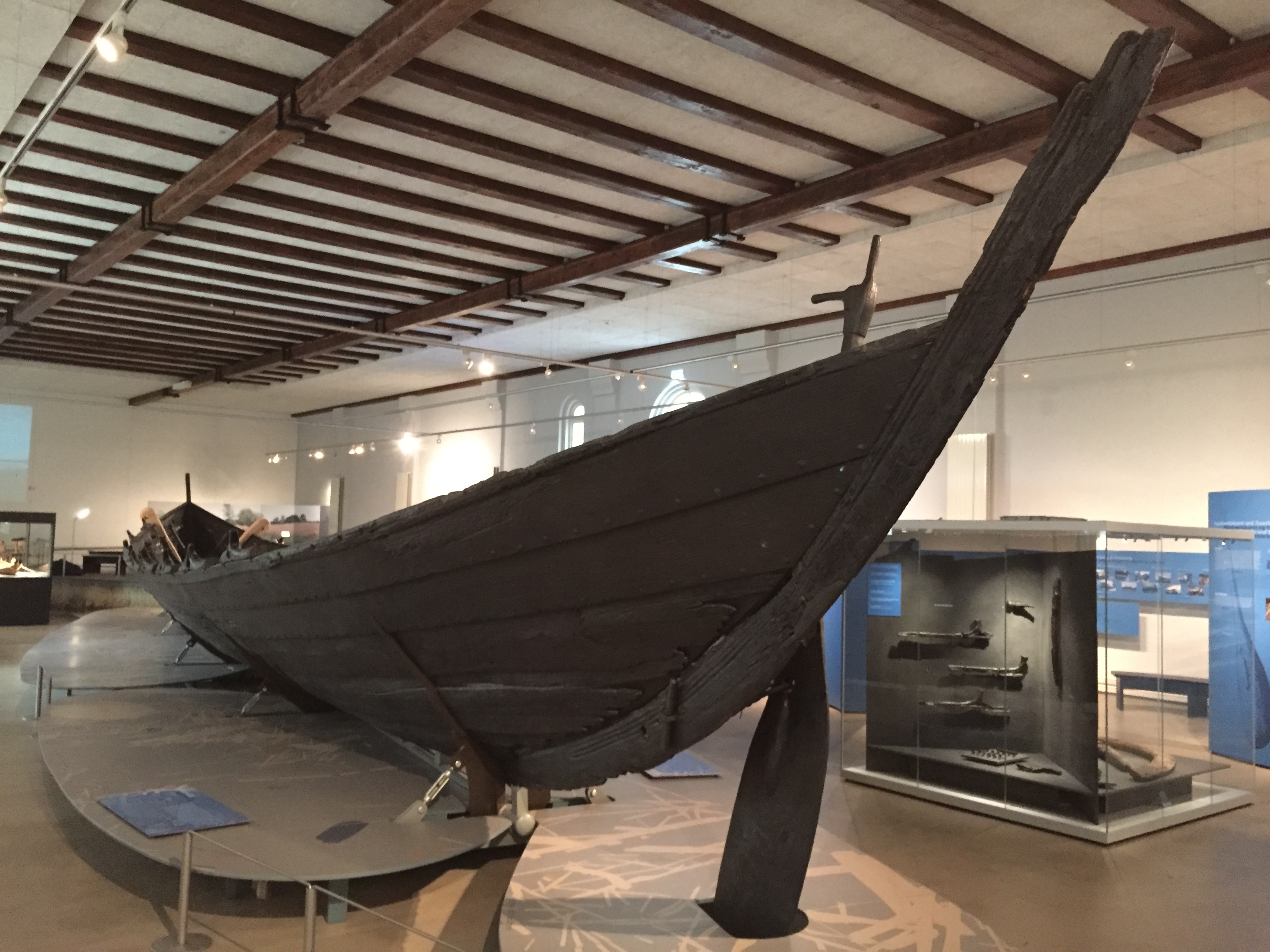 It is quite amazing that a ship which was sunk in about 325AD has been preserved in quite such a complete way, so that it could be reassembled. However, it is important to realise that even with the possession of its very timbers it has not been possible to find total agreement, over the years, about the true shape of the craft. A diagram in the guidebook shows that its form has been interpreted and re-interpreted in 1863, 1929, 1961 and 1995. The first interpretation made it quite rounded, whilst the last one made it more 'V' shaped. It will become important to appreciate this, with the Sutton Hoo ship, where no substantial timber survived and there will be various ideas about what shape it was, when it was first put in the ground.

As the Sutton Hoo ship had its interior removed at the time of the burial there is bound to be further speculation about the structures in the interior. It is highly likely that the Nydam ship's interior will play a large part in those deliberations. 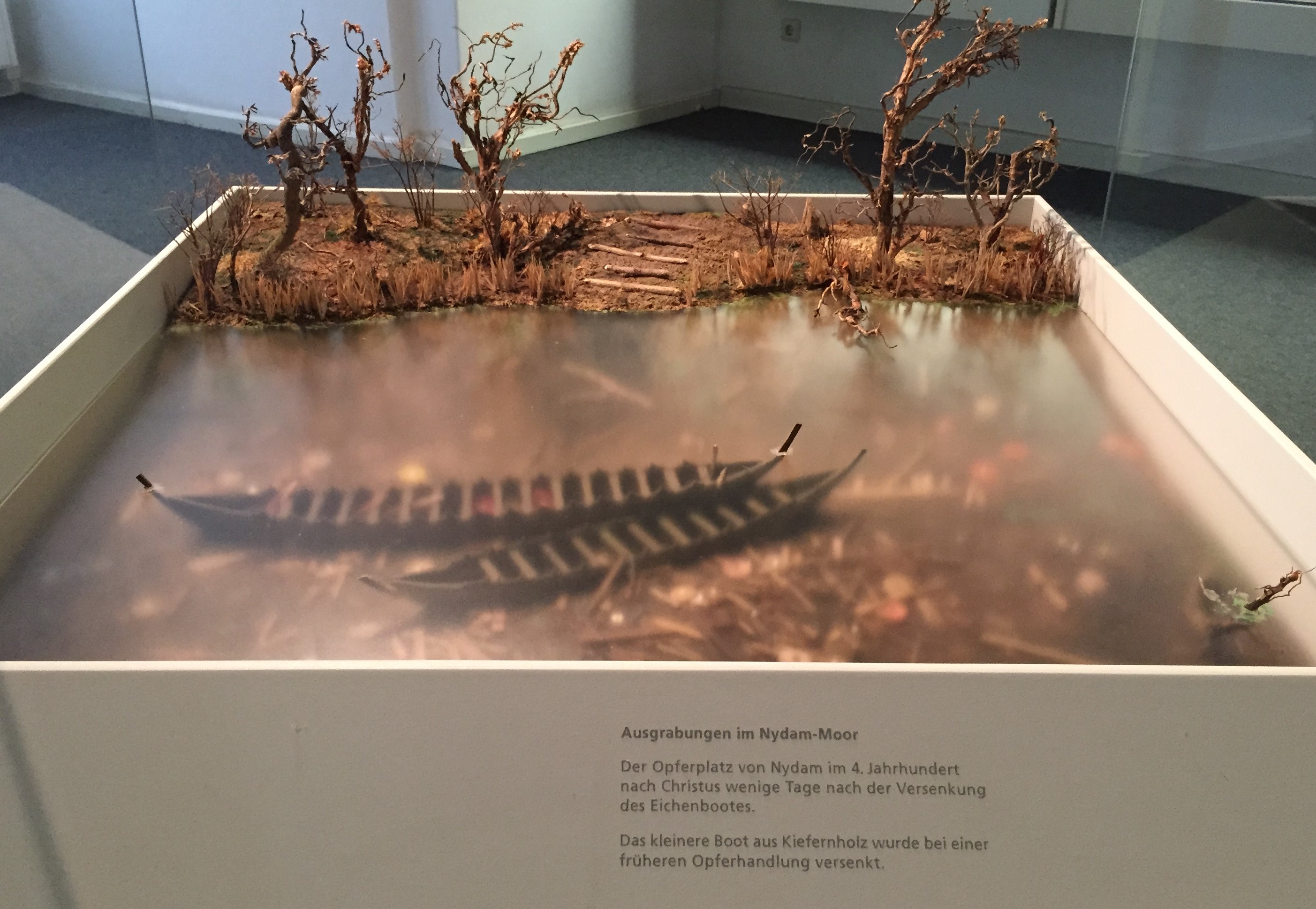 Two further displays were of special interest - both models.

On the left is the model of the sunken craft. A reminder that there were two. The one that this website concentrates on is the Oak ship, but there was also a smaller Pine ship. Some of the pine ship information has been valuable in reassembling the Oak ship. In particular the rudder of the pine ship has formed the pattern for elements missing from the Oak ship. It was of interest to see that the model sunken ship was represented as having its projecting ends clear of the water. There is speculation that the Sutton Hoo ship may have been buried with the extended prow and stern timbers above ground to convey the awsome dimensions of the king's ship under the mound.

On the right are scale models of the Danish, Hjortspring ship alongside the model of the Nydam Oak Ship. Hjortspring is a much lesser-known craft, but it is a fascinating boat and we were fortunate enough to visit the reconstruction which certainly deserves coverage on this website, as it is such an intriguing ship. To kindle interest - it dates from about 325BC - 600 years before the Nydam ship.