(A rapid telling of the tale.) 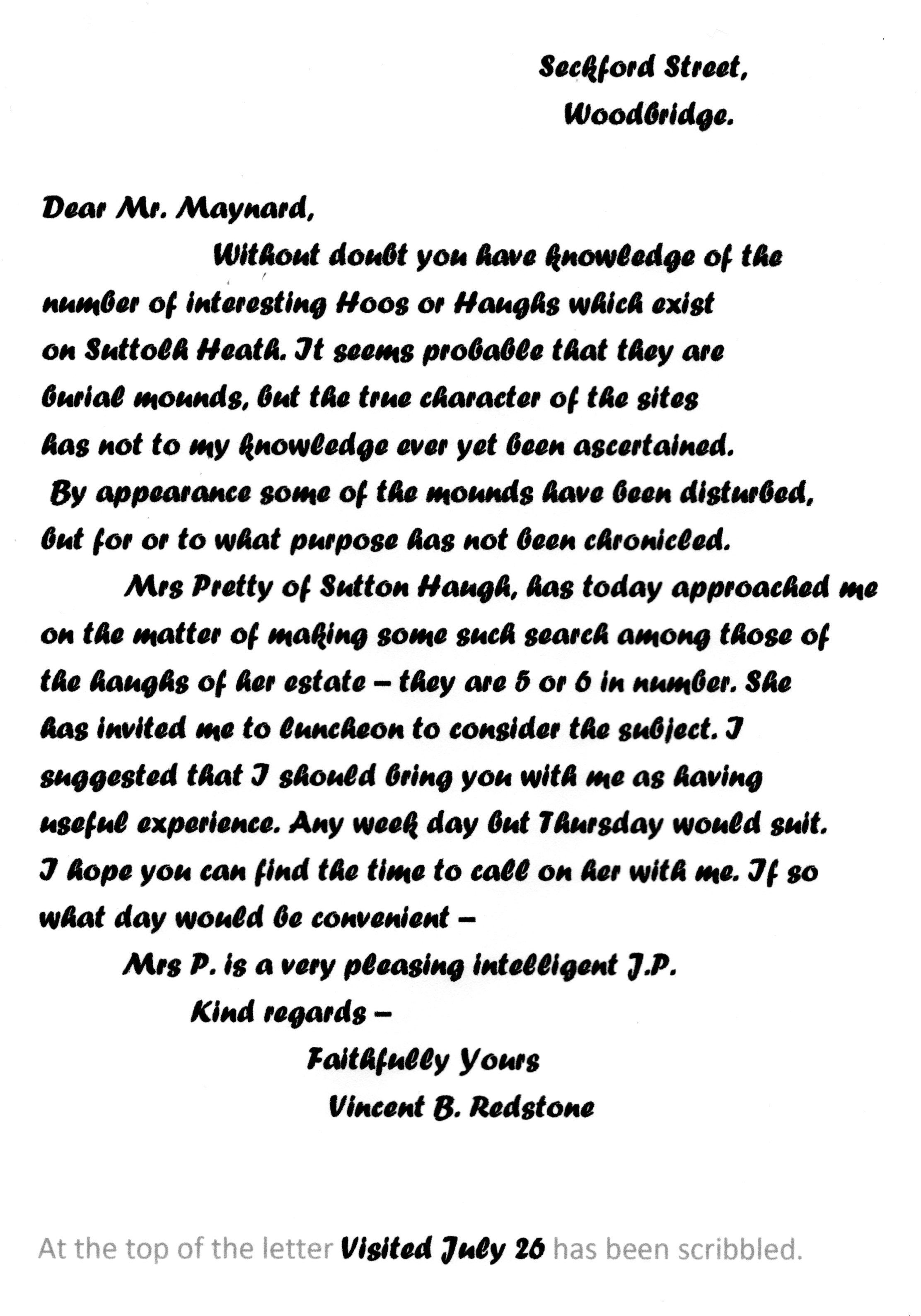 A Yorkshire lady called Mrs Pretty lived in a large house near Woodbridge. She bought it in 1926, then called Sutton House. It was changed in 1998 to Tranmer House in memory of Annie Tranmer who donated the house and estate to the National Trust. Mrs Pretty was a local magistrate and her father had done some archaeology work. The house overlooked a piece of land just beyond her garden which had numerous bumps and lumps on it. She was curious to know what might be below the bumps and in 1937 she happened to mention this to a local historian Vincent Redstone at the Woodbridge Flower Show. He invited (Copy left) the curator of the Ipswich Museum, Guy Maynard to join him for luncheon with Mrs Pretty.  Maynard recommended that she should employ a local man, Basil Brown to investigate. Mr Brown was mainly interested in the Roman period and had been responsible for discovering a Roman pottery kiln as well as a Roman villa. Working for Mrs Pretty he was paid thirty shillings a week (that's one pound ten shillings, or £1.50 today) and he stayed in the chauffeur's cottage. Basil was helped by two labourers Bert Fuller and Tom Sawyer (not the Tom Sawyer) and occasionally by Leslie Buckle. The mounds were different sizes so they started on the biggest one which became called Mound 1. After quite a bit of digging without finding anything significant they tried some work on a smaller mound (that became Mound 3) and following that, they moved to Mound 2. It was here that they found a piece of metal that Brown recognised as a ship's rivet. It was like a large bolt with a metal plate rusted onto one end. At the end of the summer the digging stopped, the mounds were restored and small objects that had been found were examined.

In May Mrs Pretty asked Basil to begin again on Mound 1. She was able to spare her gardener John Jacobs and her gamekeeper William Spooner. After 10 days of clearing the site Jacobs found a ship's rivet. Now this is the clever bit. Brown, from his experience the previous year, understood that this might mean that a boat of some kind could be part of the mound, so he very carefully scraped the soil away, until he found another rivet and then another. He knew that the rivets held the planks of the boat together, so the line of rivets he was following indicated that it really was a boat that was under the ground. In the next week or so he worked out a technique for finding the rivets, because each one left a pinkish stain in the sandy soil. As soon as he found a stain he knew that he had no need to dig below it, because he knew there would be a rivet there. He could leave a protective layer of soil over the rivets and the boat beneath. Word of what was happening began to circulate the archaeology world. June 6, Charles Phillips a fellow from Selwyn College, Cambridge, paid a visit and then, amazed at what he saw, he contacted the British Museum.

It was clear that more academically qualified people should be involved and on July 13, Phillips took over with a hastily assembled group of friends. They had a budget of £250 (compare this with Basil Brown's weekly wages) and stayed in the Bull Hotel in Woodbridge. On the 21 July the first 'jewellery' was found. Basil Brown had cleared most of the ship, but he had left the burial chamber alone for the experts to investigate. Over only 17 days, 263 objects were discovered and in subsequent years yet more came to light. Mrs Pretty paid 2 policemen to guard the site. The finds were sent off for safe keeping on 31 July. On 8 August a Science Museum team arrived under Commander Hutchison to carry out a full survey of the ship. He was assisted by two holidaying schoolmistresses Mercy Lack and Barbara Wagstaff who happened to be visiting from 8 - 25 August. They were keen photographers and took about 500 black and white pictures, 45 colour slides and a length of 8mm film. These pictures eventually became absolutely vital to understanding the ship, because the schematic plans drawn in September that year were destroyed during the war. Only two provisional plans survived. On 14 August it was officially decided that the goods found on the site belonged to Mrs Pretty. She gave the contents to the British Museum and although she was offered recognition in the Honours List, she declined. On 25 August the work ended. It can be seen that, apart from the ship, the essential finds were extracted in an excavation lasting much less that 2 months ... an impossibly short time ... because of what was happening elsewhere. The excavation was not methodically backfilled to protect it. An academic called Munro Chadwick from Clare College, Cambridge, identified the burial as probably being that of Raedwald. Major dating came from coins in a purse found in the burial.

3 September. War was declared in this country. The treasure was stored underground again, but this time in the Aldwich Underground station. Nobody had the time, nor could spare the effort that Basil Brown and his helpers had put in when digging out all the soil, to put it back.The piles of earth remained and the excavation was left exposed, covered only by a load of bracken laid into the depression in the ground. In 1942 the area was requisitioned for army training and was used for warfare practice. Spent bullets and cartridge cases littered everywhere. A grid of ditches crossed the site to deter enemy gliders from landing. Slit trenches were dug and tanks were used. Lieutenant Ted Wright heard of the damage being wrought and was able to stop it. In 1942 Mrs Pretty died and the house was sold. In 1945 the war ended.

In 1945 an assistant keeper in the British Museum's department of Early Medieval Antiquities was put in charge of the Sutton Hoo material. He was Rupert Bruce-Mitford. All the many objects and the vast amount of information needed organising and investigating, then recording by him and his team, in a manner that made them accessible to everyone. This was almost a life's work and the resulting publication of four volumes simply called The Sutton Hoo Ship Burial was a magnificent achievement of detail and explanation.

The ship site was never backfilled and a British Museum team headed by Rupert Bruce-Mitford returned to Sutton Hoo in 1961. Now they had the time and they erected a shelter to protect the ship and carefully removed the accumulated rubbish. A detailed plan was drawn and a full-size, glassfibre moulding made of the ship depression. It showed the war damage. All the findings of this investigation contributed to The Sutton Hoo Ship Burial publications.

This passage of time produced many changes of understandings in the archaeological world and it was eventually decided to revisit the whole East Anglian area to discover much more about the social organisation and territorial control of the Anglo-Saxon people. This evaluation phase and subsequent phases of research work were inspired and undertaken by Professor Martin Carver. Answers were sought about the international connections with the region as well as the domestic lives of the people concerned. Following this gathering of information, further excavations were undertaken at Sutton Hoo. The importance of getting all the knowledge available from the site was highlighted in 1982 when grave robbers attempted to access Mound 2.

Operations began with a careful excavation of Mound 2. This was originally superficially investigated by Basil Brown in 1938 when he discovered the first rivet that told him that the mound potentially contained a ship. This ship had been placed above the burial chamber and it was 20m (65ft) long. The whole site was subjected to a very detailed, almost forensic investigation using many different methods including aerial survey, stripping off the soils from large areas, using low lighting in dark conditions to emphasise ground fluctuations and what the Time Team televison programmes, more recently, popularised as 'geo-fizz', that is, ground penetrating radar.The last mounds to be examined were 15, 17, and 18.

Basil Brown died in Rickinghall village where he lived, in 1977. He was 89. The work that he did and the care that he took, is now greatly respected. 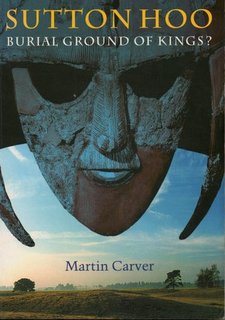 The early story of Mrs Pretty and Basil Brown's discovery in 1939 is now well known, but newcomers, upon hearing it, still wonder if there is more to be found. The events in this very sketchy outline, show that the site has actually been vigorously examined over many years. There isn't the smallest splinter of a ship left in mound 1 or anywhere else on site. No treasure remains. Mounds have been rebuilt so that visitors can appreciate what the site might have once looked like and it is a scheduled site. The whole area around Sutton Hoo was in use right back to the Bronze age (2000 BC) and probably earlier. Roman fragments have been unearthed. After the Anglo-Saxon era there were executions there, so that the graves of those killed intersperse the scattered mounds. Carbon dating brings the possible dates of these graves to the beginning of the England that we know today, the England that we think of as beginning in 1066. The historic story has been told and it can be explored in detail.

Most of the information here and much, much more is extracted from Martin Carver's book, Sutton Hoo - Burial Ground of Kings?  The book was updated in 2017 and is called The Sutton Hoo Story - Encounters with Early England. A similar authorative book is Angela Care-Evans' The Sutton Hoo Ship Burial. Angela worked with Rupert Bruce-Mitford's British Museum team and edited the definitive written record of the ship in Volume 1 that is being used for the fundamental information to build the full-size craft in Woodbridge.

To understand the size of the Sutton Hoo ship click and hold on Ship at the top of the page then open How Big?.

In early 2021 a film called 'The Dig' was first shown on Netflix. It has been extremely popular and made many people all over the world aware of its subject - the finding and excavation of the Mound 1, Sutton Hoo ship. Visitors frequently ask about the accuracy of the events as portrayed in the film. To respond to the most frquently asked questions, go to Digging Deeper (top of the page) and find The Dig. Netflix..