After the Romans went home about 400AD the amount of written records fell to a tiny trickle. Any empire is held together by its communication systems and the Romans used their good roads for fast travel and their writing in Latin to send messages. We know that foreign visitors living along Hadrian’s Wall could send and receive postcards to and from friends and relatives all over the empire, because we still have some of them and we can read them. When all this social chatter ended, most people stayed in their own neighbourhood, speaking their own language and hardly using spoken Latin. They didn’t bother with Latin writing, but they continued to talk to each other a lot. This doesn’t help us, because we don’t know what they were saying, thinking or doing, so we can only guess. 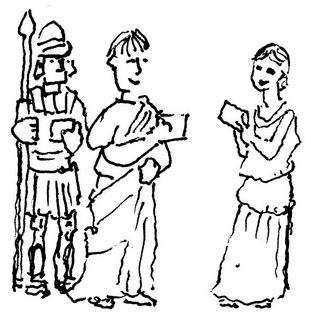 The Roman habit of writing had not completely died out. The Christian or Catholic Church continued to use writing to communicate with its outposts and as it was based in Rome they still used Latin for their letters and they called themselves the Roman church. (Roman-Catholic church) The Roman Empire mainly allowed freedom of religion. In the early days they had a number of Gods and Jesus hadn’t even been born; later though, we know that they began to encourage Christianity. When overseas people came into this country after the Romans had left they were not Christians, but Pagans and we are not quite certain of all of their beliefs, because they didn’t write them all down for us. They had a range of Gods such as Woden and Thor and we still mention them in our days of the week:

It wasn’t until some Christian, Latin writers re-established themselves in Britain that we gradually began to find out more about what was happening, because, as with the Roman postcards, we still have some of their writings and we can read all about it, for ourselves.

You can find out more about the Roman postcards found at Vindolanda on Hadrian's Wall by putting vindoland tablets into a search engine and then looking at what the BBC or the British Museum have to say. If you want to study the tablets find them on vindolanda.csad.ox.ac.uk.

Probably the man that we should thank the most was called Bede and he lived in the North East, in lands north of the Humber river that we still call North-Humber-land (Northumberland). Bede lived mainly in Jarrow. He was born in 673 and joined a monastery when he was 7. The dates are very important to us, because he lived within 50 years of the burial at Sutton Hoo. Another account, called the Anglo-Saxon Chronicles was begun in 890 for King Alfred the Great, so it was being written nearly 300 years after the event. The people who wrote it were also reading Bede and copying from him.

As a monk Bede did lots of writing and teaching and he died in 735 aged 62. From researching in his library and by speaking to other people he 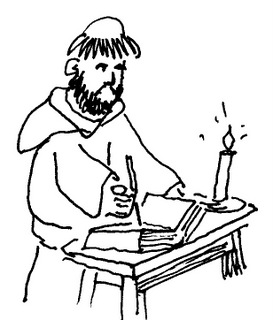 gathered information about how the Christian religion had found its way back into Britain after the Romans had gone home and he wrote this story as a History. To explain things he sometimes had to mention the geography, or the events and political changes in different areas and so by reading his account we finally get to find out what had been happening in many parts of the country in what we have been calling The Dark Ages. For us to prove that everything he wrote about is true is very difficult, but where we can discover snippets of information it would seem that, in general, what he tells us is reasonably accurate. In one respect we have to be cautious. He was very much on the side of the Christians and of course the Pagans were the real ‘baddies’ in the story, as far as he was concerned, so he doesn’t have much that is good to say about them.

In Bede’s days there was very little understanding of medical conditions. Death from plague or illness was much more commonplace than it is today. Bede writes quite a lot about miracle cures and how believing in the message of Christ might save you. He also mentions that it will increase your chances of winning in battles if you have the right God on your side, or how you might end a drought by turning to Christianity. His beliefs might not exactly line up with our understandings today. He includes quite a lot of what we call ‘magic’. You can read Bede's book Eccesiastical History of the English People (Penguin Classics) but remember it's mainly about religious people and what they said and believed and the amount of 'history' is rather restricted.

The visitor’s centre for Bede can be viewed on: www.bedesworld.co.uk