The story of the rudder is complex. Basically, it is to be fixed close to the stern of the ship on the Steerboard/ Steuerbord – side, that became known as the Starboard side, as a result of this name. To understand what follows, in depth, you should first read Digging Deeper – Great Rudder Mystery this website.

Having explored the many problems associated with the rudder, in the above article, it was still imperative to settle on a probable design. The only real guidance came from the Nydam Pine ship rudder (see picture, Rudder Mystery) as this had been the starting point for the actual Nydam Oak ship's rudder, whose original rudder was so badly damaged that it could not be used. The reconstructed one in Schleswig-Holstein attached to the actual craft had also been evolved from the Pine rudder, but clearly it was not rigged in a functioning manner; it was illustrative. If the findings of the Sutton ship excavation were to be recognised, the system to be used should probably not use a boss/button, as seen on most Scandinavian craft, or be secured by piercing holes through the hull.

So, what did the builders of the modern reproduction Nydam Tvei use on their fully operational craft? The answer, thanks to our good friend Ole Brixen-Sondergaard was that whilst they used the Nydam rudder form they also used the basic pattern of the rudder-support system from the Vorså wreck. This was a rudder recovered in the Kattegat in 1958 near to the town of Vorså on the north-eastern corner of Jutland. It was given to a museum in Frederikshaven. Referring to it as a (steering) oar, the almost legendary Scandinavian boat expert, Ole Crumlin-Pedersen, described it in this way:

‘The oar is of oak, very slender and well-formed. The blade measures 1.92 metres, and the total length is 2.80 metres. The width of the blade increases from 0.175 m. at the top to 0.375 m. at the bottom, where the aft edge forms a little "heel", while its thickness decreases from 10 cms. to 1.5 cms. The sections show that the oar blade is asymmetrically formed, the side towards the ship being almost flat while the other side is curved to a greater or less degree. The fore edge is sharp, while the aft edge is fairly square-cut. At the top there are two oval holes for attachment of the rudder bar, and at the thickest point there is a hole of 4.7 cms. diameter for the withe in which the steering oar was hung.’ 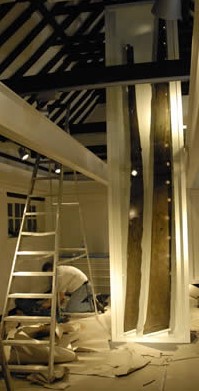 ‘Various modes of suspension have been proposed to explain the many holes and marks of wear on this oar. In the case of the Vorså oar the two holes for the rudder bar are explained by the fact that the oar could be used in two positions, almost vertical during deep-water sailing, or, for shallow-water sailing, turned around the withe into an oblique position where the lower edge of the oar came level with the keel. This feature suggests that the oar belonged to a merchant ship which could only with difficulty be manoevred by means of oars alone. The asymmetrical section resulted in the oar lying close in to the ship, so that wear on the withe in which it hung would be minimal.’

The steering oar was thought to be Norwegian in origin and dated 9 – 12C. Viking ships used withies instead of rope to control the movement of the steering oar due to flexibility and durability, Hence his reference to ‘withe’. This oar is later than the Anglo-Saxon period of the Sutton Hoo ship and backdating knowledge is rather unsafe, but the system used to suspend this oar covers the design requirements, so it is difficult to ignore it. Crumlin-Pedersen suggests that the length of the oar at 2.8m (just over 9ft) makes it more suited to a merchant ship, which is quite likely. Side-steering oars of this type were in use from centuries BC, (eg. Kyrenia ship about 300BC) right up to the medieval era. Steering oars discovered along England’s east coast in the Southwold Museum, carbon date from 850 – 950AD are over 4m (more than 13ft) tall and claimed to be the longest ‘Viking’ rudders ever found. 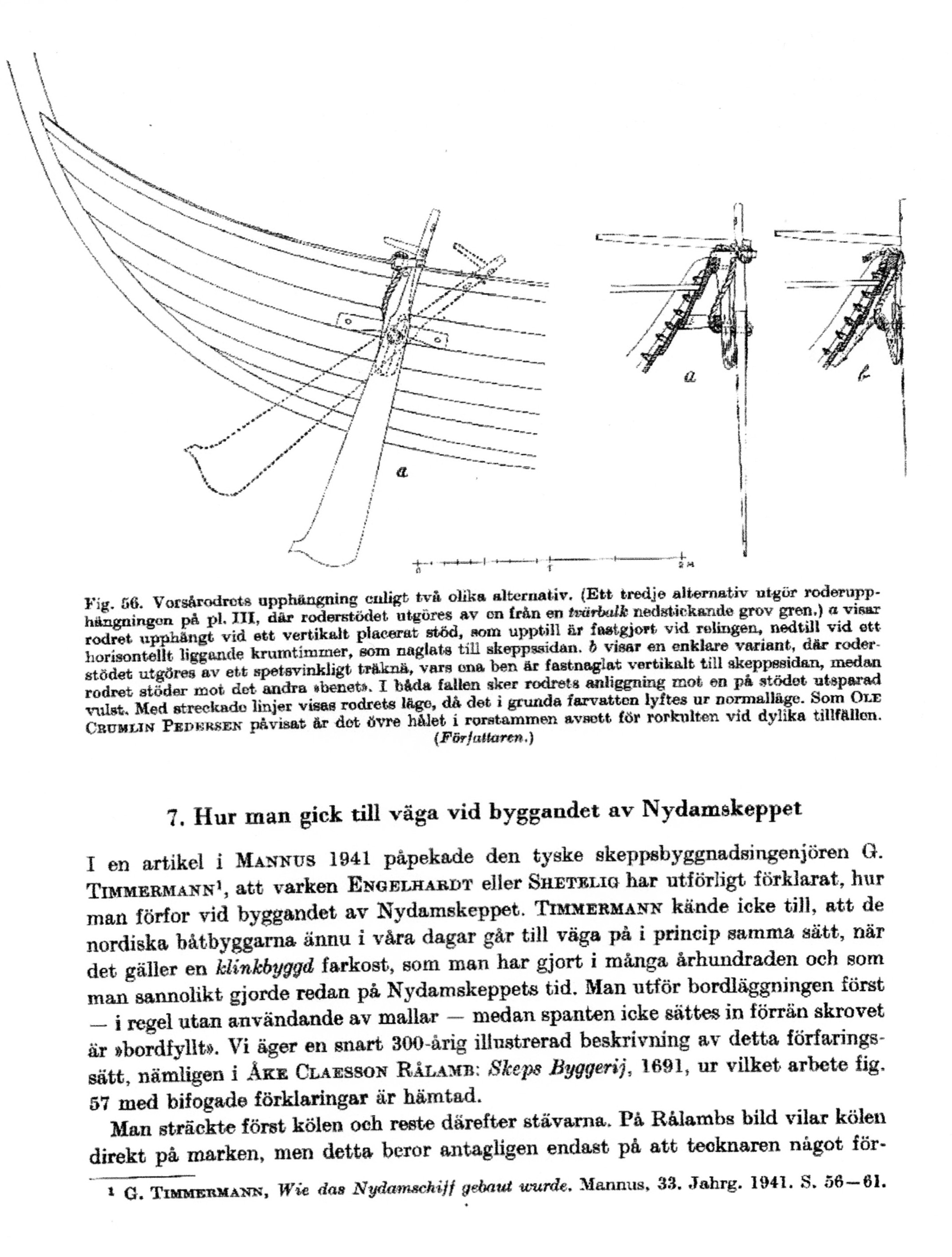 The basic illustrations usually referred to when describing this Vorså  system are attributed to Harald Akerman published 1941. Just the drawings are reproduced in Volume 1, page 411, but can easily be missed. On the original page they appear to be most unpromising, but closer examination shows that diagram b) supports the rudder without piercing the side of the ship in the usual manner.

These are some of the salient points to bear in mind when looking at the drawings: 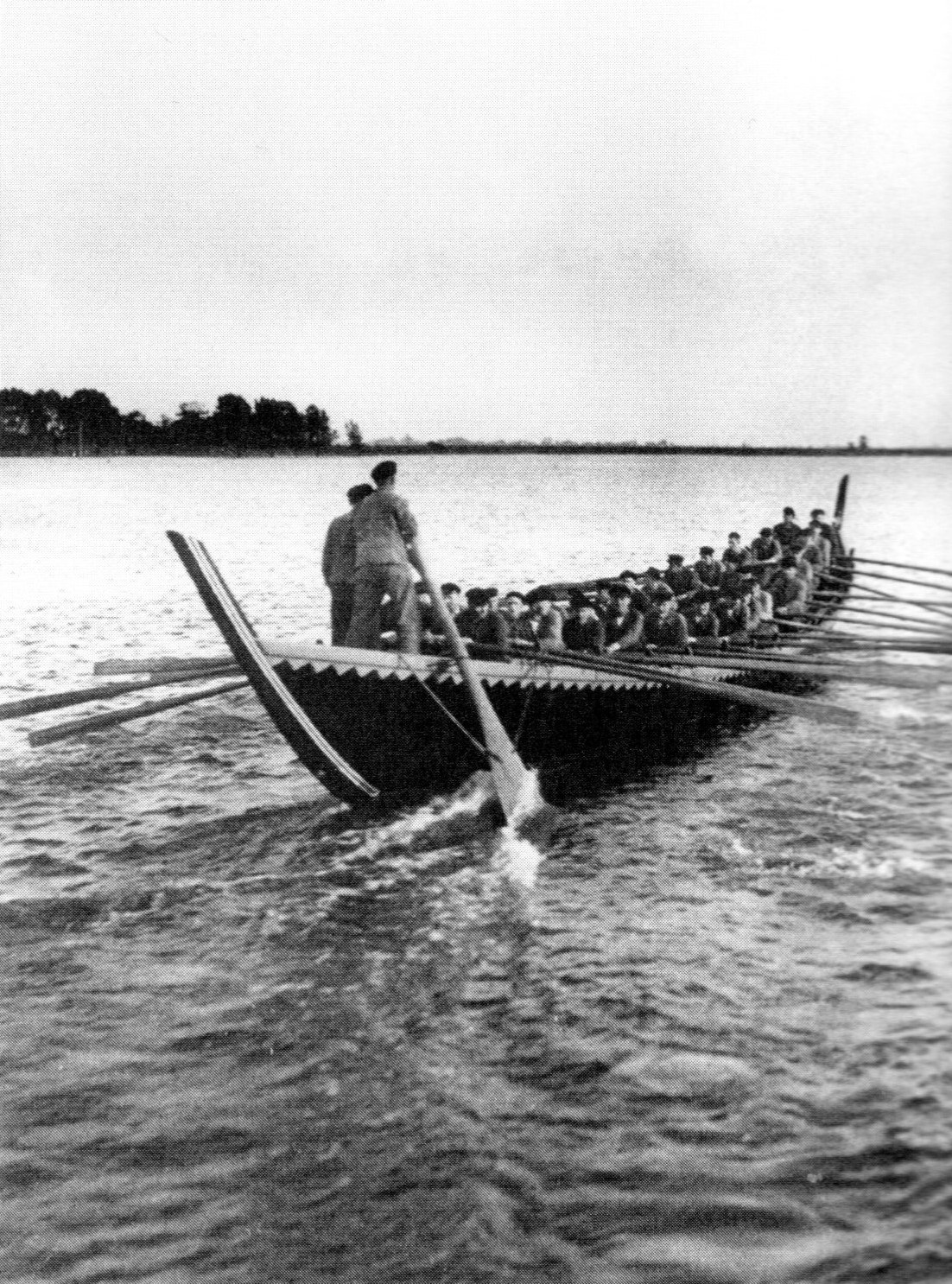 One great advantage of this system is that it can take account of the angle of the ship’s side when viewed from above. A rudder should align with the keel, straight forwards, when in its ‘neutral’ position. If it is turned to left or right the disturbed water flow will steer the ship to one side or another. A rudder pressing directly against a rubbing rail on the ship’s side would take the angle of that rail. If the rail was not wedge shaped to be wider at the back, but was just a flat rail along the ship’s planking, pressing the steering oar flat against the starboard-side rail, would mean it would be steering to the left (Port). This situation is shown in Das Nydambåden, page 30. The boss system allowed universal movement to allow for this effect.

It is of great interest to see that the description of the blade of the steering oar indicates that it was hydrodynamically shaped in cross-section, to provide lift away from the ship’s side (see Digging Deeper). This would mean that the top section would be naturally inclined to press inwards towards the helmsperson and against the ship’s side. This movement can be seen in a photograph of Honour of Steding a German reproduction of the Nydam ship built in 1934 by Abeking & Rasmussen, on page 74.

The holes and the vertical strip on the inside of the Nydam rudder may well have been attempts to control the inward rudder movement that could potentially have thrown the helmsperson overboard had not the top section been firmly secured inboard.

Picture of rudder lift away from the ship & control rope, from Das Nydambåden 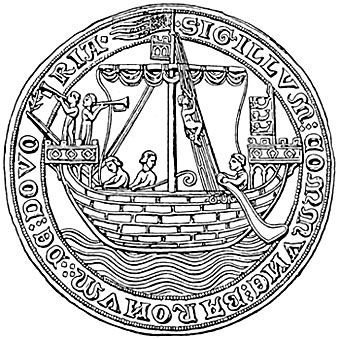 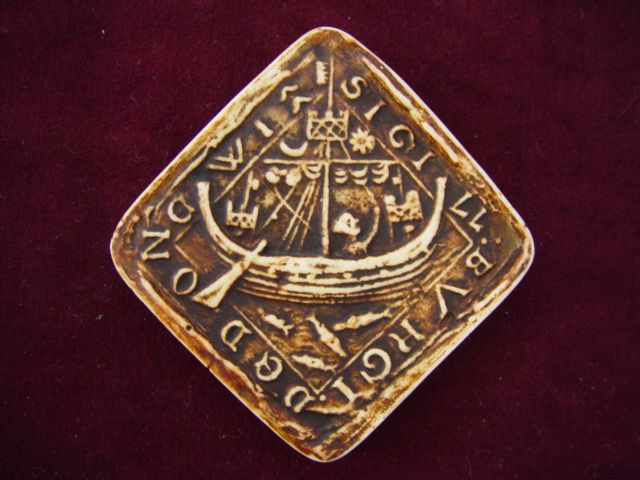 Illustrating the side rudder being used on later,

appears to be on the port side,

but this is the ‘negative’.

When used,the image will be reversed.

The Dunwich seal has already been stamped.