In the section Computers? (Investigation 4 this website), the following points were made:

where the original information comes from

what process was used

In Investigation 6 the outline of Paul Handley's approach to finding the shape of the ship was covered - so what were some of the calculations made? What were the numbers that might have produced his solution? It will be seen that changing the numbers at almost any stage will produce a different outcome at the end. This is the nature of the whole task of trying to define the precise form of the ship. It is not a simple task. It is not without variations. It is a task that will provide different solutions at the end of the process every time that a different person undertakes it.

In the final analysis it will come down to: Who undertook the process? What is that person's experience - that person's skills, for the judgements that they have made will be based on their experience, rather than on mathematical certainty. 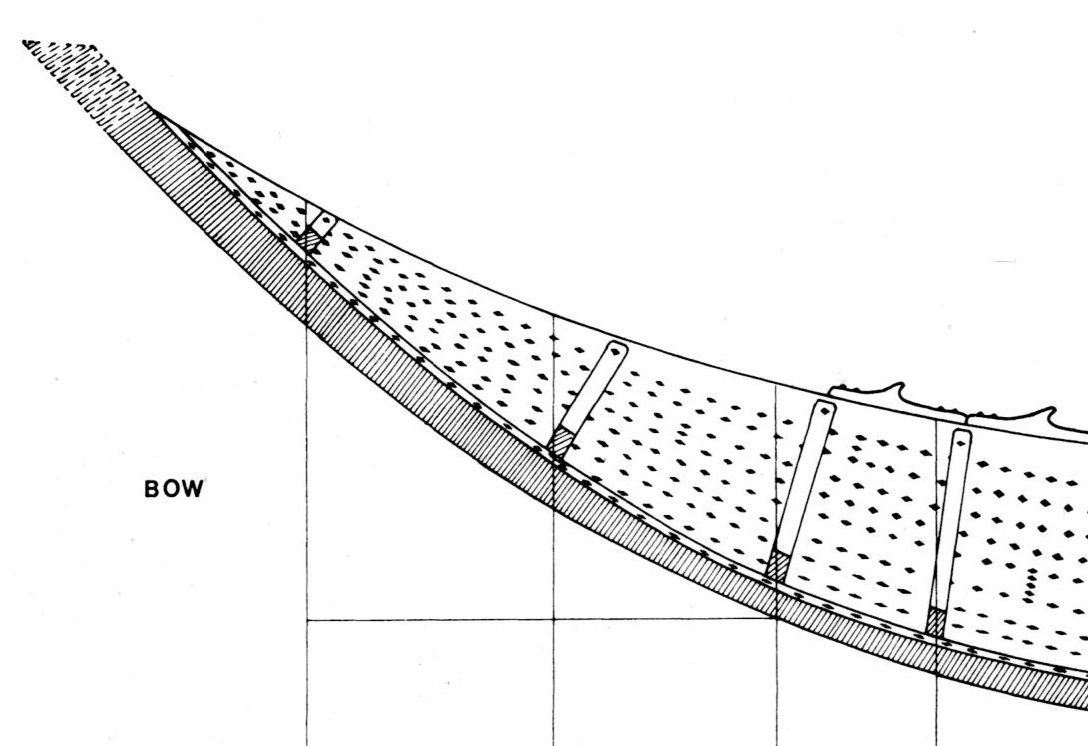 In investigation 6 the several drawings that previously described the ship had to be amalgamated and information drawn from them to produce drawings of the shape of the ship. In order to make meaningful calculations about the ship it was necessary to have a number of basic dimensions, weights and areas. A straightforward example of this might be illustrated by the seemingly innocent question - How long was the ship? Originally it had extended ends that rotted away. So, how long were they? (They are always shaded) Is the ship’s length measured to the point where the gunwales come together, or is it the overall length including the extended pieces? A judgement, or an estimate, has to be made. This is a very small decision, but it will have a knock-on effect as the design develops. It is important throughout to know what decisions were made and what was the basis of the choices. It is thought that the original ship was built using what we now might call 'imperial' sizes, which will be explained later, but here the dimensions will be a mixture of imperial and metric.

Length was taken from the Mudie drawings. The body of the hull is shorter than 90ft, but the extended stem/stern/cutwaters are angled outwards. If they resembled those on the Nydam ship they would bring the length to about 90ft.

To make some approximate calculations of the provisional hull form it is necessary to make broad decisions about the materials and construction using some further information that the computer can supply quite rapidly.

As computers prefer metric figures, these were some of the figures used:

Crew weight depends upon how many crew, either 40 or 28.

Tholes are usually illustrated as solid if they were found, but as dotted lines if they are conjecture. They relate to the location of ribs.

These two numbers result from the number of tholes (rowing positions) discovered. 28 were actually found, but if the craft had rowers on each practically available rowing seat, the ship could have had 40 rowers, i.e. 20 on each side. The numbers are debatable, but if we are looking to understand the maximum capacity and capability of the ship, then calculating for the fullest crew would seem to be the safest assumption.

For initial rough calculation use 40.

These variables could produce up to about 6 tons depending on requirements.

The waterline beam of 3.5m & length 17.5m. Displacement of 15.9 tons. The waterline is at about 2ft and the freeboard is similarly another 2ft amidships.

Using the figures above, but initially unballasted, it is possible to look at the performance of the hull in various ways and ask various questions to see what might happen according to circumstances.

Centre of gravity can be moved up and down by loading and unloading ballast. (A total weight of 50 tons was mentioned in the Ipswich Museum commentary, but loading 37 tons (plus a 13 tons boat weight) brought the gunwale to water level.)

Removing crew numbers to the 28 tholes found on the ship and using the lightest 7 tons total made the ship very swift under oars as it reduced the width of the waterline/wetted surface. This might be thought of as the ‘attack’ mode. It could have loaded extra warriors aboard in this condition, for swift delivery on flat water. The naval architect thought that using ballast would be contradictory on such a light craft. Every effort had been made to build the ship as lightweight as possible, going to the extreme of plank thinness (which is actually less than 1inch), so why then load ballast aboard? The ship had sufficient stability as it was for normal operation.

Righting moment can be checked by moving numbers of people to one side, taking out the stores, or placing cargo on the gunwale. Testing its equilibrium and looking at its curve of areas it could be seen that it needed to heel 20° to bring the gunwale to down-flooding water level. It is thought that 10° of heel would be the comfortable maximum. The architect was of the opinion that sailing (using a mast and sail) would not be comfortable across the wind where there would be little reserve of freeboard and any sailing should be restricted to downwind. He thought that sailing was not the prime objective of the design.

Another separate term is prismatic coefficient which suggested that this craft was capable of reaching a displacement speed of around 9 – 10 knots for a hull of this length and the relatively low power available from rowing. The P.C. is not easy to understand, but it is roughly about the fatness or slenderness of the submerged part of the boat and whether that relates to the middle, or to the ends of the hull. The coefficient was towards the higher end of the scale.

A high prismatic means there is more displacement distributed toward the ends.  Since the fullness or fineness of the ends has a large effect on wave making resistance,

For any given speed-to-length ratio there is an ideal prismatic coefficient. As speed increases and the bow and stern waves rise, additional buoyancy in the ends becomes more favourable.

The question of hull rocker (the downward curving of the middle of the hull) was discussed. When 150mm of rocker was applied, the central one-third length section moved downwards and the ends were raised. The visible appearance was little changed. Waterline length was shortened by .5m. Righting moment was almost unchanged; the prismatic coefficient went down. This would make it better at lower speeds and probably a little more sea-kindly, but the all-out sprint speed would be harder to achieve. Initially, the architect thought that there was no great evidence for introducing rocker where none had been observed. He thought that building from a straight keel was traditionally a common practice, as it provided an easy datum to work from. Historically most keels would be straight. However, as the design work progressed it became more obvious from the evidence, that some rocker was required. Keel rocker is also mentioned in Investigation 3 this website. The final hull form has rocker as outlined in Investigation 6.

The hull was animated in waves of 1m height and 2m height.

In waves of 1m it could be seen that the freeboard remained almost uniform as the bow and stern lifted the hull to the wave form. At 2m the ship appeared to be taking some water aboard at the ends, which could have been deflected by temporary decking. The amount of the ship that was supported by water and its disposition could be seen when viewed from above. In 2m waves there was minimal support centrally, whilst the ends were heavily depressed into the water, generating maximum lift. The architect felt that a structural analysis to determine midship loading under these conditions might be worthwhile. He thought that when operating in the open sea it would be safest in flatter water conditions. 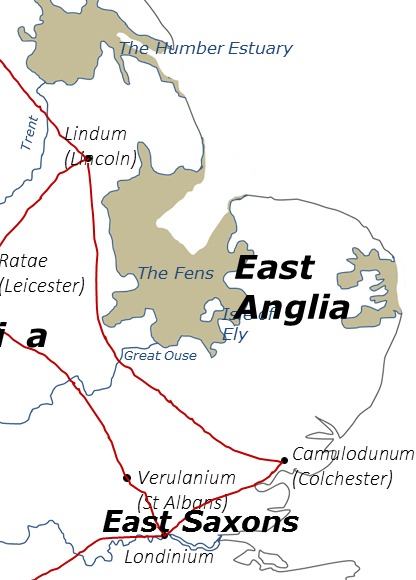 It is felt that the ship was primarily to transport Raedwald and his immediate cadre of supporters throughout those seas bordering the land he controlled. Whilst the borders cannot be precisely defined it might be reasonable to assume that they extended north to about the Humber and south to about the north bank of the Thames, although he may have wanted to cross to the Medway and the Swale when visiting Kent. Almost all of this area is accessible within 2 days journey. Much of it is within 1 day if tide and weather are carefully selected for a craft with the speed ability of this ship.

The whole sea area south of Walton-on-the-Naze called the Thames Estuary consists of narrow channels between sandbanks where the wave height is controlled and reduced by the shallow banks except in more extreme conditions. There are many shallow rivers within this area that give access far inland. The shores and river banks at that time would not have been as well defined as they are now and the ability to take the ship into shallow water would have been a primary requirement. The qualities of this ship would make it suitable for this sphere of operation.

It is unlikely that this ship was used for carrying cargo in open-sea crossings to the other side of the North Sea. This would require a more substantially constructed craft. There would be many of them, but to date none have yet been discovered.