Investigation articles attempt to fill in some of the background and answer some of the more frequently asked questions.

People ask: How do you start to build a full-size replica of the Sutton Hoo ship? Where does the information come from? How do you know that the ship you will build is an accurate representation of the actual ship? Have you got a pattern or drawings? Can you look at the actual ship? Is it still there? Is there a book that tells you how to do it?

To the last question, surprisingly, the answer is …Yes, there is a book.

The book is called The Sutton Hoo Ship Burial, by Rupert Bruce-Mitford. He was commissioned by the British Museum to assemble all the relevant information about the discovery of the Sutton Hoo find. This was such a mighty task that it could not all fit into one book, so there are four volumes. The book with the most information about the ship is the first one called Volume 1. The very first words in the book on the inside of the flyleaf state: ‘The Sutton Hoo ship burial, excavated near Woodbridge, Suffolk, in 1939, is the most important single archaeological discovery ever made in the British Isles.’ 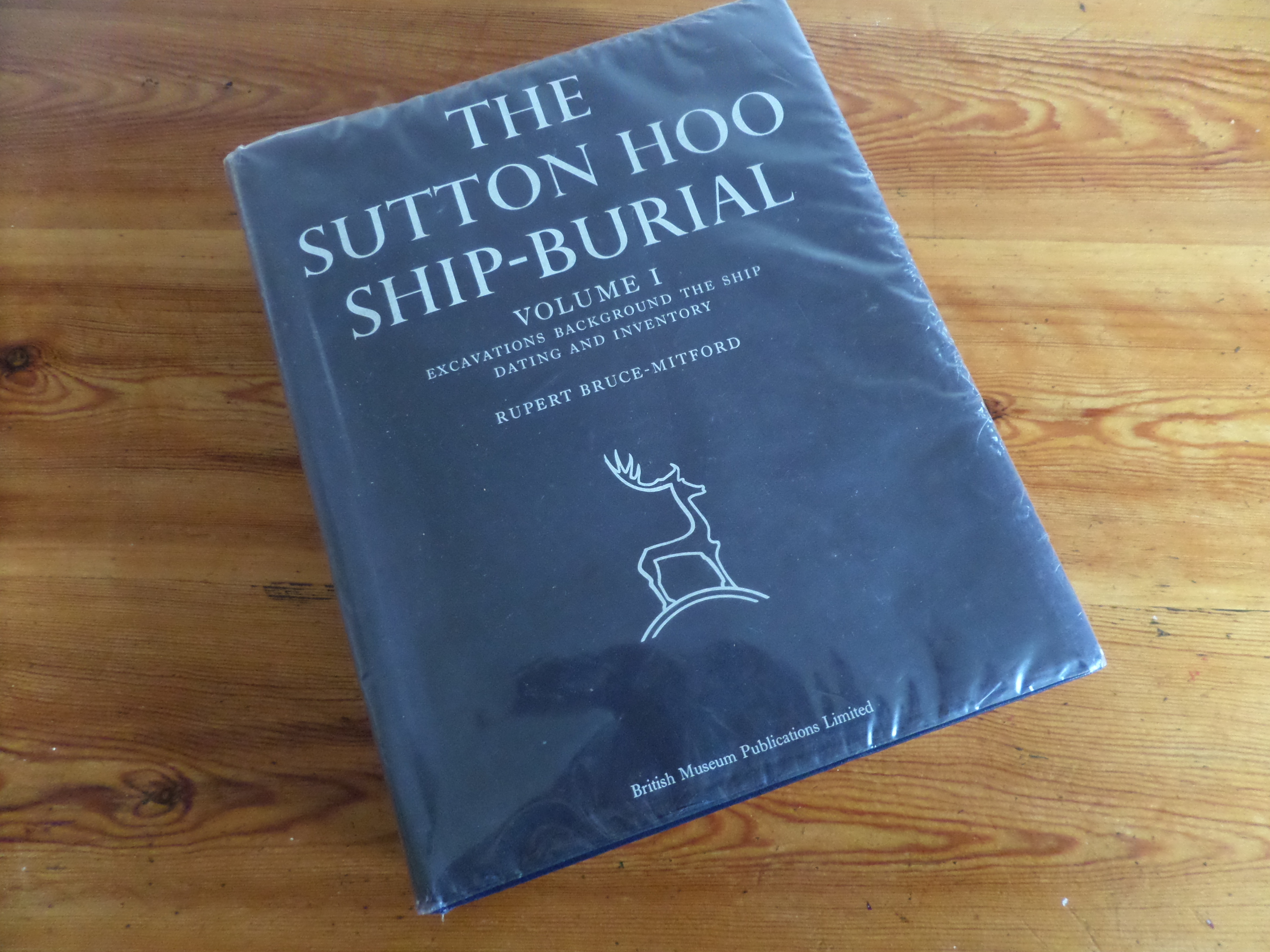 At the bottom of the flyleaf it says:

424 halt tone and line illustrations in the text

84 half tone illustrations of the coins

It was published for the Trustees of the British Museum in 1975. It is 2¼ins (60mm) thick and weighs 10lbs 8ozs (about 4.8kg). It is difficult to lift, impressive, utterly comprehensive to the point of being fascinating and the chances are that you don’t have a copy at home. It is the kind of book that could only be found in the reference section of libraries as the shelves in the lending section were hardly strong enough to support it. However, if you wished to acquire such a weighty tome today there is a chance that you could be successful, because libraries periodically review the books they hold and the frequency of their access. Books that have remained unopened for long periods may be sold and copies do turn up on eBay.

There are 792 numbered pages and this means that a huge amount of research and effort had to be invested into producing the book; too much for one man alone. Each chapter was therefore produced by Rupert Bruce-Mitford with an expert helper. Chapter 5 from page 345 onwards is by Angela Care-Evans. This chapter is the one which most closely covers the ship’s construction and it is divided into sections. The sections are headed:

The stem and stern posts

The scarphs of the keel planks and their position

i The evidence for the number of oarsmen

ii The Sutton Hoo ship as a sailing vessel

Chapter 5 is not the only place in the book where the account of excavations of the ship can be found. There are several other places where references are made to different aspects of the ship. It is important to realise that the ship was excavated both before the war and, after the war. The people concerned with the excavations in 1939 had very little time to closely examine what was being found and sometimes they offered their opinions by making educated guesses at the relevance of what they were seeing. After the war the people excavating had more time and they sometimes sought to corroborate or to elaborate on what had been suggested in 1939. This means that in the book there may be more than one description of certain individual details. There will be the 1939 version and then another later version or versions that were produced following a more careful and detailed post-war investigation.

Chapter 4 entitled: The re-excavation of the Ship and the Ship-Barrow 1965-70 by Paul Ashbee has a great deal of additional information. Section 6 within this chapter has some hugely valuable work by Valerie H Fenwick.

The various results from numbers of excavations and opinions means that it sometimes hard to pin down one definitive description of some detail, because it may have been recorded or understood in one way in 1939, but revised or interpreted differently later. The reader coming new to this authoritative, scholarly work may begin by thinking that they will find total certainty of all the details of the ship, but as they progress there is a dawning realisation that descriptions, or evidence, is often being presented for evaluation and interpretation for the benefit of the reader of the material. There is an evolution of understanding, because not all the experts agree on everything. The conclusions of a later expert may not be better than those of an earlier expert. Sometimes the reader will have to decide about their own 'interpretation' (note the use of this word) on the strength of the evidence produced. 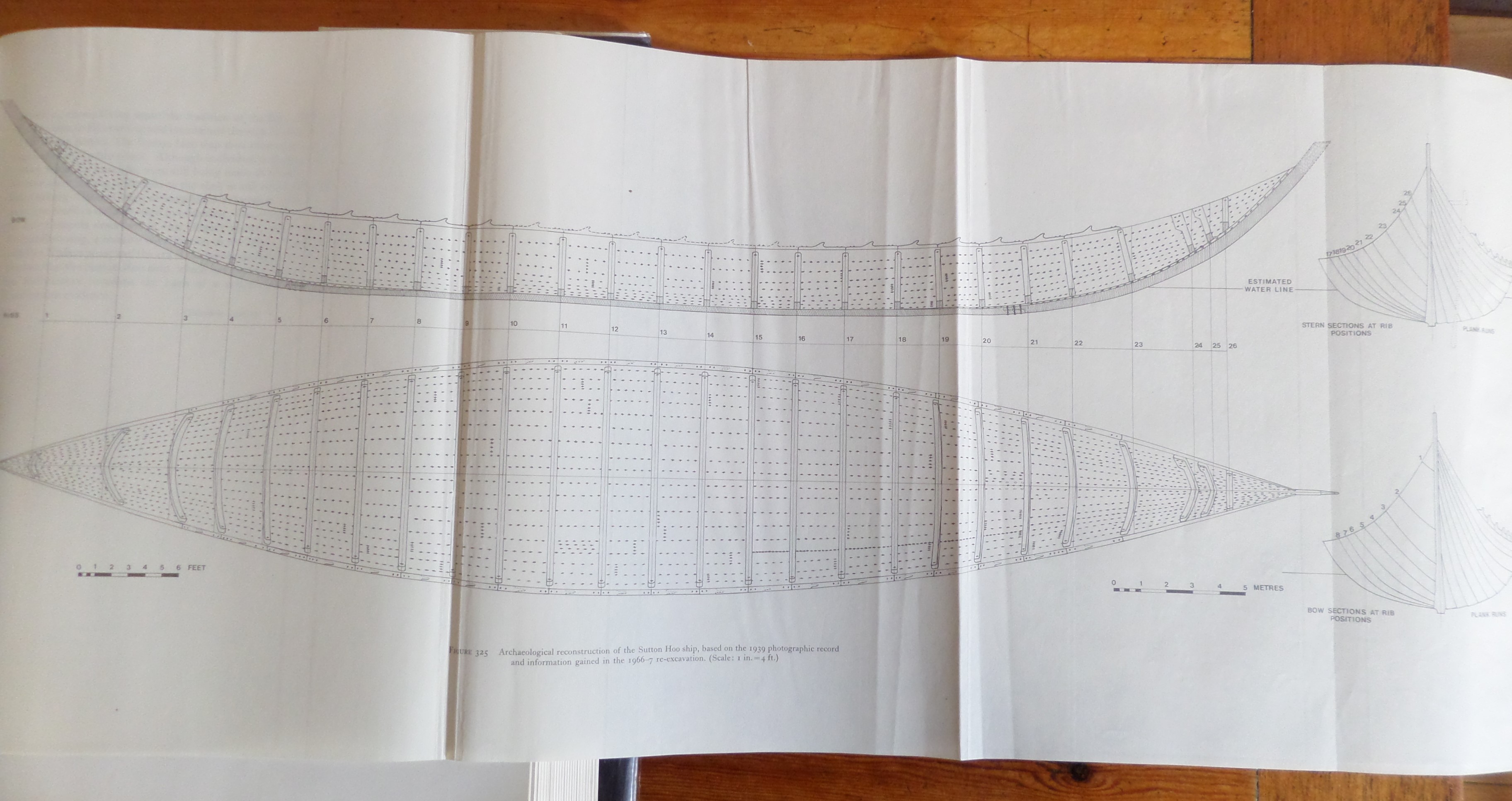 In the flyleaf descriptions of the contents of the book above, it mentions fold-outs. The ship is a very long object. There are places where it is desirable to show very long pictures to reduce the foreshortening distortion produced by showing it from one end. The classic examples of this problem can be seen when looking at pictures of bridges such as the Firth of Forth rail bridge, which is a very long, low structure, but is always represented as a short, tall structure in the stereotype photographs taken from one end, on shore. To appreciate the really long shape of the Sutton Hoo ship it needs to be represented with a side view using a photomontage, that is, a number of photographs attached to each other side-by side. To do exactly this there are some special pages over 2ft (600mm) in length that can be unfolded to illustrate information, at a size that can be understood. The alternative would be to print the side view at an impossibly small size to make it fit onto a page or across two adjoining pages, which is what usually 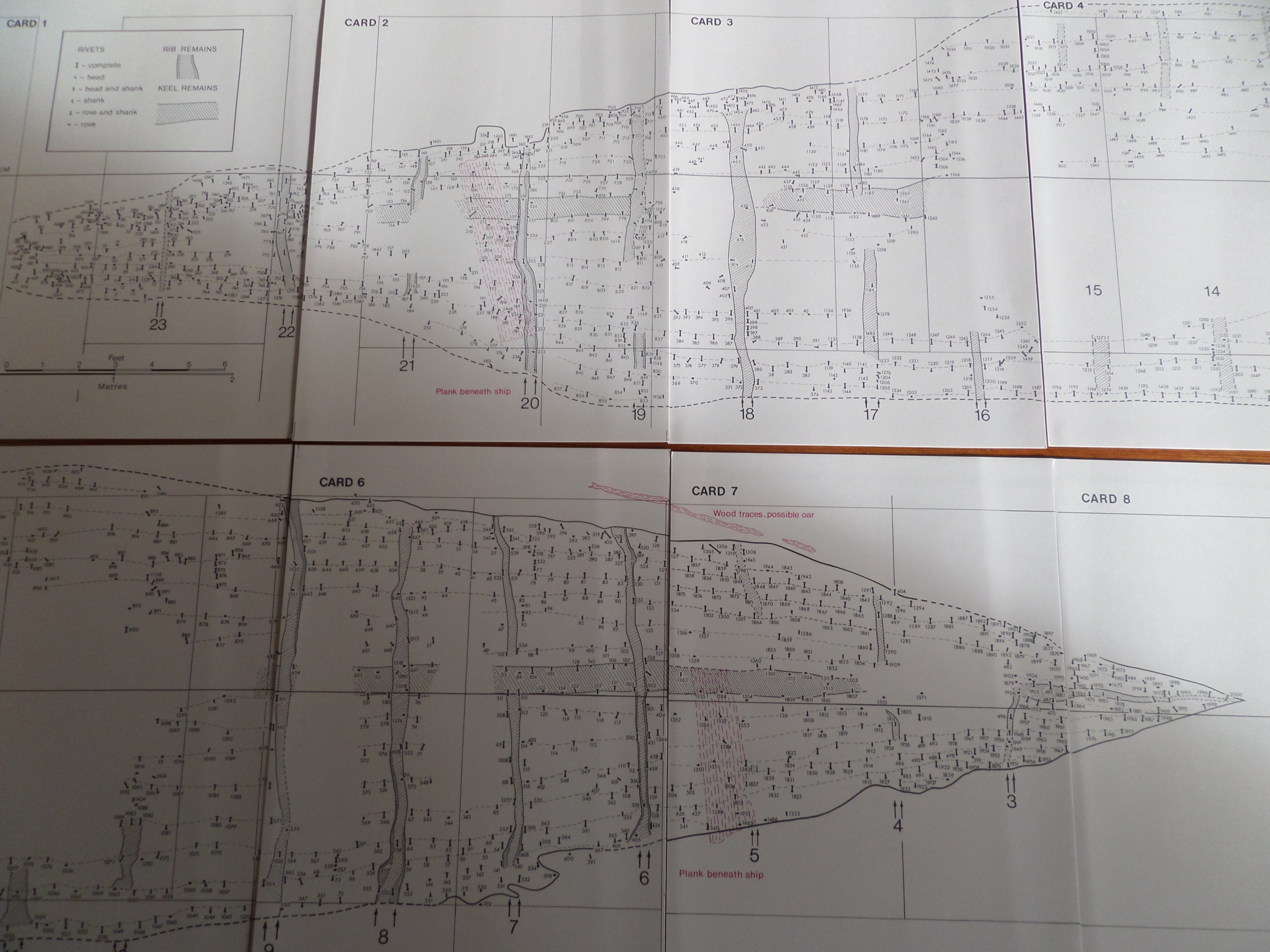 There is another way to illustrate the appearance of the length of the ship. Inside the rear cover is a pocket containing, amongst other things, a 4ft long photomontage of the ship, but additionally there are some cards almost A4 size which are numbered 1 – 8. When placed side-by-side the cards show the 2000 or so remaining rivets as they were positioned when they were recovered after the war. Many rivets are missing. Each rivet is numbered and its orientation is indicated. They are all preserved in the British Museum. To anyone coming new to the information the primary value of the rivet cards is that when they are positioned side-by-side they give a startlingly revealing picture of the destruction of the ship impression after the war. People sometime want to know why investigations into the ship impression couldn’t have continued after the war by just picking up where the pre-war excavation ended. One glance at the image formed by the assembled cards gives the answer … basically the delicate and vulnerable ship impression had been ruined beyond reliable truth. There is information to be extracted, but always with a huge number of question marks about real accuracy.

The leading academic investigator of the Sutton Hoo ship in 1939 was Charles Phillips a fellow of Selwyn College Cambridge and he kept a brief diary of events. From it can be seen what approximate activities took place on each day. The man who was in charge of surveying the impression of the ship for the Science Museum was Lt. Commander Hutchison (note NOT Hutchinson).

Lt. Cmdr Hutchison is pivotal to the whole investigation into the ship for only he had the most complete knowledge of its dimensions, its form and as far as could be determined, its construction. He had assistants and though not much attention has been paid to them until recently, they may become more significant as the investigation progresses.

It is the information that he gathered that is the key to our ability to attempt to build a reconstruction of the original craft. From the diary we can see how long he had, what actions he took and what extra investigations he thought necessary to establish the nature of the ship. In many ways this diary is the closest that we can get to the man who really had the knowledge that we would wish to have now. The diary paints a very personal picture such as this description of his first visit on July 12:

‘He arrived at Ipswich at 11.44am and was motored out to the site with Maynard (curator of the Ipswich Museum) by me. A preliminary inspection was made before lunch with Mrs Pretty at the house.

After lunch the inspection was resumed. Hutchison placed the whole matter of the study and survey in situ before Mrs Pretty who agreed that it must be carried out as and when the experts would be able to manage it.’

Hutchison began his survey on August 8 and concluded it on the 24th with some lengthy periods lost to bad weather, a mere 16 days at the most, for a 90ft craft. How different it might have been if there had not been the imminent prospect of war. Compare this with what might happen with such a find today.

The site was closed on August 25.

The war began on 1 September 1939 with the invasion of Poland and was declared by Britain and France two days later.