What is needed to construct the ship?

To learn about the ship one can be guided by the sections listed inside the flyleaf. These are some selected section titles that begin to break down the overall task of investigating the ship. In broad terms, these are the ‘pieces’ that have to be constructed.

The stem and stern posts

The scarphs of the keel planks and their position

When an investigation begins it rarely follows a nice orderly list such as this. It commences with a random searching for information, skipping backwards and forwards through several sources trying to discover what information is available. I will relate my personal experience at this stage to illustrate how not all information has equal weight, some things are more important than others. My priorities did not follow this list, because initially I was unaware of the book described in Investigation 1.

The appearance of the ship

My first requirement was to see the ship. What did it look like? I could not find a picture of it. This is because there aren’t any. There are some artist’s impressions, but they were not necessarily accurate and then there were also the foreshortened photographs of the excavation. The first reasonable illustration I found was on pages 26-27 of Angela Care-Evans’ book The Sutton Hoo Ship Burial (see Ship Discovery page on this website) with an artist’s impression by Alan Sorrell on page 28. On the advice of the British Museum I then discovered Rupert Bruce-Mitford’s book in the library of Imperial College filed in the section for Underwater Archaeology. In Chapter 5, I found Angela Care-Evans again. I later found all the Volumes in my local library.

Having found the book my immediate question was: How wide is the widest plank? This is because the most difficult dimension to achieve in solid timber is the plank width. The wider the plank, the bigger and older the tree has to be, in order to reach a size to produce that plank. I understood that planks cannot just be cut right across a tree trunk when it is viewed from the end. The grain pattern, the shape of the annual rings, of the individual plank have to be carefully selected. This technicality can be explained in more detail later, because it is essential to understand it; the Anglo-Saxons did. I was thrilled to find on page 354 of Volume 1 (this is the simplest abbreviation to identify the book) a table showing plank or strake widths where the widest plank was 12 inches. There are many missing dimensions in the table, but the vast majority of widths were well below this figure. At a stroke I could see that it was achievable to find timber this wide. It may not be easy, but would be possible.

The next concern was for plank lengths and here I learned that on the earlier Nydam oak ship (see Early Ships page this website) the planks were full length, which would be almost impossible for the Sutton Hoo ship. Fortunately a table on page 365 of Volume 1 showed plank joins where they could be distinguished and on the previous page it said that ‘ the commonest distance between the surviving pairs of plank joints was approximately 18ft (5.45m)’ There were shorter boards. To discover that planks could be made by attaching one to another was a further relief that made the ship build a possibility.

The scant information gathered to this point meant that the ship could be constructed. My personal journey now moved to reading the relevant chapters and trying to make notes. I found that the text is so packed with information that my notes were almost rewriting the contents of the book. The details that you may wish to know more about, as listed in the section titles above will be dealt with later, possibly as the ship is built, for there is a long investigative journey that precedes it.

The diagrams of the ship in Angela Care-Evans’ book are described in these words:Reconstruction of the ship based on the Science Museum‘s survey and the excavation photographs by Miss Mercie Lack and Miss Barbara Wagstaff. The rounded stern recorded by the Science Museum has been faired up to match the lines of the prow. 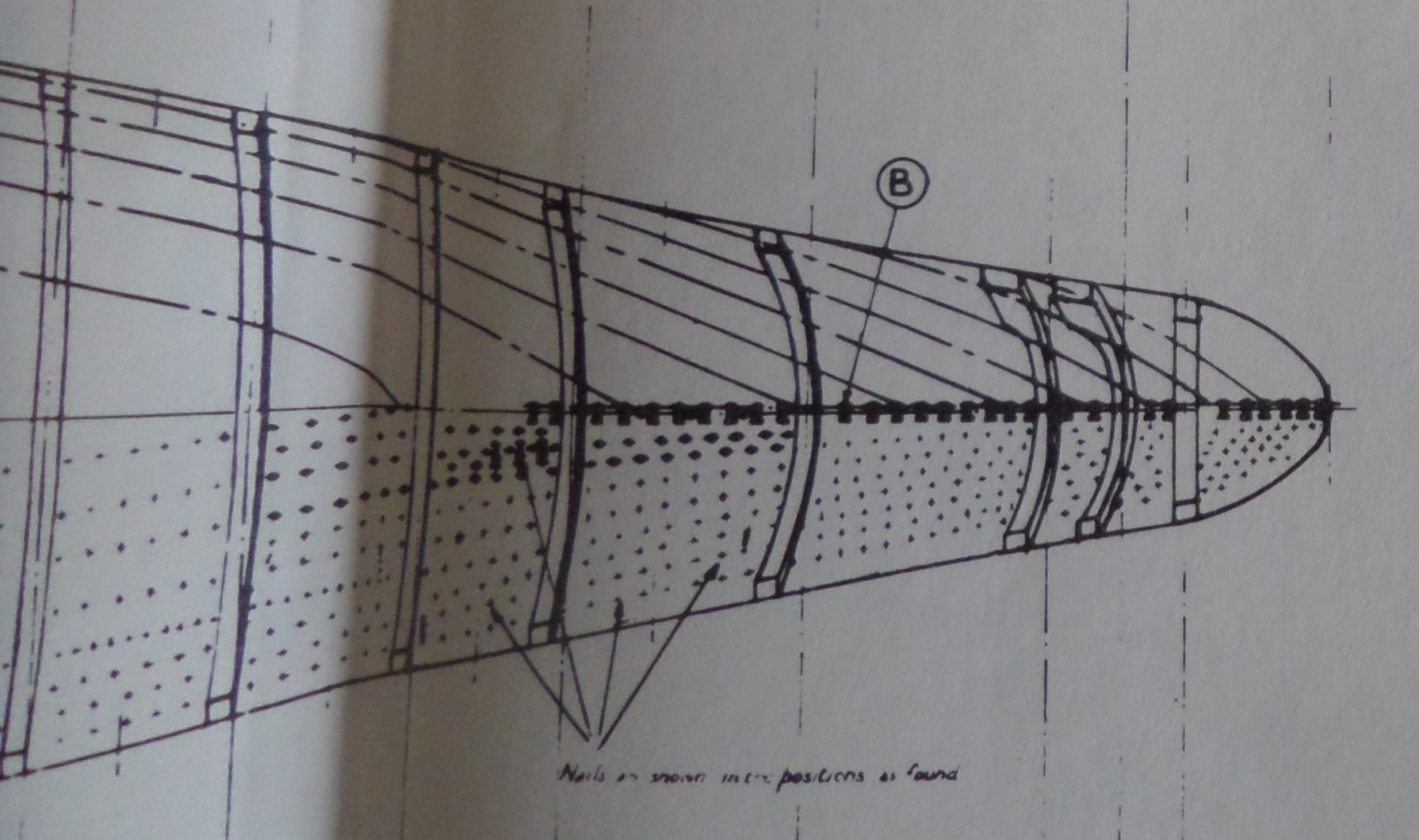 This needs some explanation for the uninitiated.

This information about the shape of the ship and the changing of the drawings is of great importance later in the investigation.

The illustration in Angela Care-Evans’ book is to be found in Volume 1 on a fold-out, interleaved in page 434. There are TWO fold-outs at this point. They were drawn in 1973 by Colin Mudie, a highly respected naval architect. The first is a Lines plan. Lines plans are a way of describing the skin-shape or the form of the outside of the ship. The second illustration has all the rivets and planks added to it to produce an image of what the ship might have looked like. This second drawing is the one that people recognise as being representative of the appearance of the ship. This is what people want to see. In addition to a side view or side elevation, there is also a plan view from above and two end views showing sections across the ship and the plank runs. The drawing is called Figure 325 and it is described in the following way:

Archaeological reconstruction of the Sutton Hoo ship, based on the 1939 photographic record and information gained in the 1966-67 re-excavation. (Scale 1ins. = 4 ft.)

It needs to be stressed that all this information will become very important to any understanding of the shape of the ship, so I repeat that these drawings date from about 1973-75 and they have been generally accepted as representing the form of the ship. Over the years very accurate museum-quality models of the ship have been constructed for various institutions and these models have always been based upon these drawings.

BUT, there is another illustration.

The SINGLE earlier drawing made in 1939 By Lt. Cmdr. Hutchison is to be found on a fold out facing page 259 of Volume 1. This is Figure 185 and it is described thus:

The Science Museum provisional plan of the Sutton Hoo ship.

Printed for discussion only.

It can be seen from this written description that this drawing appears not to be reliable. The words ‘provisional’ and ‘for discussion only’ indicate that it is hardly to be trusted. In the text relating to it there are further notes of caution that if they are read in isolation can be interpreted to mean that this provisional drawing should not be relied upon. The words used that can cast doubt on Figure 185 were written by Bruce-Mitford, but the context within which he wrote them is important. He was listing a number of reasons why it was thought to be sensible to re-excavate the ship’s impression after the war. He therefore lists all the points that had been considered as being reasons to re-evaluate the ship drawing from 1939. The very word ‘provisional’ can come to be seen as a condemnation to the new reader. The review of the ‘provisional’ information begins on Page 234 of Volume 1 and in outline includes:

He concludes by saying that ‘many points thus called for checking’ … and this would be justification for further excavations. He goes on to suggest additional tests and investigations that might be included in any new dig and adds that ‘it was considered that it would provide valuable training and experience for those likely to be concerned with the excavation of the other mounds.’ As a highly qualified and experienced archaeologist he concludes with: ‘The points raised, however, illustrate the differences between interim and definitive publication, and the dangers of relying upon provisional interpretations and suggestions.’ In a footnote he says that he has only included it ‘for reference’ as later work was used to ‘correct or supplement its mistakes and deficiencies.’ 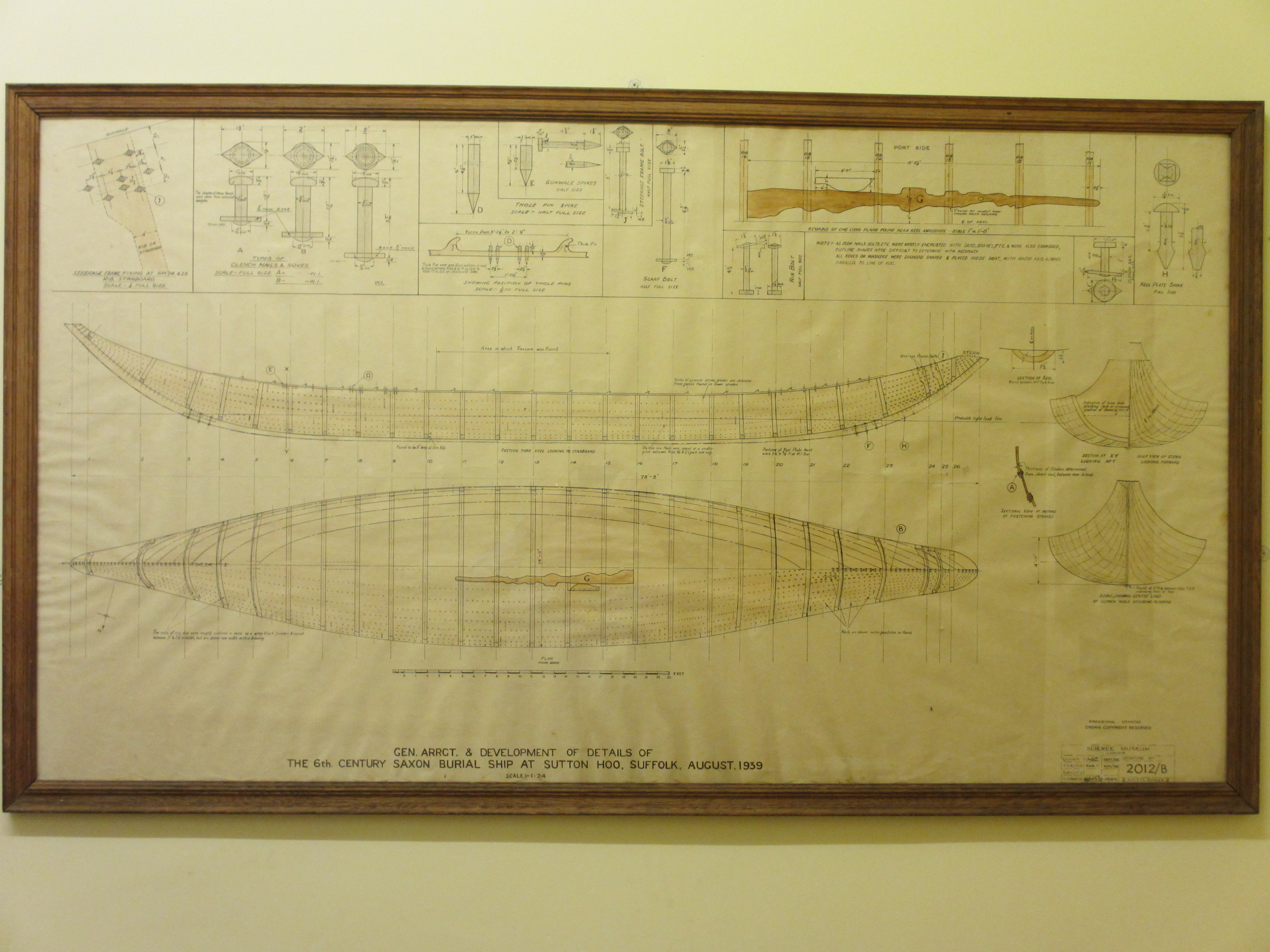 Now the bullet points above can be read as a condemnation of the old ship drawing at Fig. 185 especially when he sums up with general warnings of the ‘dangers’ of ‘provisional interpretations’ knowing that is exactly how the drawing is described. It seems to be an open and shut case. Could anyone trust it? Could you? Over the years people have heeded what they saw as warnings not to trust this drawing which the Science Museum didn’t ever get around to publishing.

But wait. Remember that the words have to be taken in context. He is correct in what he says, but he is also listing the reasoning used to justify recommencing work following the war. There are other phrases that he uses in his introduction to listing the problems from 1939 which begin to balance this cautioning approach. He has positive things to say about Fig 185 which seem to have been overlooked. He says:

‘The lines, that is to say, its architectural design as drawn by the Science Museum survey, were no doubt broadly accurate … It was unlikely that one could do any better by re-examining a hull which, if it survived, would certainly be damaged and deteriorated from the immaculate shape presented in 1939.’ This says that the survey was broadly accurate and couldn’t be improved upon even if the impression had survived. 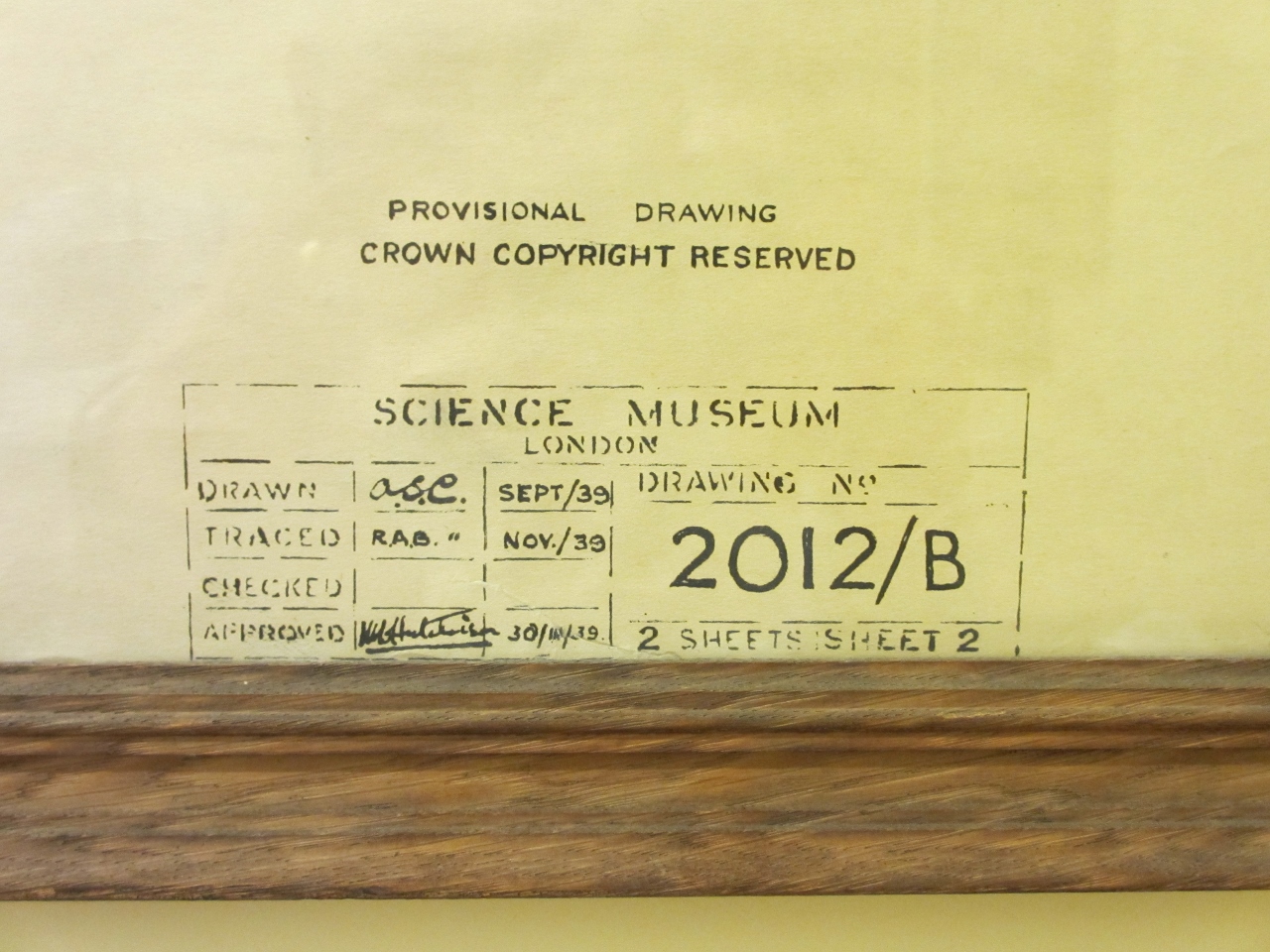 The original drawing for Fig 185 was thought to have been lost. It was first published by H Akerlund in 1963 in Nydamskeppen figure 94. The Nydam ship in Denmark/Germany has a number of similarities to the Sutton Hoo ship. They are often compared.

In the recent search for information for the present ship build, researcher Joe Startin found the drawing numbered 2012/B, framed and attached to the wall in a small anteroom called Anglo-Saxon Resource Room in the basement of the Ipswich Museum. It is hand coloured and has additional drawings of some of the metal components along the top. It was drawn in September 1939 by someone with the initials a.s.c. and signed off 30 October 1939 by Lt. Cmdr. Hutchison and traced in November 1939 by R.A.B.                                          The information box, bottom right on the discovered drawing

On page 235 Volume 1 states that ‘Commander Hutchison died in 1940 and any notebooks he may have had were lost.’ This a totally tragic state of affairs for the Commander, but also for anyone who wishes to know more about the form of the Sutton Hoo ship. I remarked earlier that: Lt. Cmdr Hutchison is pivotal to the whole investigation into the ship for only he had the most complete knowledge of its dimensions, its form and as far as could be determined, its construction. Without him we have to piece together an intricate jigsaw of clues and conflicting evidence to try to discover what he knew. Or do we? The person a.s.c. who made the drawing, immediately following the dig in September 1939 might also have had the detailed information in order to draw it.

When the rivet cards were mentioned earlier (see Investigation 1 page on this website) it was noted that the ship impression had been severely damaged during the war. The excavation was not back-filled, it was far too delicate. A report was commissioned and it is on page 228 of Volume 1. To offer some protection the hollow had been filled mainly with bracken. A picture of it in 1939 is on page 253. The army had requisitioned the area for training. Tracked vehicles were driven through the boat trench. Slit trenches were dug into the mounds and a great deal of live and expended ammunition was discovered after the war. A slit trench was dug across the stern of the ship destroying it from frames 24-25-26. The damage is described on page 239. A more detailed account of the wartime activities can be found in Martin Carver’s book Sutton Hoo Burial ground of Kings? Page 25 (see Ship Discovery page on this website). This book has been updated with additional information to be called The Sutton Hoo Story - Encounters with Early England see page 29.