As will be understood by reading Shipshape 2 the first main construction steps are to draw and then to model any details that need to be determined with accuracy. However, it might be mentioned that in the main, the workers building this ship were not experienced Anglo-Saxon shipbuilders, but local volunteers operating under the guidance of experts in their specialist areas. It will not be possible to name everyone involved, but a few names will be highlighted as the project progresses. My apologies for omission to the many not mentioned, without your input the ship could not be built. Elements of the project began towards the end of 2019, but then the Covid 19 pandemic stopped all progress for roughly a year.

In order to get some practice a number of wooden objects were made using axes, knives, blades, etc. some of which are listed here.

Holly hammers. The head of the hammer is a section of the trunk and the handle is a branch. 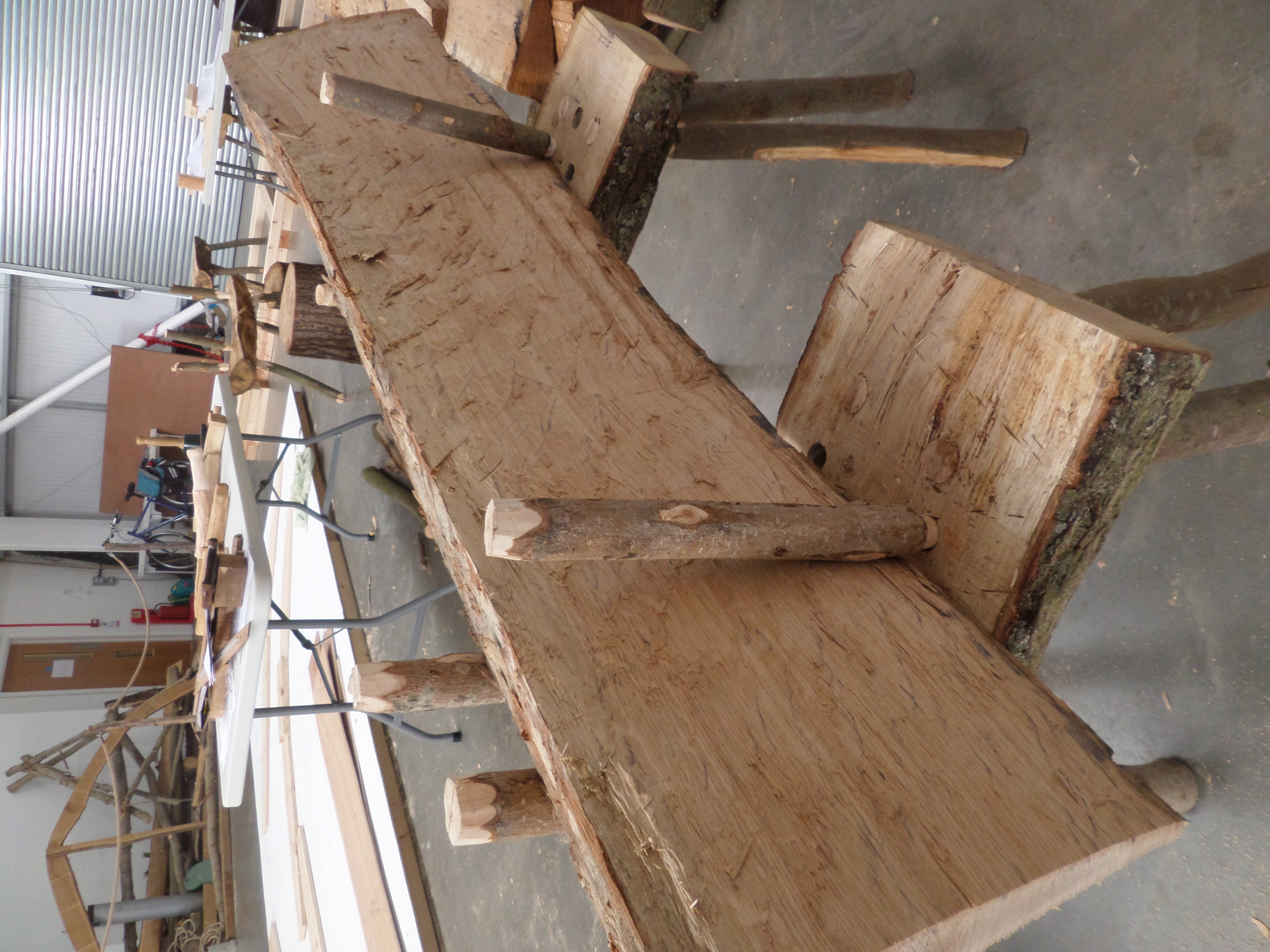 Trestles (Right) for supporting timber and for trimming planks. To trim boards, they have to be held on edge. The trestle legs are tapered branches fitted into holes in the ‘bed’ of the trestle. Planks supports are upright pegs fitted into the trestle top. These are shaped using a drawshave cramp trestle (below right). 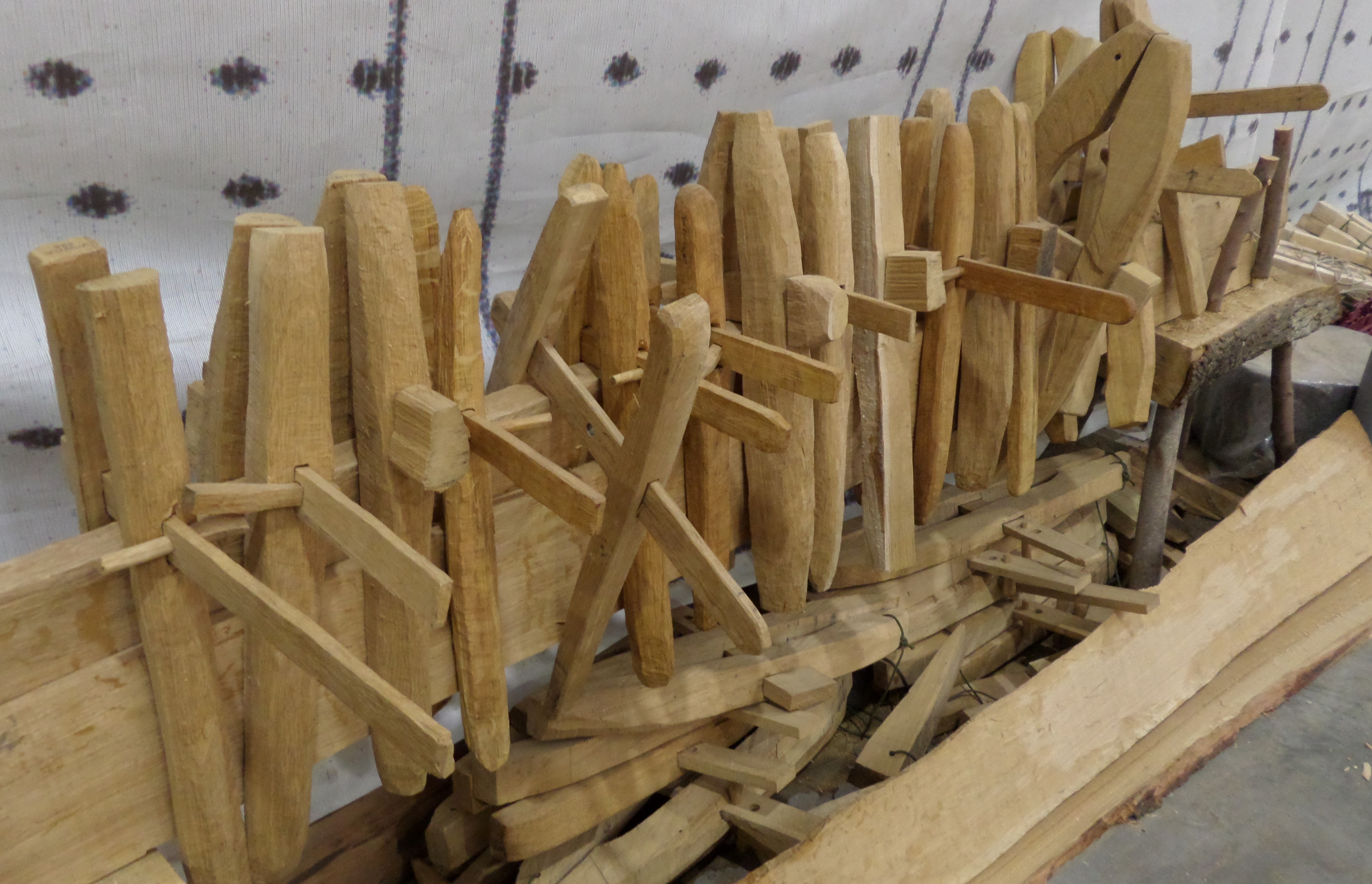 Hand vices (left) to grip boards and hold them together. The modern ‘G’ cramp equivalent does not have sufficient reach to grip wide boards together. These cramps get their grip by having wedges driven between the outer faces of the jaws.

Various wedges. Used for splitting timber, but also for tools, for adjustments and for fixings.

Treenails. (See Investigation 6b) Large wooden dowels with shaped heads, for locking wooden parts together. The head grips a

side and the other end is cut and spread with a wedge to lock it in place. Trenails are made from Willow. The picture left shows trial trenails linking plank to rib. In this trial section the oak wedges can be seen spreading the trenails on the inside of a rib.

The major ‘experiment’ for modern people is to rive the timber to split it down into plank-size pieces. This involves great skill in being able to ‘read’ the felled tree trunk to identify where weaknesses occur that can be exploited by driving in wedges to make, or to widen splits that naturally form in the wood as it dries. Before describing this in more detail, I should first deal with the lofting of the frames and the model making related this ship. We can return to the timber in Shipshape 4.

The drawing process has been described in Shipshape 2, so a couple of pictures will give an idea of what happened in the Longshed for lofting and construction of the frames, which were then stacked ready for use. 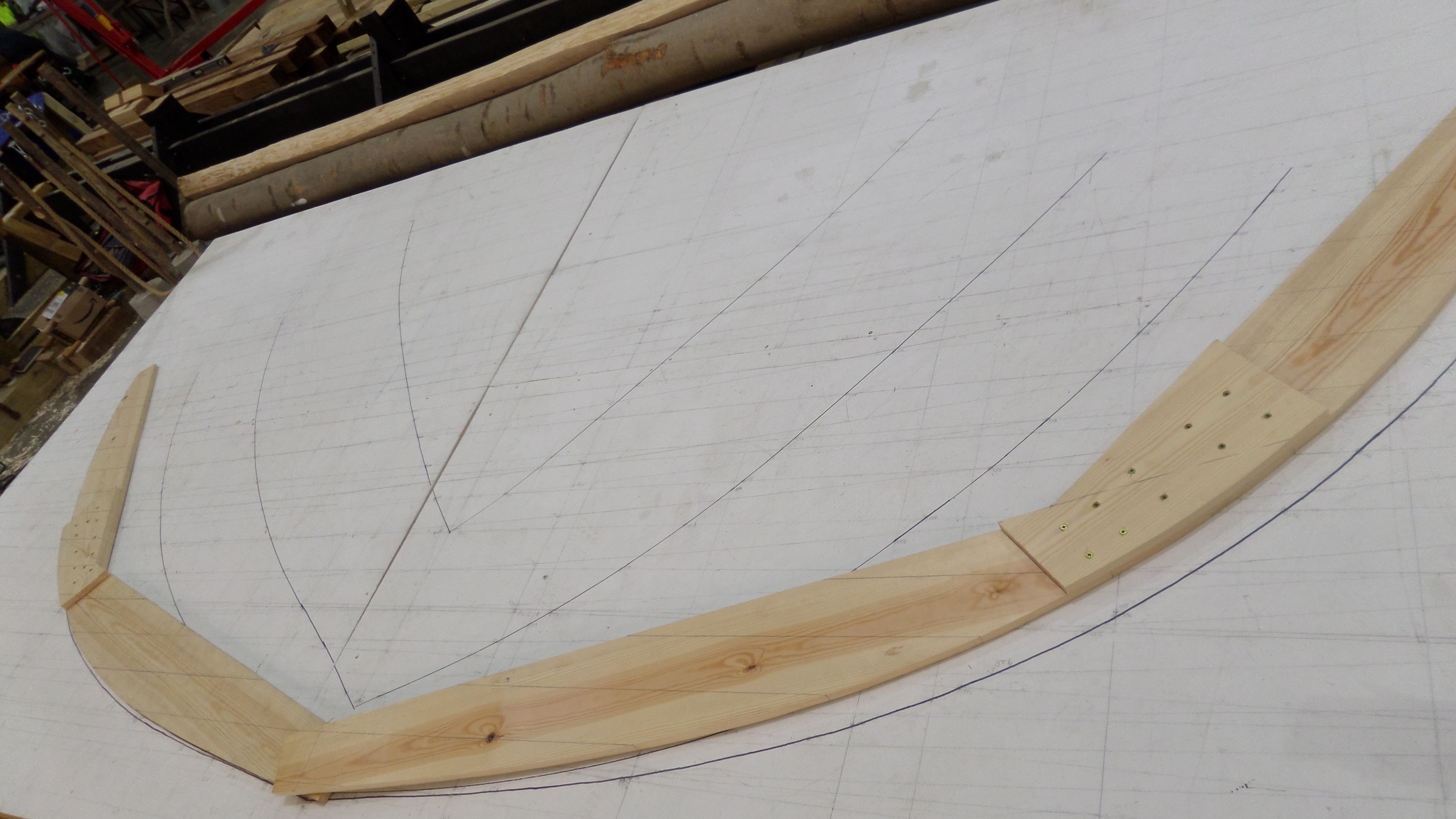 Above. The Lofting board with some major frames highlighted.

Below. The frames, stacked ready for use. 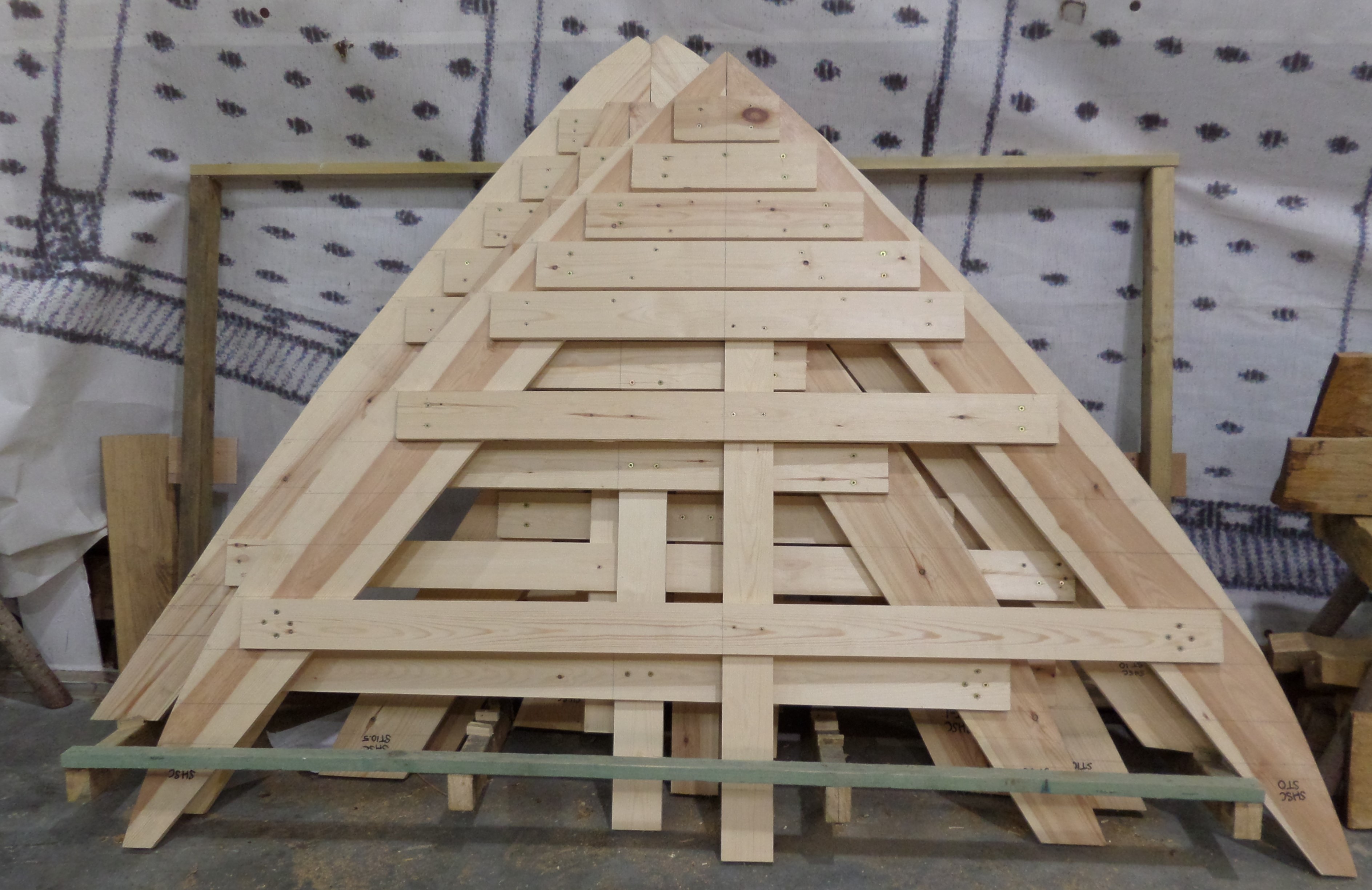 John Cannon an enthusiastic and meticulous model maker with volunteer assistants was charged by the S.H. Ship’s Company (committee) with constructing a 1:5 scale model of the ship. Here are pictures of the early stages of that construction. Amongst other things, the fundamental purpose of this was to try to accurately determine the planks runs for the ship. As these have not yet been mentioned, some explanation will be required. 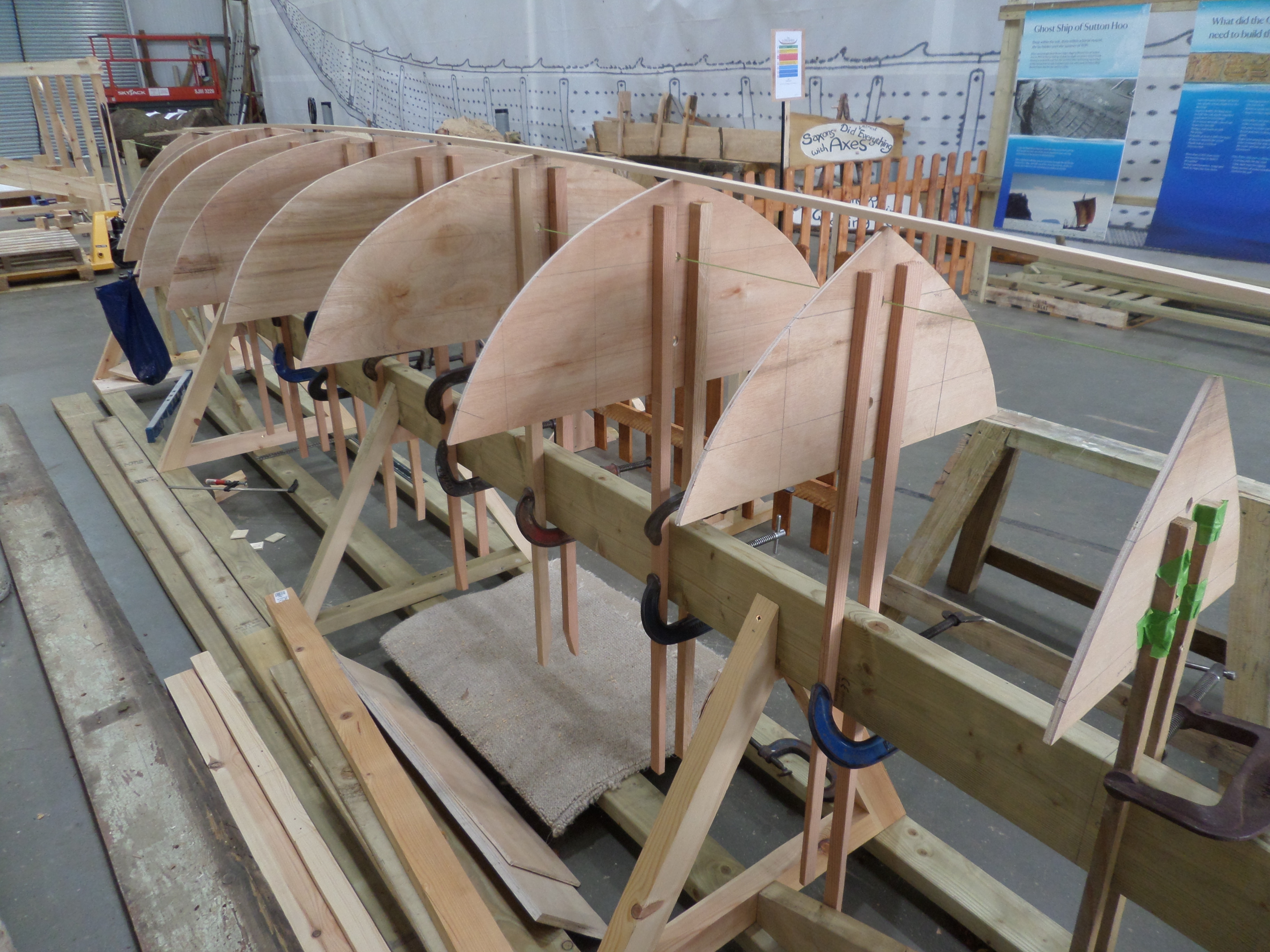 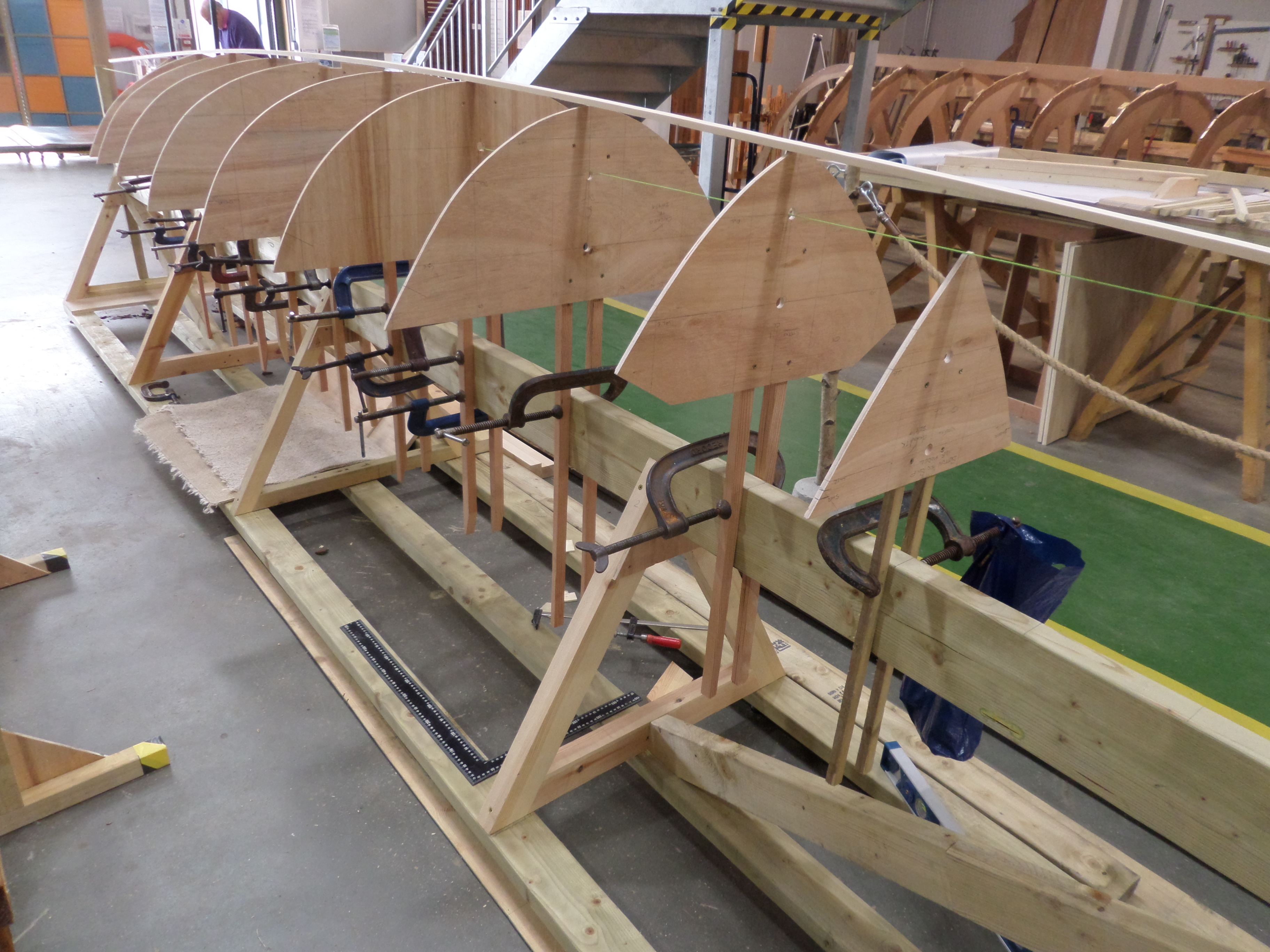 It will be recalled that the smooth form of the craft was determined in Lines drawings by the Naval Architect Paul Handley (see Investigations 4 -7) as commissioned by the committee. However, the craft is clinker built, that is, it has overlapping planks or strakes attached to each other forming the skin. To the uninitiated it would appear that the shape of the craft could just be covered in straight pieces of wood, but this is not so. Due to the complex ship-form that is narrow at the ends but wide in the middle, all the planks have to be individually shaped. Most planks are actually ‘banana’ shaped and it is an undertaking of great skill to determine the correct shape of each plank, before 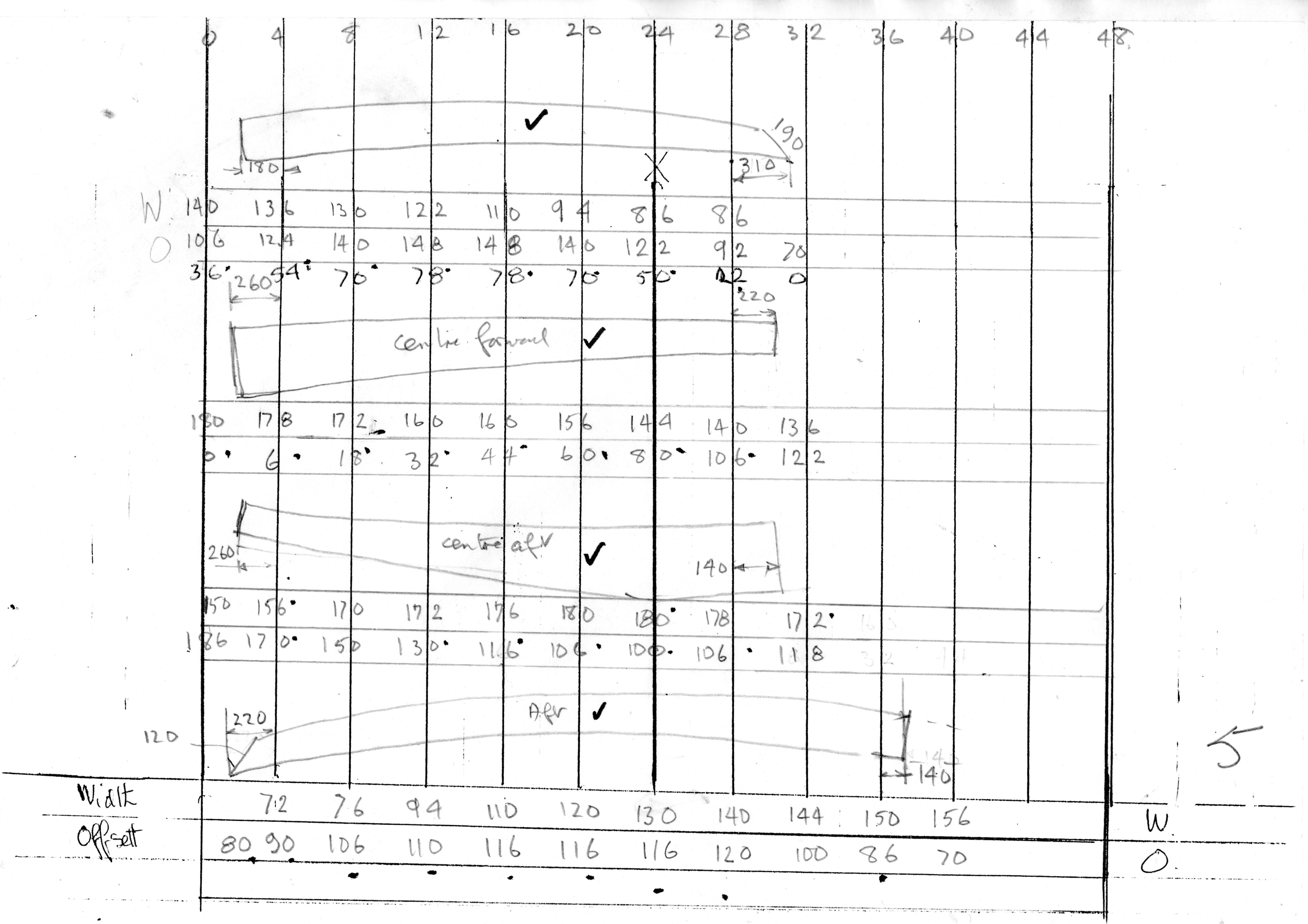 making it. As Edwin Gifford’s Sae Wylfing was constructed, notes were made of each plank shape. It has always been a great relief to everyone concerned that the original planks used were not the full length of the ship as in the Nydam ship. They were made up of separate shorter pieces scarfed together (Investigations 8) meaning that the wood would be easier to find and to handle in manageable lengths.

This is an image of Edwin’s notes relating to strake 5.

Attempting to use computer manipulation for illustrating plank runs, the committee sought out alternative computer expertise together with an historical advisor, to produce images suitable for virtual-reality viewing. From this work came some impressive multicoloured 2D images that were inspiring on paper and exciting in 3D virtual reality (see below right). They prompted John to make a breakthrough in understanding, as will be explained below. 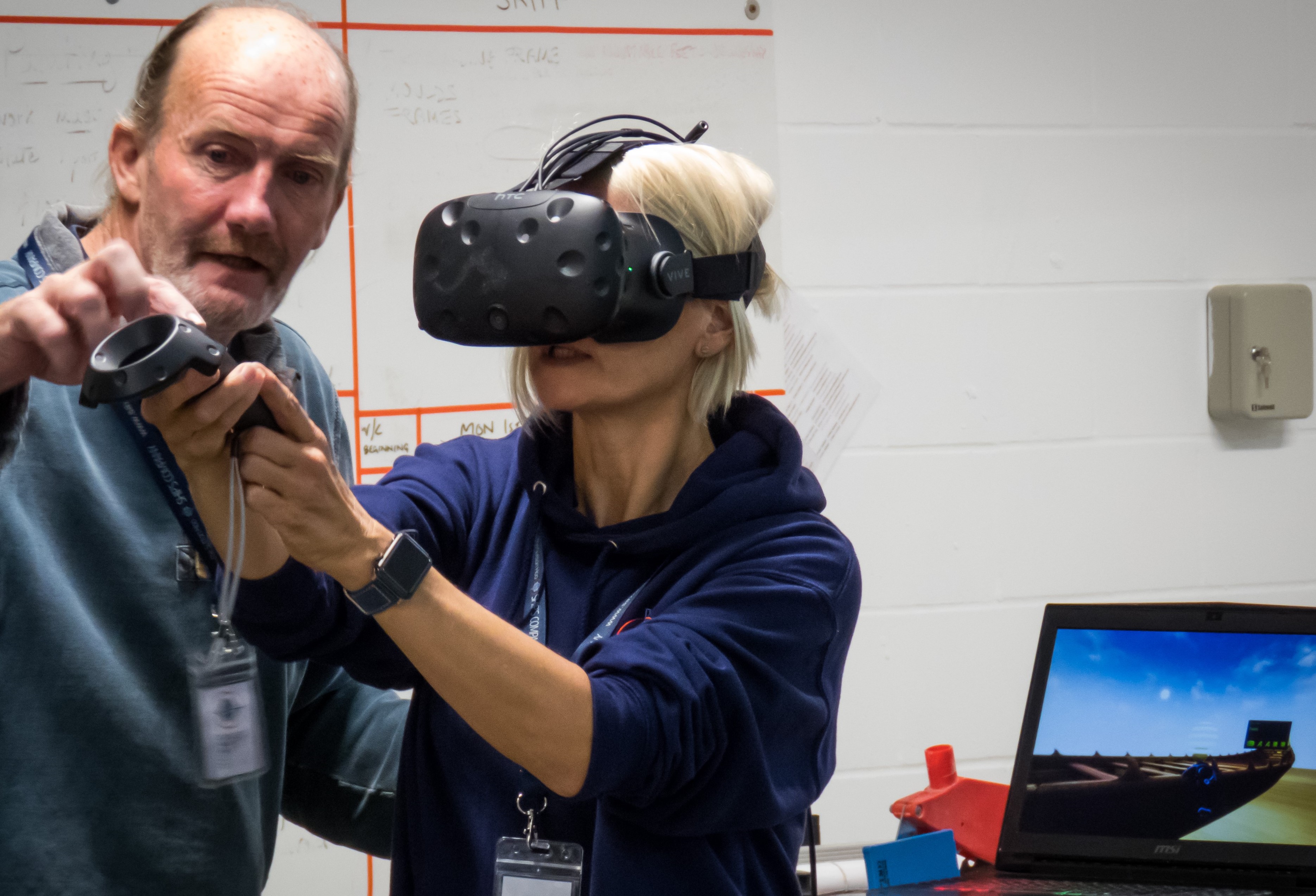 Taking a new look at plank runs was needed, because it had been shown by Paul Handley some years previously, (see Investigation 6 notes on Fig 185 Provisional plan and Fig 325 Plank & Rivet plan (images at page 434(2)), that the diagrams which apparently had planks runs marked on them in Volume 1, were not calculated plank runs, but merely ‘illustrative’ planks added to project the concept of what the boat might have looked like. The illustrations were not REAL plank runs. Paul Handley was NOT involved in calculating plank runs, he had simply made it known that the illustrations could not be used for them. 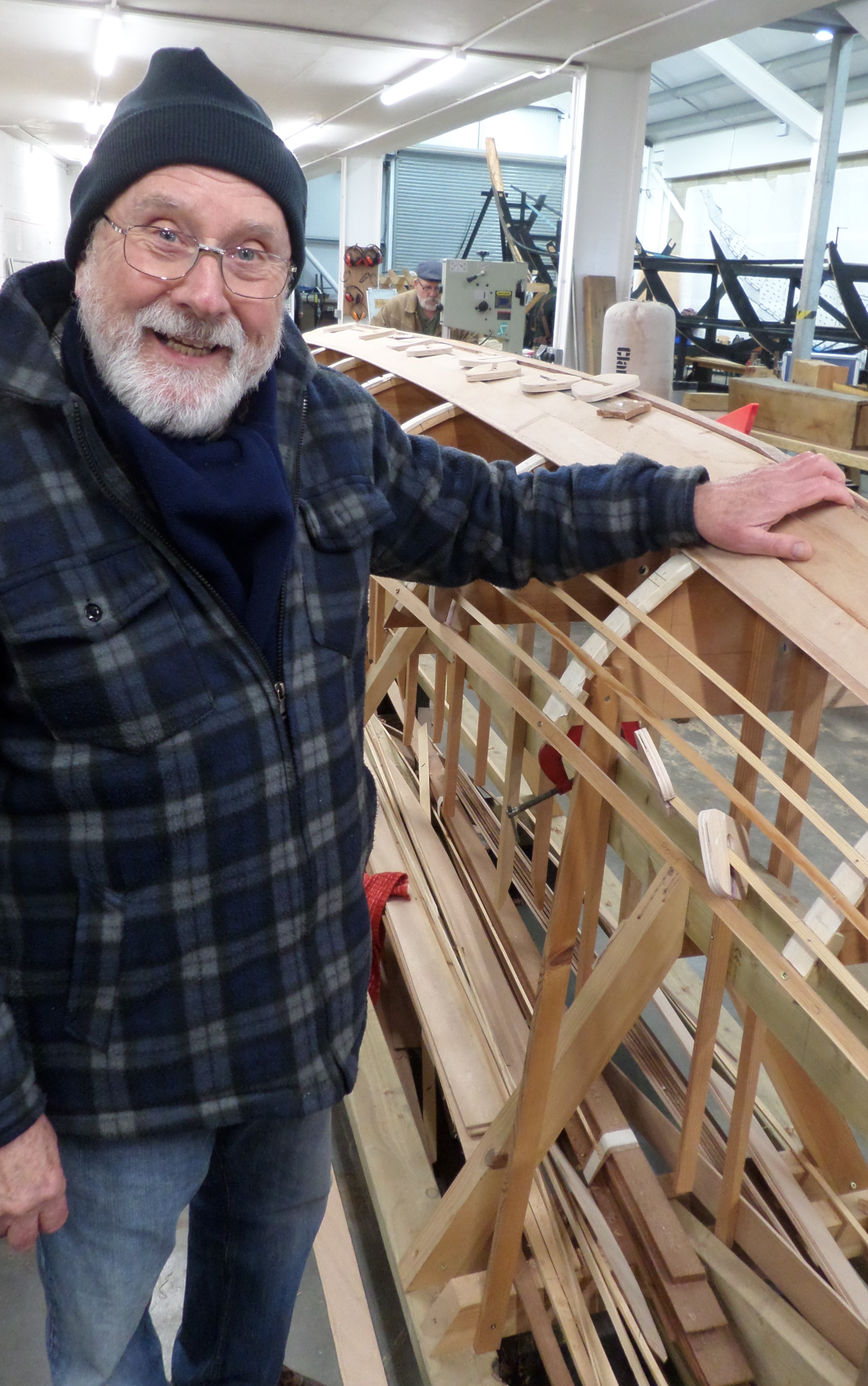 John Cannon’s (see left) challenge was to make all the information work in a one-fifth scale model. It is interesting to see that this proved to be difficult, showing how important the model-making process can be. He had to return to earlier research including the now familiar Table 19 (see Investigation 10), but also to some of the photographs in Volume 1 which showed precisely how the planks were arranged when uncovered in 1939. He then made a 1:20 scale model to try to resolve the problems in all the information. The really good news is that he came to a very important conclusion regarding plank widths which solved a most-important, long-standing question as outlined in Investigation 8 in a section headed A challenge. John recorded his findings in a short report and the following may be convenient in understanding these extracts:

The hood end is that part of the plank that joins to the stem or stern.

(John Cannon's words in italics. My comments in blue. My highlighting in bold to emphasise John's important conclusion.)

The (New drawings) had ‘a substantial difference between the plank/stake widths and their run to the hood ends from those drawn and described in Volume 1. In Volume 1 the garboard is the narrowest plank.

The (New drawings) have the garboard as the widest. This a modern convention.

The plank run to the hood ends in Volume 1 is described as high and sweeping narrow planks.

The (New drawings) have a much more ‘conventional’ plank run which to modern eyes seems logical. The reference for this and the wide garboard is Ian Oughtred.'

(Oughtred was not in consultation, the material used was from Chapter 3 of his published Boatbuilding Manual (P.C.)

'While building the 1:20 scale model which was planned to reflect the Volume 1 construction but on the (New drawing’s) Lines plan, I realised that the narrow garboard is essential to developing the high sweeping plank run to the stems.

We have run 9 battens along the girth of the 1:5 model with a narrow garboard and this has been a great success in replicating the Volume 1 high sweeping and narrow planks. (see below)

The keel of the S.H. ship is usually described as a plank keel … it definitely can’t be described as a modern vertical beam keel. A narrow garboard and P2 (plank 2) would support the keel better than a wide plank especially if it is combined with a wide lap where the planks and keel overlap.'

John Cannon extracts from Table 19 of which he fully understood the shortcomings as described in Investigation 10 (P.C.)

'The only reliable conclusion from Table 19 is that P1 (garboard) is the narrowest. There is some indication that P2 is slightly narrower than P3 - P7'.

John's had arrived at his conclusions quite independently of Edwin Gifford who in the 1980s constructed an operational craft 'Ottar' using building methods based on the S.H. ship. The primary constructional point that Edwin noted in his booklet Anglo-Saxon Sailing Ships (Pg. 8) is 'The scarf connection between the keel and the stern and stem posta is weak and quite unable to carry the weight of the posts, which had to be supported until the planking was finished. Thus the planking secures the posts and not vica-versa, as is normally assumed to be the case.' This reinforces John's conclusions that the Anglo-Saxon construction was different from present-day practice. John also revealed the reasoning behind why they did what they did. A prime result of 'practical archaeology'.

To gain further knowledge it was decided to build a full-size, half-hull section of the middle of the ship to determine a number of missing details, some of which are: 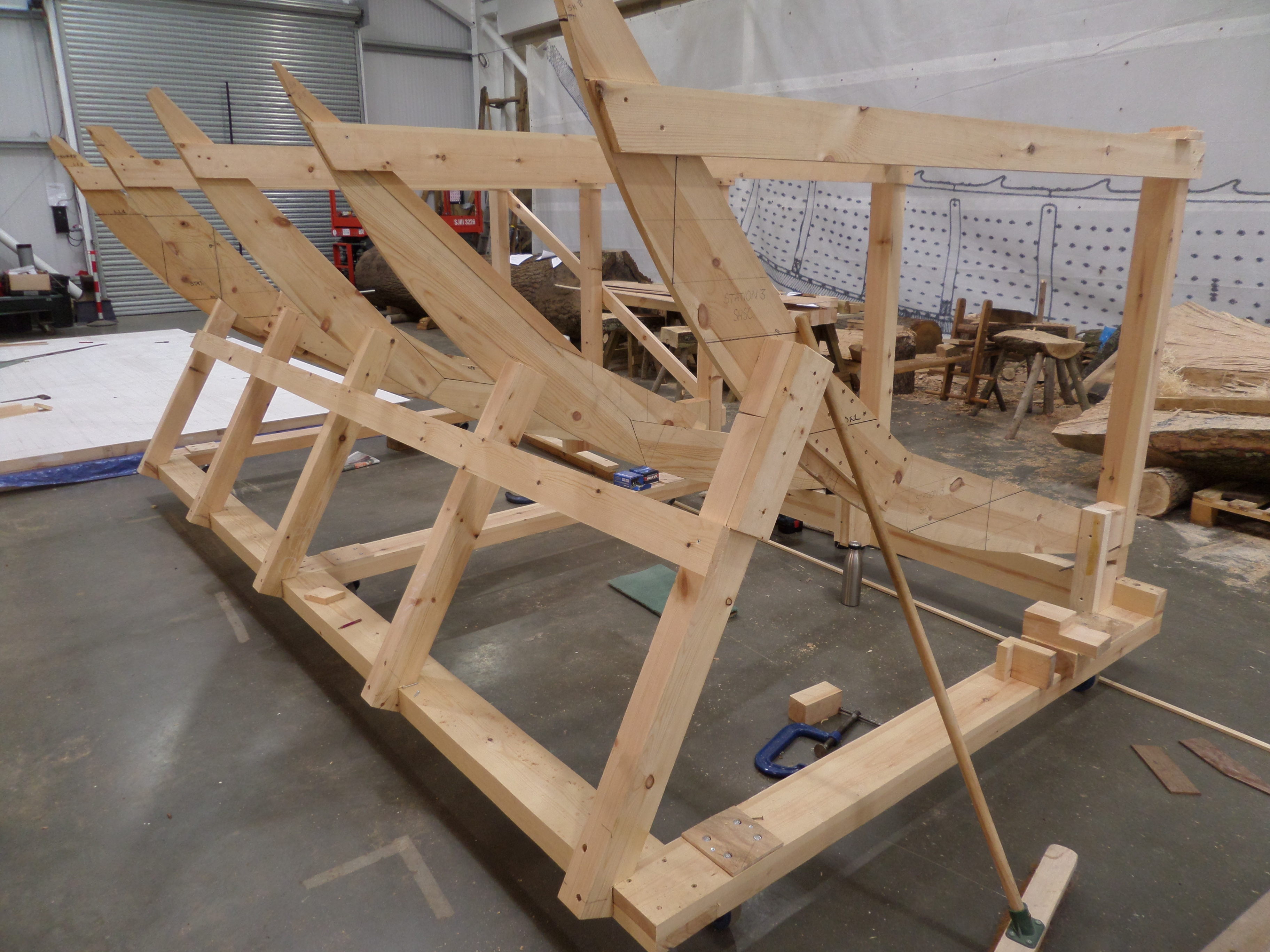 Plank to keel, plank to plank, rib to plank connections

Location of tholes relative to thwarts (fore and aft)

In order to do this, it was NOT necessary to completely use authentic materials, so plywood and softwood could be used as well as metal joining brackets and modern tools. There were many internal frames to ensure correct dimensions. It was possible to experiment with authentic materials and techniques during the construction, so hewn planks could be attached to each other and shaped, oak ribs could also be incorporated. The completed model was eventually built in two halves and then linked together (Below). Planks are being attached on either side of the keel

These are some of the selected details. Further pictures will be included in Shipshae 4 showing how the the model developed.

Garboard to Keel. (Below left) The actual keel will be a single piece of timber. The frame is marked G1 for Garboard. 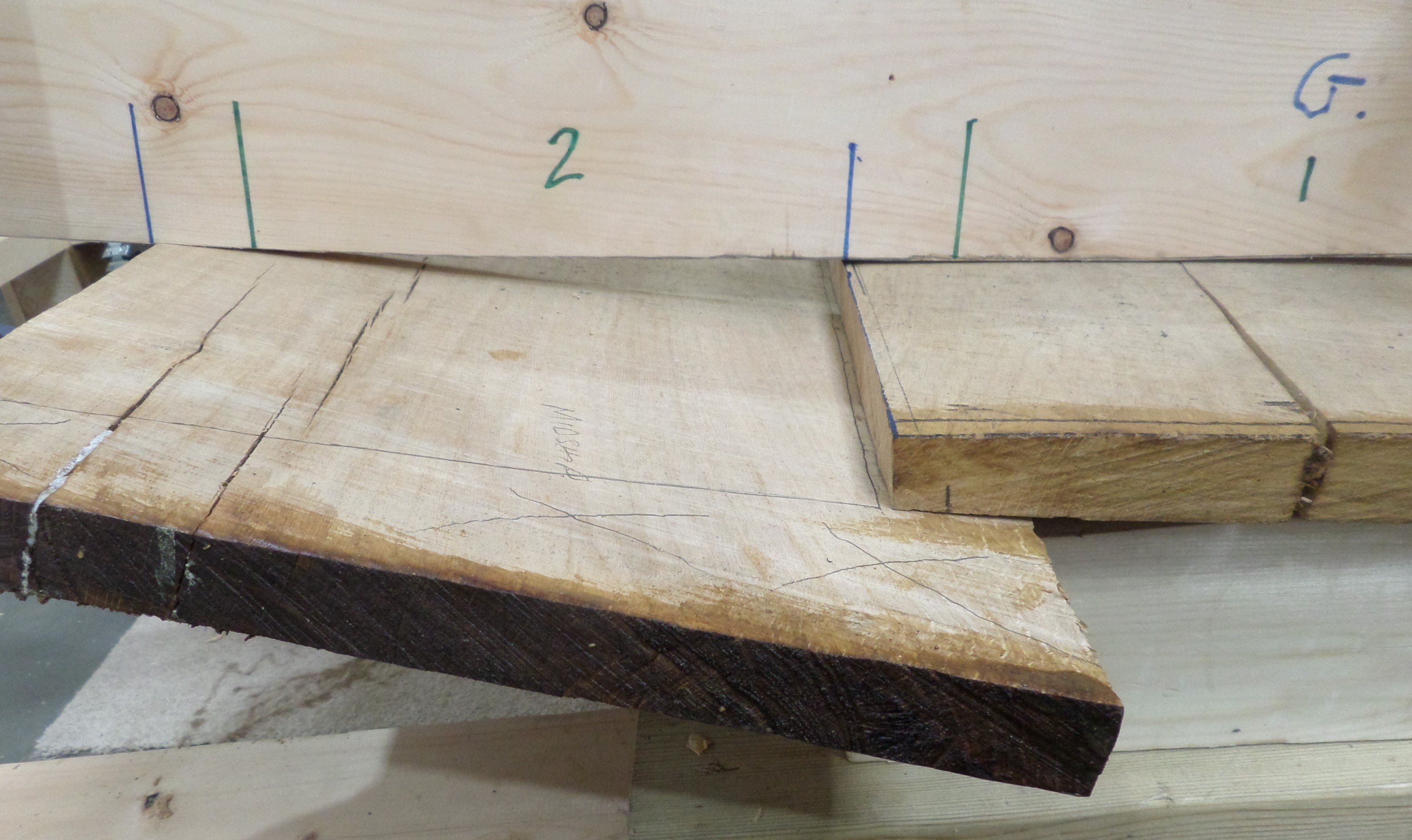 Plank to Plank. (Above right) The lower edge of the Garboard plank is planed to a slight bevel to allow the next plank to join at an angle. As the hull becomes more curved further outboard, this back bevel becomes steeper. The ends of planks tend to split as they dry 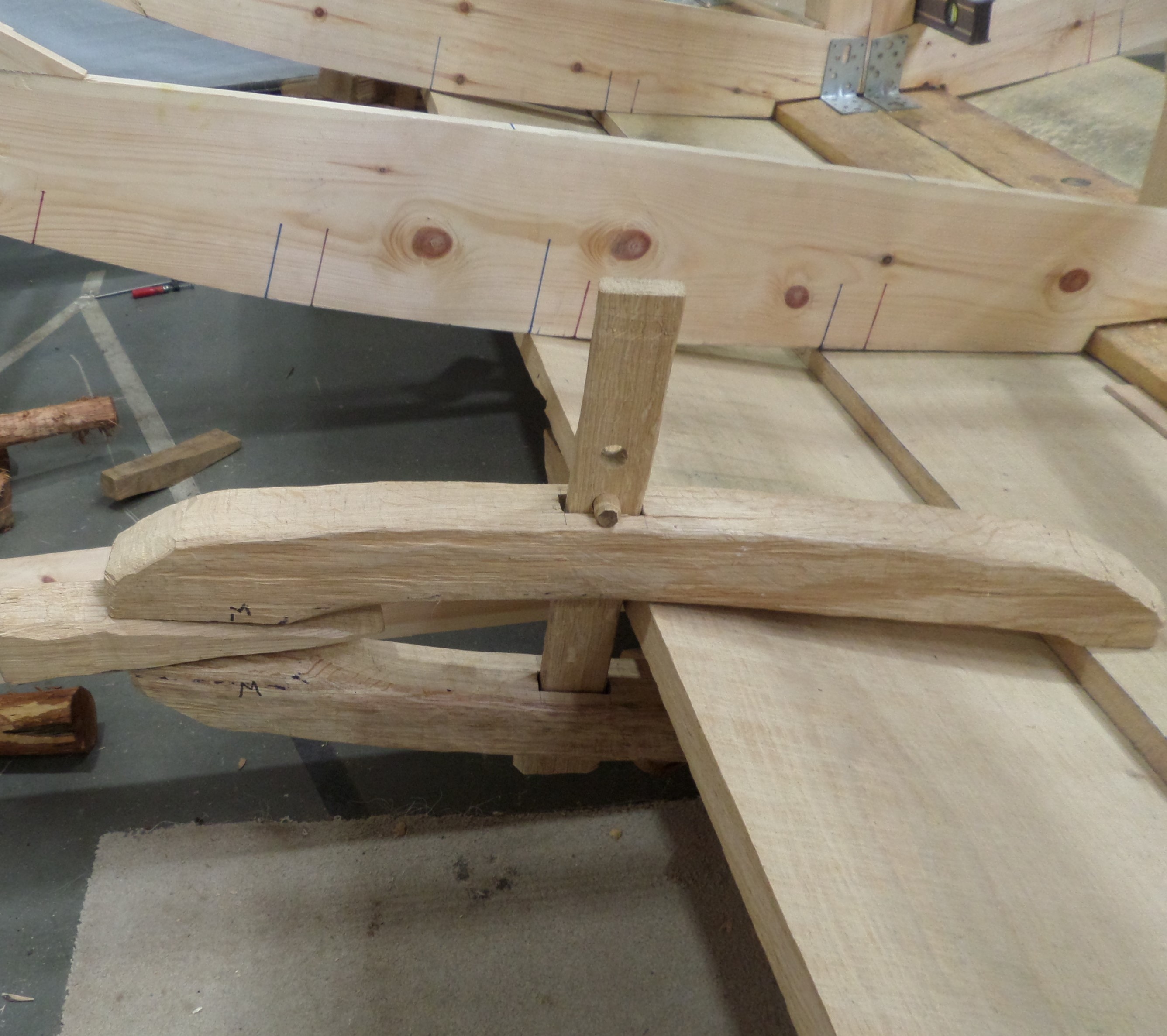 out so the end has been sealed to try to limit this damage. It can be further controlled by using correctly riven boards. The softwood former has the width of each plank and the overlap marked on it. Each frame will be marked in this way.

Hand vice in use. (See also picture at top left of page) The wedge driven in between the jaws on the left, provides pressure to grip the boards together on the right. When the planks are secured they can be drilled and secured to each other using the rivets.